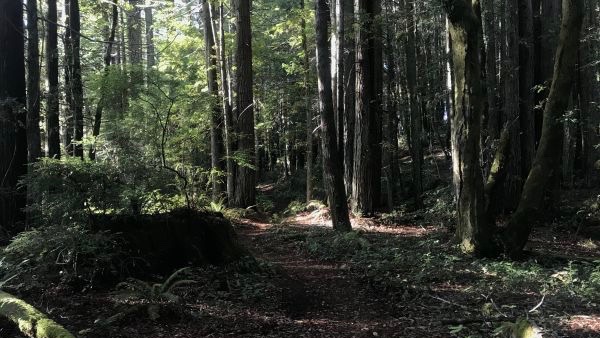 LITTLE RIVER, 3/3/21 — The conflict over logging in Jackson Demonstration State Forest continues to simmer. On March 21, the Mendocino Trail Stewards, a small environmental group, met with Cal Fire representatives Helge Eng and Mike Powers at the March 21 Capsar community center meeting to discuss multiple timber harvest plans lined up for the forest, and continue their advocacy for a 20,000 acre reserve on the west side of Jackson, a one year moratorium on logging in the entire forest, and a mediated discussion between their group and Cal Fire, possibly organized with staff from the offices of Senator Mike McGuire or Assemblymember Jim Woods. This is all at the same time as the Coyote Valley Tribe of Pomo Indians is preparing for a government to government consultation with Cal Fire over some of the same logging plans.

The two groups at the meeting both seem to believe they know Jackson Demonstration State Forest, and how it should be taken care of, best.

In a familiar Cal Fire versus local conservationists fight, the Mendocino Trail Stewards claimed that what they heard from Cal Fire didn’t reflect what they see as everyday users of the forest.

While Cal Fire touted their research program and use of selective logging (as opposed to clear cutting) to create a healthy, late succession forest, and the importance of forest management for fire suppression, the Mendocino Trail Stewards claimed they see overgrown chunks of land filled with small trees, slash left out for years after timber harvests, and trees as big as 77 inches in diameter marked to be chopped down. The Mendocino Voice has not gone to any of these locations in the forest to confirm these claims.

“Jackson doesn’t look like it does today by accident, the natural wonder that it is. It looks the way it does not in spite of the state’s management but because of it,” said Eng, deputy director of resource management at Cal Fire now. “I firmly believe that there is not a distinction between conservation and commodity production.”

Eng went on to promote the necessity of active management in order to protect Jackson from being ravaged by wildfire, noting that years of fire suppression and forest mismanagement have put California in a situation where many forests are extremely dense and therefore at greater risk of burning, and of burning fast and hot, than if they had been properly managed.

“I respect your love for this forest but I disagree with a lot of what you have to say,” said the Mendocino Trail Stewards co-founder after Helge Eng closed his presentation on the management of Jackson.

“My real problem with logging to reduce fire risk is that we talk about thinning but we aren’t paying to do it, we’re trying to make it commercial,” he said. “Money must be made so we pull out resilient trees,” he continued, using powerpoint to show pictures of trees he claimed were between 48 and 77 inches that seemed to be marked for the axe, with a blue line spray painted on the tree’s bark. “Thinning has to be done with government money, not expecting timber companies will make money off of it.”

But at this point in the meeting, Eng had already mentioned the large trees included in some of their logging plans, explaining that if Cal Fire harvests a large tree it’s only because there are other trees that are at least as large ready to fill in behind them. “That is the definition of sustainable development,” he said.

But again, Swimmer disagreed, highlighting the drastic divergence in world view between the two and the missions they represent. “Cutting down trees just because there are other big trees doesn’t promote late succession.”

Swimmer and Eng clearly have very different ideas about how Jackson Demonstration State Forest should be best cared for. Even on things they agree on, they promote different methods. For example both Swimmer and Eng, and, probably, everyone, is concerned about wildfire risk. But Eng again and again during the meeting claimed that active management is the only way forward to protect from fire.

“It may seem tempting to conserve forests with no management but fires make this risky and unsustainable,” he said.

But Swimmer made clear that he worries that active management will lead to the cutting of large trees, which are more valuable, and leaving small trees in their wake, trees he referred to as “kindling”

The one thing they both seemed to agree on is that a mediated discussion between the two groups would help them move forward and make progress in finding a solution to their disagreements. However there is not yet a timeline for when that might take place.

The meeting went on for an hour and a half and was packed full with information, including presentations given by a variety of other speakers, besides Swimmer and Eng. Caspar citizens who attended used the opportunity to directly ask Cal Fire for more transparency, to consider the economic loss of recreation that could be caused by logging, and to take carbon sequestration into bigger consideration when making their logging plans. Eng noted that all the money Cal Fire e makes from their harvests is funneled back into the forest, which allows them to maintain the forest and provide greater recreation opportunities than other public lands that rely on a fixed budget from the state’s general fund.

3 thoughts on “To log or not to log, that’s still the question — conservationists meet with Cal Fire over future of Jackson State”