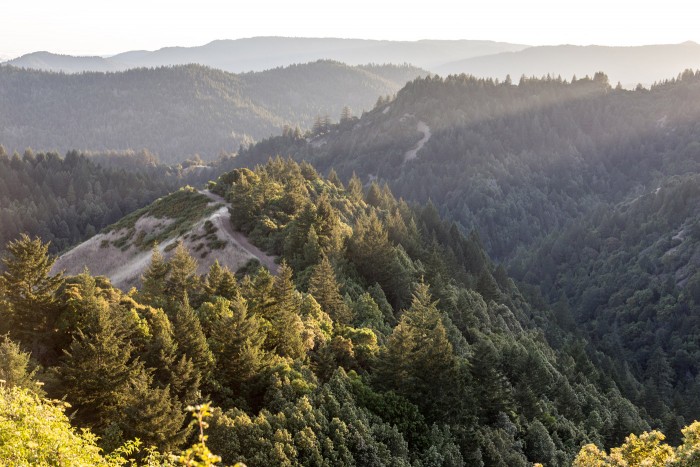 John Birchard, Save the Redwoods League

Mailliard Ranch in Anderson Valley. (John-Birchard, Save the Redwoods League)

MENDOCINO Co., 2/9/21 — The largest coast redwood forest left in private family hands is now protected from subdivision and development permanently. This morning, Save the Redwoods League announced three conservation easements that will protect an extensive redwood forest, including a 300 acre section of true old growth, on the Mailliard Ranch, a 14,838 acre property in the Anderson Valley.

A senior manager at the conservation nonprofit, which has been conserving and restoring redwood forests for over a century, explained that under the rules of the easement, around 14,000 acres of the land will continue to be a working forest, as it has been for years. This means selective harvesting of younger second growth redwood trees will be allowed to continue. Close to 1,000 acres of the land, including 300 acres of old growth redwoods and stream habitat, will be protected as a reserve and will not be logged at all.

From the mid 1800s to late 1900s, loggers managed to cut down at least 95% of redwoods that once thrived from Big Sur up to the Oregon Border. So, only a tiny fraction of the unique and historic trees, which can stretch 300 feet into the sky and live over 2500 years, are left standing.

Save the Redwoods League and other conservation groups have been working for decades to protect redwood trees, which provide habitat, shade rivers, and sequester more carbon than perhaps any other ecosystem on the planet.

The conservation group paid the Mailliard family $24.7 million for the easement, which will protect grasslands, 12,000 acres of redwood and Douglas fir forest, and 28 miles of stream habitat. Funds were contributed by Save the Redwoods donors and a variety of state and federal agencies.

The land will continue to be owned and managed by the Mailliard family. Charlotte Mailliard Shultz, 87, and a long time San Francisco society figure who helped organize this easement, was married to George Shultz, who passed away at age 100 on Sunday. Shultz served as secretary of state under President Ronald Reagan and both treasury secretary and labor secretary under President Richard Nixon. However, Charlotte came to be involved with the land through her first husband first husband, John Ward Mailliard III who died in the ’80s. Mailliard was a member of an powerful San Francisco family — his brother, William Mailliard, was the last Republican to represent San Francisco in Congress, and later served in the Nixon Administration. The ranch has been in the Mailliard family since the early 20th century.

“The Mailliard’s have managed [their ranch] very well over the years,” said Catherine Elliot, senior manager of land protection at Save the Redwoods. “What they wanted to do was make permanent the protection of the areas that are reserves and then keep their good forest management.”

Although the large majority of the land will continue to be open for logging, new rules under the easement will halve the amount of forest allowed to be logged under standard state and federal regulations.

This is the largest contiguous plot of redwood forest left in private hands. Without the Save the Redwoods easement, the land could be developed, divided, made into vineyards or small ranches, fenced off and cut apart. This would splice up habitat and diminish the ecological value of the area. The animals that call the Mailliard’s ranch home, such as mountain lions, golden eagles, and salmon don’t need just a pocket of land, they need wide ranges to hunt, breed, and roam. This easement will ensure that the connectivity of the land is maintained, noted Elliot, who explained that this is one of the reasons the conservation of the Mailliard’s land has been a priority for Save the Redwoods for years.

“One of our missions [at Save the Redwoods] is to protect all of the remaining old growth redwood,” said Elliot. Elliot has been working on this land easement since 2014 with the Mailliards, who have owned the land since 1925. “The fact that the ranch is 15,000 acres has always meant it’s a big conservation priority.”

The land was also a priority because it houses old growth redwoods, the rare few left that have never been touched by an ax.

“One of our missions of course is to protect all of the remaining old growth redwood,” said Elliot. “Sometimes it shows up in little pockets. Here there are 300 acres of old growth redwood and we wanted to make sure that was protected”

The funds to pay the Mailliard family for the easement came from a variety of donors. According to the press release:

League donors contributed $8.15 million, including a lead grant from the Hind Foundation, a leadership gift from Ralph Eschenbach and Dr. Carol Joy Provan, a $250,000 match challenge offered by Justin Faggioli and Sandra Donnell, and a $250,000 grant from Walmart’s Acres for America program through the National Fish and Wildlife Foundation. The Mailliard family made a land value donation of $6.5 million.

In addition, the League received $4.75 million in grant funding from the State of California Wildlife Conservation Board (WCB) through Proposition 84, the Safe Drinking Water, Water Quality and Supply, Flood Control, River and Coastal Protection Bond Act of 2006; $4.3 million from CAL FIRE granted by the USDA Forest Service Forest Legacy Program; and $1 million from the California Natural Resources Agency’s Environmental Enhancement and Mitigation Program, established by legislation in 1989 under the California Streets and Highways Code with funding from the Highway Users Tax Account.

Save the Redwood League

One thought on “Save the Redwoods pays $24.7 million for conservation easement in Anderson Valley — large parcel of redwood forest protected from development”