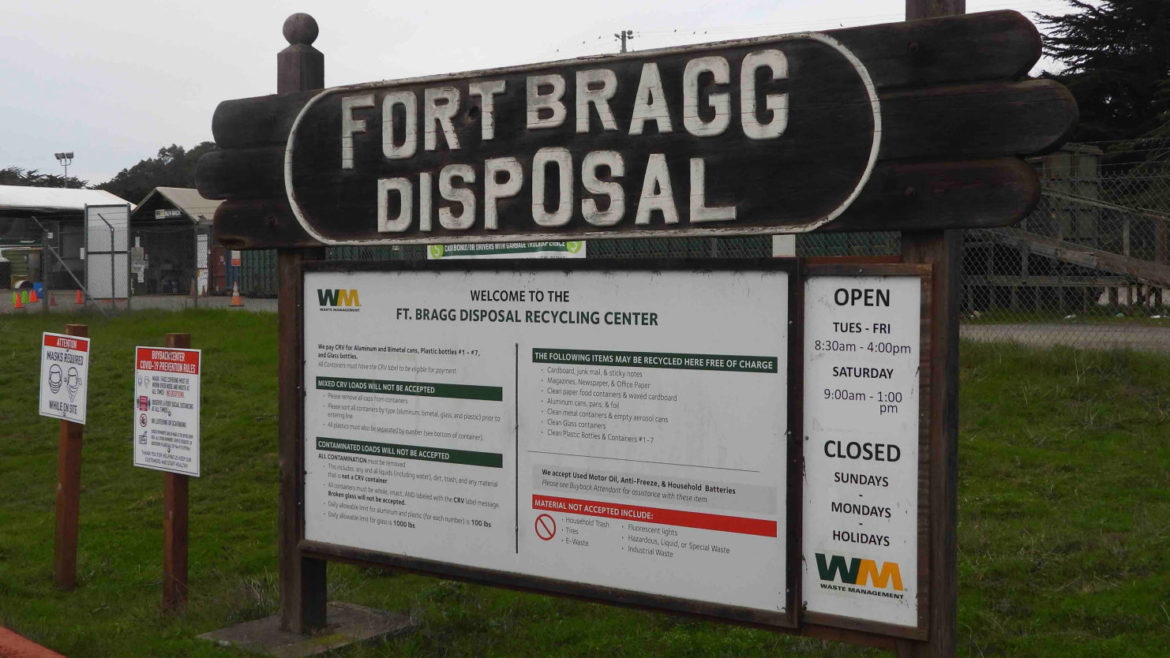 FORT BRAGG, 2/9/21 — A short-lived brouhaha over who gets to pick up Fort Bragg’s trash appears to have given the Fort Bragg City Council the upper hand moving forward with three different garbage collection companies. City residents will get no rate increases after a council vote to extend its contract with Waste Management (WM) by one year. That option had not been on the table until the city proposed a controversial quick switch to a new garbage collector.

Also discussed at the meeting were the development of a protocol for selecting a replacement city councilmember, and confirmation of a tsunami map.

“In the beginning we were in the position of not having very many choices based on what was presented to us and having very little, if any, leverage. I feel like we have gained a lot of leverage,” said Fort Bragg Mayor Bernie Norvell at Monday night’s City Council meeting.

“The benefits include no rate increase and sitting back and watching what the county does and learning from what they do. Now we are in a very good position to do what is right for the city of Fort Bragg,” Norvell said.

At a late January special meeting, the Council considered switching its garbage collection services from WM, with its facility on Pudding Creek Road, to C&S Waste Solutions of Ukiah which would have used an unidentified location south of the city.

Gibney Lane residents figured that the secret location was the former Louisiana Pacific lumber mill at the end of Gibney Lane, and though technically not constituents of the council, they vociferously challenged the council about the plan. At the same special meeting, Brad Cea of WM offered the city a one-year contract renewal with no rate increases in order to prevent the city from making the switch from C&S.

After that meeting, Solid Waste of Willits also made a pitch for the Fort Bragg garbage collection contract. No action was taken and a follow up special meeting was canceled.

So, why the whole idea to switch?

The city government had wanted a short term contract of 12-18 months after more than a decade with WM, but WM had not presented such a contract, which is what led to the proposed switch to C&S.

“Part of the challenge is that it has been in WM’s best interest to delay negotiations as long as possible in order to prevent another provider from having sufficient time to establish a local facility, purchase the trucks and other equipment necessary to establish an operation on the coast, and hire staff,” the city staff report for Monday’s meeting stated. “Six months is considered the time typically needed to make such a transition. On January 31, five months remained before the WM Agreement expired,” the staff report stated.

Monday’s meeting went forward without any more controversy. The C&S pitch was not on the agenda for action this time, only the plan to renew short term with WM.

“All along we have tried to get the best rates and the best contract we can for ratepayers. I apologize for the political uproar over the possible site location of Gibney Lane,’’ said Councilmember Lindy Peters.

“It was completely unintended by the council and the ad hoc committee,” said Peters. He said C&S found the location entirely on their own and didn’t involve the city.

“It didn’t have our blessing from the start. We didn’t know, we did not know, we just found out that people were right about that location.”

Both the city and Mendocino County trash collection contracts for the Fort Bragg area expire July 1. This dual timing was done intentionally so that the city and county could better work together to find a new transfer station on the Coast, a process which has been ongoing for a decade.

Mendocino County is in a bidding process called a “request for proposals” (RFP) to collect the trash from south of Westport to south of Albion and also for the inland unincorporated area from Potter Valley to Hopland. WM has been collecting trash from that area, plus the city of Fort Bragg. Three other companies collect the trash in the other areas of the county. The county bidding process for the other areas currently served by WM ends in March.

It is unclear why the county has not been in the same rush as the city has been. Fort Bragg City Manager Tabatha Miller said the city will benefit by observing the county pick its garbage company and taking the time to put together its own process for awarding a new contract beginning July 1, 2022. In a separate meeting last week, Solid Waste of Willits proposed to the Mendocino Coast Recreation and Parks District the idea of using a five acre parcel on SR-20. The MCRPD appointed a two-person subcommittee to study the matter.

The Council meeting lasted three hours, with the garbage matter taking up less than an hour of the meeting. Much of the meeting was dedicated to a discussion of the best way to select a new member of the city council. Nine people have applied for the open council seat. (See our previous coverage here with complete list of names)

The council hammered out a plan to choose a new member. Each of the nine will get up to five minutes to speak. A council committee composed of Peters and Tess Albin-Smith will come up with five questions to be asked of each candidate, with the candidates given a minute and a half to answer each, to be chosen in random order. There will be up to three “wildcard” questions to come from the audience or council. If all this takes too long, the council will extend the meeting from Jan. 16 to Jan. 18.