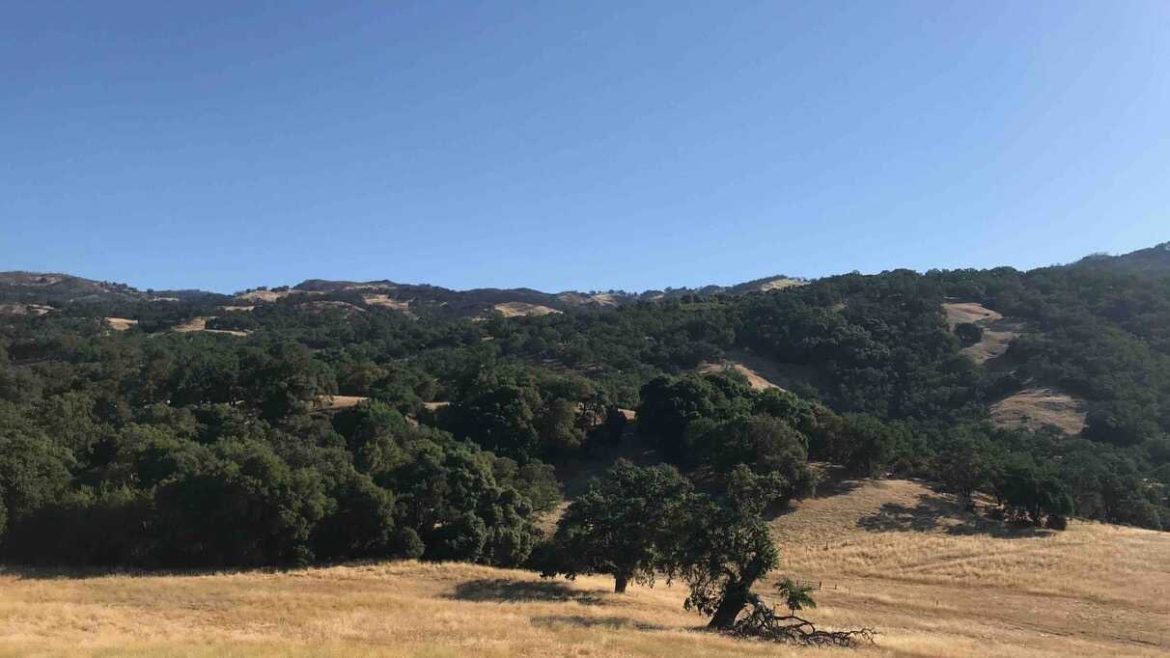 View of a ridge from University Road, Hopland

HOPLAND, 1/25/21 — Where do deer go during a wildfire? How have recent horrific fires impacted our native animals? Mendocino County has an amazing resource to help answer these questions and many more — the University of California’s Hopland Research and Extension Center (HREC).

As UC Berkeley PhD candidate Kendall Calhoun explained in a webinar put on by the center, the 5,300-acre site has become an ideal research site for several reasons. In 2016, scientists at HREC positioned cameras on a grid across the entire span of the center to track wildlife density and movement. Because the center contains several different types of landscapes, from conifer forests to oak woodland and shrubby chaparral, this tracking could determine preferred habitats and how species move between types of cover.

Then the River Fire rampaged through Hopland’s environs in the late summer and fall of 2018. The fire burned across approximately half of the center’s land. Incredibly, almost all of the 36 cameras survived the flames. “Because we had the cameras in place for two years before the fire, we had a lot of pre-data,” Calhoun explained. The data is unloaded quarterly, so a great deal of tracking had been done. Scientists could match data after the fire and get a good picture of how animals respond and adapt to a wildfire.

Calhoun began the webinar by noting that the area’s Indigenous people used fire for centuries as a stewardship tool, a practice abandoned in modern times, when the priority became stopping all wildfires.

“This has led to an increase in fuel loads and fires that are much larger and more severe,” Calhoun said. Animals and plants that had adapted over centuries to periodic burns now faced a much more difficult task, exacerbated by climate change and human encroachment on wildlands.

In order to study the changes that fire wrought, Calhoun added two tracking devices to the cameras already in place: acoustic monitors to study birdsong at dawn, and ultrasonic monitors to measure bat activity at night. Calhoun surprised his audience by noting that four nights of sampling per site netted 70,000 bat calls, which must be surveyed by software called SonoBat, since the sonic cries are too high to be heard by the human ear.

Meanwhile, the cameras continued to pick up mammal activity throughout the center. Using charts, Calhoun showed some conclusions: two years after the fires, the population density and range had almost returned for several species. Gray squirrels were the most impacted and least recovered. “The incidence of gray squirrels fell very quickly, and they have not come back,” Calhoun said.

Blacktail deer, which do not migrate, moved away from their home range during the fire, but returned quickly. The difference, however, likely because of lack of food resources and cover, was that their ranges became almost twice as large as before the fire.

Not surprisingly, the areas that experienced a high severity of fire — “almost like a moonscape,” Calhoun noted — had a lower incidence of animals than areas burned more lightly. Prey species, such as deer, no longer had cover, and predators also lacked cover from which to ambush their prey. The absence of mountain lions and bears drew in a larger number of smaller carnivores such as bobcats, skunks, and foxes.

Interestingly, coyotes had a big jump after the fire. They seemed to like the heavily burned areas, perhaps scavenging or finding it easier to locate ground-burrowing animals in the scorched ground. Skunks also increased. Mountain lions, pigs, and black bears decreased, and the fire seemed to have little effect on the numbers of bobcats, gray fox, raccoons, and jackrabbits.

Because the deer are using less burned areas because of cover, they are avoiding chaparral, which also affects the behavior of mountain lions. Although normally deer do not have a preferred habitat type, they are now choosing patches of grassland and woodland, for cover but also for the extra nutrition recovering grasses contain after a major fire sweeps through. Calhoun cautioned that the time frame is not long enough to see if deer will go back to other habitats or decrease the size of their home ranges to their past range.

Because the deer are congregating in grasslands and oak woodland areas, this puts pressure on young oak seedlings to regenerate. “It’s difficult to estimate how oak woodlands respond to wildfire because the effects take place over many years,” Calhoun said.  The researchers are seeing evidence of regeneration but Calhoun said he did not know if the little oak seedlings can escape herbivory pressures of small mammals and deer.

Where do animals go during the fire itself? Some deer at the center had been fitted with GPS collars before the fire. “The deer began moving erratically,” Calhoun said. One individual left the center entirely, but the others seemed to move back and forth, as if moving away from physical flames.

“They try not to leave their home range,” he said, noting that even that one absconding deer returned quickly. “The small animals are not able to move as well. Moles, for example, cannot escape a fire. Birds can escape. There hasn’t been much work done with smaller animals.”

A lot of research — and rethinking about management techniques that benefit plants and animals — lies ahead, especially as climate change accelerates drought and high temperatures. That work is imperative if we are to maintain biodiversity. The web of life depends upon the interactions of every species, and it’s been demonstrated too often that disturbances have vast and unintended impacts. Because of the work at the Hopland Center, county residents have a head start on understanding those relationships.

One thought on “Talk at Hopland Extension examines wildlife recovery after fires, and tries to answer the question, “where do deer go during fires?””