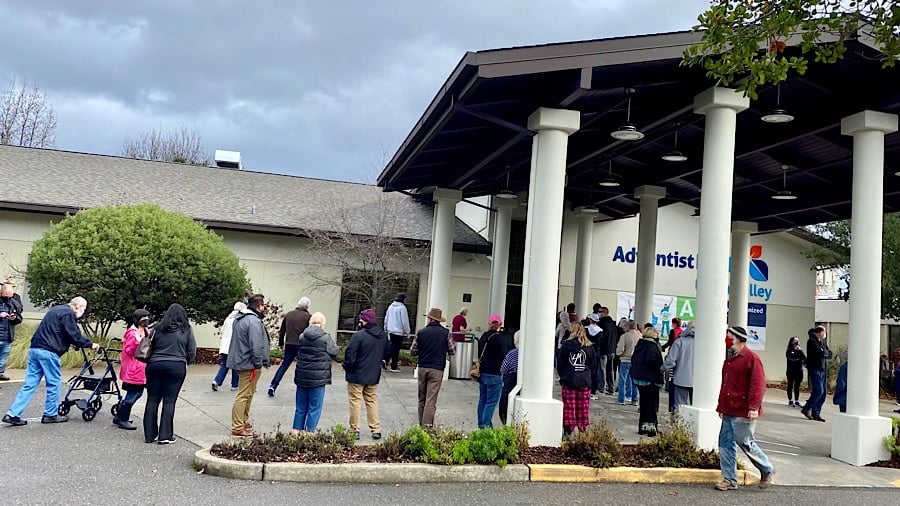 MENDOCINO Co., 1/4/21 — A power failure for the freezer holding the county’s ration of the Moderna vaccines forced an emergency distribution of 850 doses of that vaccine this afternoon in Ukiah. Nursing home workers, clinicians, and the general public on the first-come-first-serve basis were given an initial dose of the vaccine, and will be contacted by the hospital to get a second dose in about a month.

The doses had been stored at Adventist Health Ukiah Valley Medical Center in a special freezer. As explained by Dr. Bessant Parker, chief medical officer for Adventist Health in Mendocino County, at about 11:35 a.m. this morning it was discovered that the freezer’s power had died some time earlier, and that an alarm meant to alert hospital staff of such a failure had not gone off. As a result the vaccine had begun to thaw or was in danger of thawing.

Doctors immediately realized that it would be necessary to distribute all these 850 doses on an emergency basis, lest they go bad and become unviable. So the staff of the hospital began to make calls, send texts, call in staff that was off, and prepared to administer all the doses.

They began at 12 p.m. and a line soon formed outside and inside of the Ukiah Valley Medical Center, with people off the street, patients, people who had heard from a friend or word-of-mouth, lining up out the door. By 2 p.m. all the doses had been administered and the people left in line had to be turned away. Information was collected from those who did get a vaccine, and they will be given a call at a future date for their booster shot. Additionally they received CDC vaccine cards.

Given the narrow window to get the vaccines out, time was of the essence, and Parker explained that vaccines were distributed only in Ukiah, at the hospital and at certain key nursing homes. Sending doses up to Howard Memorial Hospital was considered, but was not possible due to an accident on the 101 blocking northbound traffic.