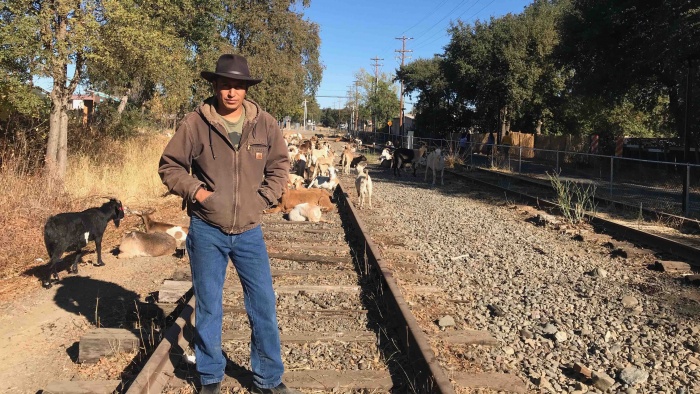 MENDOCINO Co., 10/30/2020 — One bite at a time, a team of 200 goats are working to clear brush and prevent fires along the Ukiah section of the Great Redwood Trail, which runs from Brush street to East Gobbi street.

Early Wednesday morning, Tony Gonzalez stood next to his white truck, wearing a brown, wide brim wool hat with a few small feathers tucked in the brim, a brown Carhartt jacket, jeans, and sneakers. Where he stood, squinting into the sun, wasn’t far from his 200 goats which napped, munched, and snuggled with each other along the railroad tracks in the center of Ukiah.

Gonzalez and his goats were hired by the City of Ukiah to manage the land along the train tracks next to the Great Redwood Trail by removing invasive species, such as starthistle, and highly flammable material. Invasive species starthistle chokes out native species, is poisonous to some animals, and has infiltrated over 15 million acres in California.

The City manages that land for fire hazard every year, but this was the first time they used goats.

Usually the city commissions inmate crews from Chamberlain Creek Camp, a prison near Fort Bragg, to do the work. According to the California Department of Corrections and Rehabilitation, “The camp’s primary mission is to provide fire crews for fire suppression. Additionally, the inmates provide a workforce for conservation and community service projects in the local area.”

Due to both COVID and the massive number of severe wildfires statewide, that option was unavailable. So instead, they hired Gonzalez and his team.

A University of California Agriculture and Natural Resources Division study claims that there is a direct correlation between the amount of fuel present and the severity of fires. Removing easily combustible “ladder fuels”, like the ones that grow along the train tracks, can help reduce the risk of wildfire because the fuels, which catch quickly and burn hot, can carry fire up to larger vegetation. This process is similar to how lighting newspapers and kindling can help ignite larger logs when building a fire.

This is important for the entire state of California, where over four million acres have burned so far this year, but possibly even more so for Ukiah, which not only faces the risks of climate change and drought induced wildfire, but has dealt with multiple instances of arson over the course of the summer.

Tony Gonzalez runs a pretty big land management business all by himself, which he named Gonzalez Brush Busters. He works eight months out of the year taking his goats around northern California to eat down fuel that landowners want to get rid of. The other four months he settles in Lake County, where he cares for his goats, with special attention to the mothers giving birth and the baby goats. Years ago, he used to sell some of his goats for meat. But not anymore. Now, he refers to his goats as babies, names most of them, has favorites, and talks about their different personalities.

Using goats for fire and fuel management, as Gonzalez does, is called targeted grazing. It can be used as an alternative to herbicides, prescribed burn, and mowers to remove invasive species and easily combustible brush. In the case of the great redwood trail, the abandoned train tracks make it difficult to mow low to the ground and pull brush from the root, it is too urban to be managed with prescribed fire, and in the past, residents of Ukiah have expressed their concern over the use of pesticides.

“Targeted grazing is really a specialized form of grazing that targets specific types of vegetation for specific landscape and land management goals,” said Dan Macon, who is the UC Agriculture and Natural Resources livestock and natural resources advisor for Placer, Nevada, Sutter, and Yuba counties. “Of all the vegetation management tools we have really only targeted grazing and prescribed fire actually remove vegetation. All the other vegetation management techniques whether it’s mechanical treatment or herbicide treatment leave the material on site.” The vegetation not only gets taken off site, it also is used by the goats. Although it is not always the most nutritious, and often has to be supplemented by the herder with heartier grains, it still gets fully processed and turned into muscle and milk, rather than being left out to dry in the sun.

According to Gonzalez and Macon, targeted grazing is growing in popularity. “I used to get about 10 to 15 calls a week, now it’s around 80 to 120,” said Gonzalez. Macon has also seen a spike in interest, with more people reaching out to him about the topic. In 2018, the Sierra Club published an article titled “Demand for Grazing Goats is Growing like Wildfire.”

As the sun rose high in the sky and the day heated up, the goats roamed along the tracks, fenced off in a large pen, around three blocks long and 30 feet wide. One baby goat, named Sylvia, was particularly friendly, happily accepting ear scratches, snacking on the frays hanging off my jeans, and even checking out my car keys to see if they were edible.

The goats are confined to one section at a time, so that they eat everything in the area, and eat it all the way down to the root, not just the grasses that are more appealing to them, before they move on.

The difference between where the goats had grazed and where they had not was striking. Areas that the goats had already feasted on were bare almost to the bone, with only gravel and a few dead leaves, naked branches, and larger trees left behind. Where the goats hadn’t been, full bushes, baby oak trees, and golden-brown grass sat densely packed, sometimes a few feet tall, high up past the rims of the railroad track. It was easy to see how these ladder fuels could ignite in the blink of an eye.

The Ukiah public works department also hired Gonzalez and his goats to help out with a few other city projects. Their fantastic ability to eat an acre to acre and a half, or 800 pounds of brush an hour and destroy even the thorny starthistle, a pervasive invasive species, will be applied to a total of around 400 acres around the city.

“Somebody mentioned the goats that were working on Highway 101 and they said, ‘well can’t Ukiah get some goats?’ And I said heck yes Ukiah can get some goats,” recounted Mulheren over the phone. Mulheren found Gonzalez and recommended him as an option to public works, which quickly jumped on board.

So far, it’s been a slam-dunk. Mulheren, Gonzalez, and Jared Thiele, management analyst for the public works and water resources department for the city of Ukiah, all said they have gotten almost entirely positive feedback on the project, except for a few concerns about price. The price came out to 70,000 dollars for 400 acres. There were also some complaints about barking dogs.

After public works found the contractor they wanted, they brought the project idea before the City Council.

“Everybody was really excited about it. Everybody was just excited to see something different happen. We got quite a bit of support from the public. There’s been a lot of people down here to check it out, they’ve been very interested in it.

As the day went on, more and more people started strolling down the Great Redwood Trail to visit the goats, asking Gonzalez questions, taking pictures, and even petting them when Gonzalez brought them over to the fence.

Thiele said that this is definitely something they are interested in doing again next year. “The biggest benefit to having the goats is the starthistle. That’s a big problem, but the goats will go in and eat the seeds so it won’t reseed itself. So in a couple of years of maintenance with the goats it will completely eradicate it, and they also help promote the growth of the natural species.”

Importantly, if you’re interested in meeting the goats in person, you can find Gonzalez around 12 p.m. or 5 p.m. along the Great Redwood Trail, when he takes the baby goats out for kids to play with!