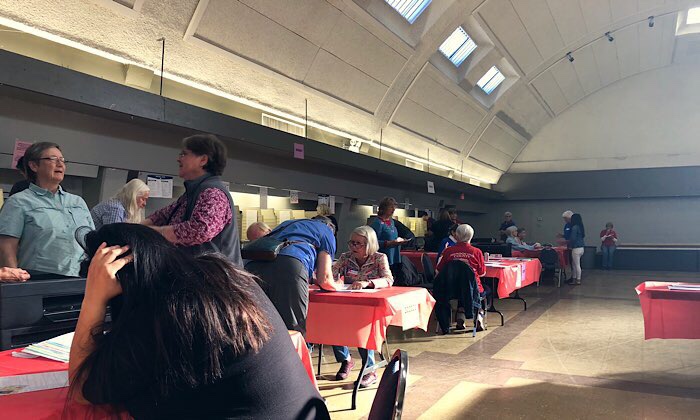 Voting of yesterday. People vote in person at the Willits Community Center, in a pre-COVID world, in the 2018 general election. (A.F. Baumann / The Mendocino Voice)

MENDOCINO Co., 11/3/20 — It’s finally Election Day today, but for many reasons it’s not a normal election day. COVID has forced various changes to our normal voting habits, which we are laying out here. Most obviously, polling stations will be enforcing a variety of COVID precautions, including a mask requirement (read more about that here). People have been encouraged to vote by mail, and every registered voter should have received a mail-in ballot. Already 59% of registered voters have voted and had their ballots collected by the Mendocino County Election Division.

(You can find the locations for all the polling places and drop-boxes.)

The biggest change in terms of Election Day voting is that most people will not be handed a ballot at the polling location. As a COVID safety measure every registered voter in California should have received a mail-in ballot. Now, if a voter desires to have that ol’ polling place experience they may bring their mail-in ballot, and the envelope, and fill it out in the booth. If it’s already filled out they can drop it off at the polling station. This goes for both usual vote-by-mail (absentee) voters, and voters who usually vote at the polls.

If a voter does not have their vote-by-mail ballot, ether because they did not receive it or lost it, they will be asked to fill out a provisional ballot (which goes in a pink envelope). This is a precaution to ensure that voters do not cast two ballots. During the vote count over the next couple weeks election workers create a list of every mail-in ballot cast, and then begin to tally the provisional ballots, checking all the while that they are not duplicates from a voter who has already cast a vote.

Californians who are eligible to vote, but are not registered, may register today, Election Day, at a polling location and cast a provisional ballot — this is called conditional voter registration and has been law for a few years. These ballots will be counted once the registration is processed.

In California convicted felons regain their voting rights once their parole is completed, and may vote in this election.

As the Mendocino County Assessor-Clerk-Recorder Katrina Bartolomie explained in a press release:

By Executive Order of the Governor of California, EVERY “active” registered voter in Mendocino County was sent a Mail In (aka Vote By Mail or Absentee) Ballot. Because of this, in this election – if a “normal poll voter” (where the voter traditionally went to a polling place to vote, was listed in the roster, and normally only had to sign their name to vote) goes to a polling location to vote, like they have in past elections – the voter will have to vote a “Provisional Ballot” and put their voted ballot into a Pink Provisional Envelope – unless they take the ballot AND envelope they received in the mail with them to surrender. This will also apply to a vote by mail voter, they will also have to vote a Provisional Ballot. Again, this is because everyone was sent a mail in ballot.

However, due to COVID some polling places proved too small for occupancy limits and safety. If you previously polled at one of the following places, your polling location has been moved:

As of October 19, 2020 there were 53,697 people registered to vote in Mendocino County. In this short section we breakdown what exactly that means.

A felony conviction does not prohibit a person from voting in California, however, people on parole are not allowed to vote until they have completed said parole, at which time their voting rights are restored.

The census does not currently ask questions of citizenship or keep a count of citizens — citizenship being a requirement for voting in most U.S. elections (though it historically was not in many states). According to the Census, 13% of the residents of Mendocino County are foreign born, or 12,277 people. Of those an unknown number are children (ineligible to vote anyway) and an unknown number are naturalized adults (now eligible to vote).

In its Report of Registration for October 19, 2020 the California Secretary of State’s office estimated the total number of eligible voters in Mendocino County (citizens over 18-years-of-age, not currently in state or federal prison or on parole for felony crimes) at 63,021 people, or 92% of adults. As of Oct. 19, 2020 there were 53,697 people registered to vote in the County of Mendocino, or 85.2% of eligible voters, and 78.45% of adults.

The following are registration numbers are from the California Secretary of State’s Reporter of Registration for October 19, 2020 for Mendocino County: