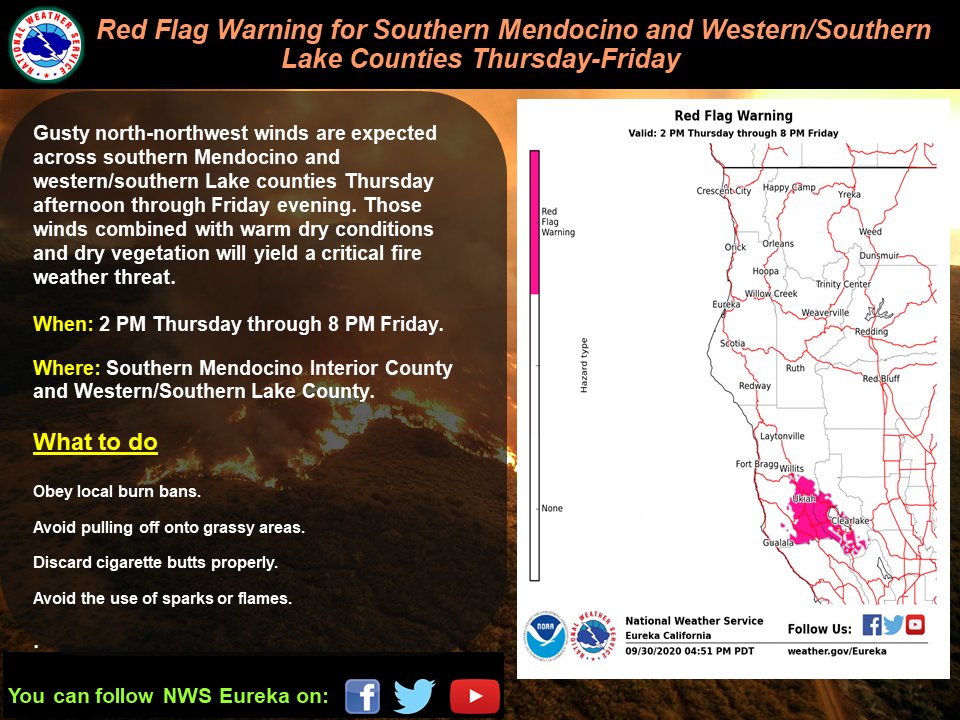 MENDOCINO Co., 10/1/20 — The National Weather Service has issued a red flag warning for a large swath of Northern California including much of interior southern Mendocino County, the western portion of Lake County, and much of Sonoma and Napa counties. Unfortunately, the warning covers much of the area of Sonoma and Napa currently afflicted by the Glass Fire and increased fire activity is expected there. However, while a north wind blowing through the enormous region of the August Complex (now nearly at 1 million acres) will likely continue to push smoke into the valleys of Mendocino, most of the August Complex is not under a red flag warning, and the risk of dangerous fire behavior there is lower.

The California Independent System Operator has also issued a “flex alert” for Thursday afternoon, in anticipation of rising temperatures and increased residential energy use, requesting customers minimize electrical use to reduce strain on the statewide grid.

The red flag warning for the North Coast is in effect from today, Thursday at 2 p.m. until Friday at 8 p.m., which means that high temperatures, low humidity, and winds could lead to high fire risks, and increased activity on existing fires. Specific details for red flag alerts across the state can be found at the NWS website.

Days of low wind and stagnant air The decrease in air quality across Northern California may depress the predicted high temperatures, according to NWS, but decreased visibility over the last several days has also created challenges for fire crews conducting aerial attacks.

Here is the notice of the “flex alert” from Cal ISO, which is the nonprofit independent system operator, which manages California’s electrical gird and makes the declarations of the flex alert.

FOLSOM, Calif. – The California Independent System Operator (ISO) has issued a  statewide Flex Alert, a call for voluntary electricity conservation, from 3 p.m. to 10 p.m.  today, to prepare for possible energy shortages due to an unusually warm beginning of October.

With high temperatures in the forecast today and tomorrow, the power grid operator is  predicting a dramatic rise in electricity demand, primarily from air conditioning use. Power grid operators have been preparing for the hot weather for several days by  getting commitments from all available resources.

One of the most important ways the public can help is “pre-cooling” homes and  buildings in the morning and early afternoon prior to 3 p.m., and then setting  thermostats higher until 10 p.m.

The state’s program for lining up enough energy to serve demand is based on historical  weather conditions, which are typically cooling down this time of year. However, the  current autumn spike in temperatures – as much as 15-20 degrees above normal – means the grid doesn’t have as much energy available as summer months, when high  demand is expected.

In addition to a forecasted capacity shortfall, wildfires are threatening transmission lines across the state, and in fact, generators that were taken offline several weeks ago due  to fire have not returned to service. Smoke from wildfires is adding forecast uncertainty,  and has the potential to reduce solar power production as the weather pattern changes  over the coming days.

Under these circumstances, consumer conservation is needed to absorb any additional  unexpected outages on the system. Flex Alert participation today can buffer against  reliability concerns and power interruptions.

The ISO was made aware of a projected gap in supply in the day-ahead market  yesterday. All available resources were committed to serve load, and steps were taken  to bring all resources on line, and to increase flow of imports to the system.

The ISO issued a Grid Alert yesterday to warn of a possible electricity shortage in the  day-ahead market, for one hour beginning at 6 p.m. today. A Restricted Maintenance  Operations (RMO) notice was also issued for the period of 6 a.m. to 10 p.m. today. The  Grid Alert allows operators to access demand response supply, and the RMO allows  operators to call all available generation onto the system and bring back transmission  that may be offline for planned maintenance.

Consumers are urged to conserve electricity, especially during the late afternoon and  early evening, when the grid is most stressed due to higher demand and solar energy  production falling.

Energy use reduction during a Flex Alert can prevent further emergency measures,  including rotating power outages.

∙ Use fans when possible.

Consumers can also take steps to prepare for the Flex Alert by doing the following  before 3 p.m.:

∙ Run dishwashers, washing machines and other major appliances. ∙ Set pool pumps to run in the early morning or late at night.

While the heat is forecasted to extend into tomorrow and possibly the weekend, no  further Flex Alerts have been scheduled at this time. The ISO is closely monitoring  supplies, weather and fire activity.

For information on Flex Alerts, to get more electricity conservation tips, and to sign up  for conservation alerts, visit the ISO’s Flex Alert website. Visit the ISO’s News page for  more information on the heat wave’s impacts on grid operations, and to learn more  about alerts, warnings and emergency notices. For updates on grid operations, follow us on Twitter at @California_ISO or @FlexAlert,  and monitor system conditions in real time at ISO’s Today’s Outlook.