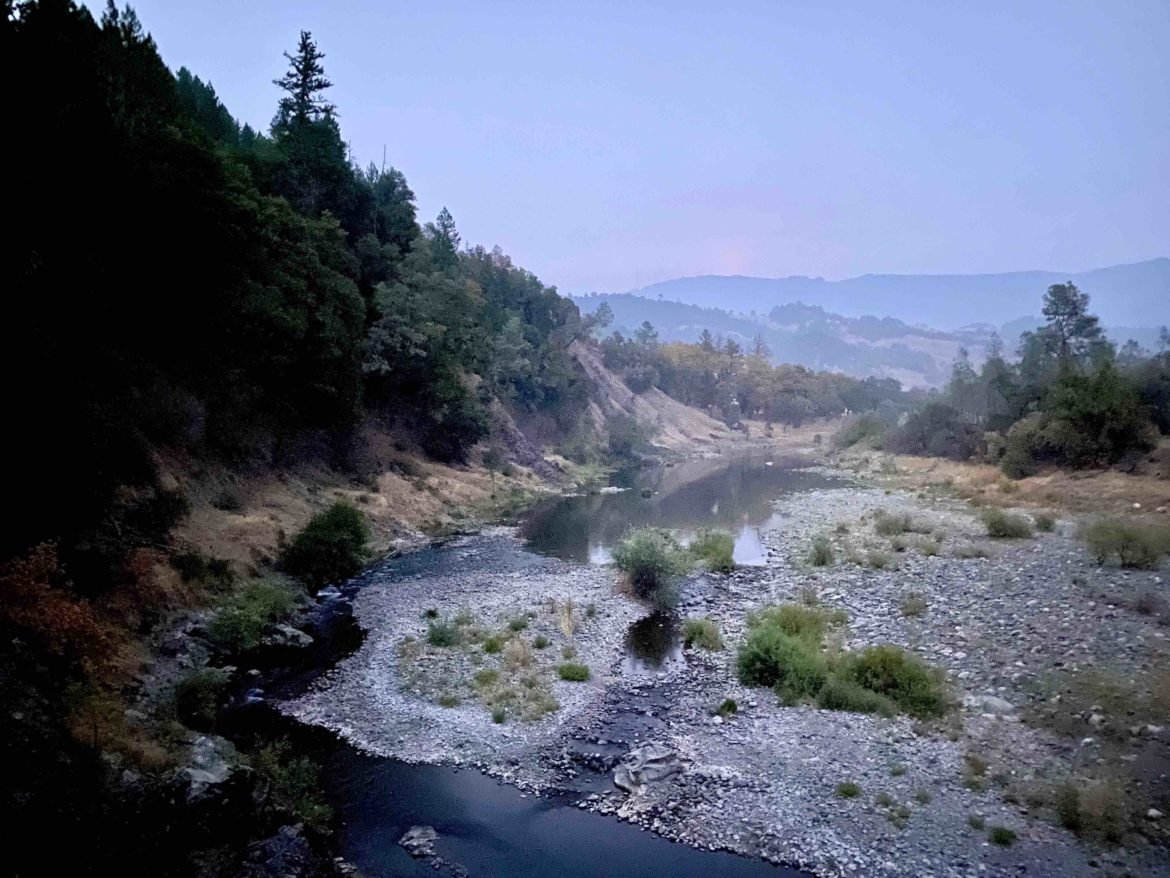 Patrick Higgins, managing director of the Eel River Recovery Project, a Laytonville based organization, has been surveying the river for nine years. On his latest trip, streams he went to included Outlet Creek, Ten Mile Creek, and the Upper South Fork Eel. What he found was distressing.

The Eel River, which has the third largest watershed in the state, supports salmon and trout fisheries. By some estimates, it is the most important producer of coho salmon in the state. It also provides both water and power to communities from Marin County to Fortuna.

While surveying the river, Higgins saw many sections of creek near Willits that typically serve as fish habitats completely dried up, including upper sections of Baechtal Creek, which is a tributary of Outlet Creek.

Other areas were in slightly better condition. For example, Ten Mile Creek, near Laytonville, retained some pools of cold water, which were serving as fish habitats.

“I was able to find different reaches of creeks and even a section of the main Ten Mile Creek that had steelhead,” recalled Higgins. “But it’s far fewer than last year and also much more extensive reaches of completely dry and fishless creek in Ten Mile too.”

Furthermore, the South Fork Eel River, which Ten Mile flows into, is experiencing its lowest flows on record, said Higgins. The record goes back 81 years.

“The Eel River, especially the sections in Mendocino County, is experiencing severe drought,” said Higgins, noting the historically dry February in 2019. “It’s reading out ecologically on the fish resources of the Eel River.”

Droughts are a natural part of the environment in California and many native species have evolved to deal with extensive dry periods. However, UC Davis Scientist Andrew Ryple, who studies coldwater fish ecology, explained that due to climate change, droughts are getting harsher, which is taking a toll on fish species.

“It’s a normal thing for there to be droughts, and then of course wet years,” said Ryple over the phone.

Over many years, fish species have adapted to be able to handle drought years, and persist despite those challenging conditions. “But, what we’re seeing is an increase in the extent of those droughts, how long they go, how intense they are and that can cause problems for fish,” explained Ryple.

Even though some cold water fish species such as Chinook salmon, Coho salmon, and Steelhead Trout, have developed to survive through droughts, they still do better in wet years.

Using salmon as an example, Ryple explained that juvenile fish are much more likely to make it out to sea, where they go to spend their adult lives before coming back to the river to spawn, during years with more precipitation.

Under the Endangered Species Act, coho, chinook, and steelhead are all listed as either threatened or endangered along different stretches of the California coast.

Due to the especially dry year, Higgins anticipated that river conditions would be less than ideal, but in some areas, it was even worse than he had imagined.

“I was expecting some pretty harsh conditions in creeks around Willits, but when I saw upper Beachetal [which is a tributary to Ten Mile] dry I really was floored,” said Higgins. “Even in years when it was barely flowing between pools the pools were cold and there were trout. This is another phase of desiccation of the water bodies in Outlet and a real sign of ecological breakdown,” he added.

Although most of what Higgins saw out in the field wasn’t pretty, there were a few spots that were flourishing, little stretches of river that gave Higgins hope.

At Dutch Charlie Creek, which flows into the South Fork Eel River, the water was still flowing and was so cold that Higgins had to put on his wetsuit to venture into it. And when he did start exploring, he found coho salmon. “So that was a little miracle on the high side, to see coho, which are rare, and to see them in abundance,” said Higgins. “I was so revived by it,” he added, the excitement in his voice growing. “The Eel River is a huge system and it has tremendous ecological resilience. Every time I see something that profoundly disturbs me on the downside I see something that inspires me because of the resilience of the system.”

That experience gave Higgins hope for the future of the Eel. Like Higgins, Ryple sees a light at the end of the tunnel for Northern California rivers and fish species such as Chinook, Steelhead and Coho that live in this region.

He explained that if these fish species have access to cold water and the ocean, they will probably be okay. “Climate models suggest that things will get tougher but we will probably still have enough cold water to support these fisheries,” he said. Knowing that, there really is a path to saving these fish species and populations. It’s just a matter of whether we have the will to do it.”