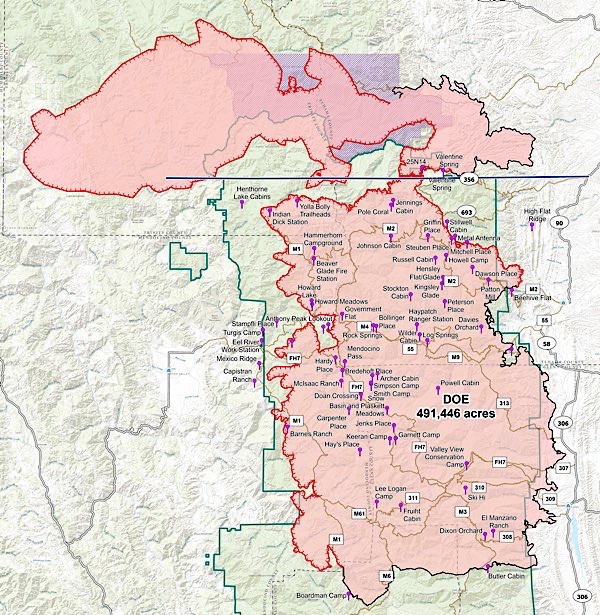 UPDATE 7:05 p.m. — The mandatory evacuation area has been expanded somewhat to the northeast of Covelo, and the Mendocino County Sheriff’s Office has confirmed that this expansion was made due to increased fire activity near that area. The area, called “zone N” on the evacuation map, was previously under an evacuation warning.

The scale of the August complex, which has now been broken into three zones, but is considered one cohesive fire, is almost unfathomable, especially given that it’s still growing. At a special meeting of the Mendocino County Board of Supervisors, at which the board approved a disaster deceleration for the county, Cal Fire Mendocino Unit Chief George Gonzalez noted that the fire is now about 755,000 acres in size, and that the fire uncontained fire front along the western edge of the fire, which is slowly moving towards more populated areas of Mendocino County, is 100 miles long. Gonzalez noted that this is longest fire front that Cal Fire has ever faced, but he was confident that the state’s fire fighting agency would stop the fire before it reached the towns of Covelo, or even Willits.

The northern and eastern stretches of the fire remain handled by federal agencies under the auspices of the USFS but with assistance through FEMA, while the western edge of the fire is now the jurisdiction of Cal Fire as the blaze makes its way down into the state responsibility area.

Evacuations of the Black Butte Campground along Mendocino Pass Rd. are underway as of time of publication.

The area directly north of Covelo is under an evacuation warning. Additionally, there is a huge swath of the county from the county line along the eastern bank of the Eel all the way to the fire that is under mandatory evacuation.

Areas north of Potter Valley and in the Van Arsdale area remain under an evacuation warning.

An evacuation map from the Mendocino Sheriff’s Office is available here.

Although the August Complex North Zone has yet to cross the Eel River in its northern area, or move into Humboldt County, evacuation orders for that county remain in effect for regions south of Highway 36 in Bridgeville and all communities along Alderpoint Road down to the Mendocino-Trinity County line.

Evacuation warnings are still in place for all areas west of Bell Springs Road to the 101 from Elk Creek Road / Dyerville Loop Road to the Mendocino-Trinity County Line in southern Humboldt.

You can find a map of the evacuation zones here.

The Humboldt County Fairgrounds are open for evacuees.

That team will manage the southern area of the original complex, which is mostly taken up by the Doe Fire. The August Complex South Zone is now 491,466 acres and burning in five counties including Glenn County, Mendocino County, Lake County, Tehama County and Trinity County. The fire is 25 percent contained.

Firefighters are continuing to assess the damage the complex did earlier on in the week. “Right now we’re trying to focus on the northern area that is pushing towards the coast,” said August Complex public information officer Kimberly Kaschalk. “Trying to figure out what the fire has done and how we can box it in.”

There are 17 hand crews, 69 engines, 22 dozers, 41 water tenders and 9 helicopters fighting the fire. According to this morning’s press release from the U.S. Forest Service, there are also 233 soldiers from the 14th Brigade Engineer Battalion working on the fire. It is unclear whether or not the firefighting soldiers are included in the overall crew numbers.

Assessing how and where the fire moved during this week’s monster wind event is difficult and complicated work. Conditions are still dangerous, with the potential threat of falling trees and erratic fire conditions still at play. “They’re [the incident management team is] trying to make sure it’s safe so they can get people back out there,” said Kaschalk, who said she thinks there are some crews starting to go back to work, after having to back off due to the dangerous wind and fire conditions earlier this week.

The fires that were formerly part of the August Complex’s northern region — Elkhorn, Hopkins, Willow, and Vinegar Peak — will now all be managed by California Interagency Incident Management Team 5. The team currently has 327 assigned personnel split into six hand crews. They also have 17 engines, nine dozers, one helicopter, and seven water tenders.

Right now firefighters are focusing their attention on the east side of the Eel River, where the fire is holding right near the Trinity-Humboldt county line. Firefighters are preparing to catch the fire on the west side if it jumps and working on structure protection in that area.

Significant smoke shading the area, increasing relative humidity and light winds are helping the firefighters in both complexes gain control. However, with southeasterly six to nine mile per hour prevailing winds pushing the fire to the northeast, the fire continues to spread towards the coast.

Unhealthy air quality will stick around Mendocino County again today, with unhealthy and hazardous conditions present in most areas. You can find more information about air quality where you live on Purple Air or AirNow.