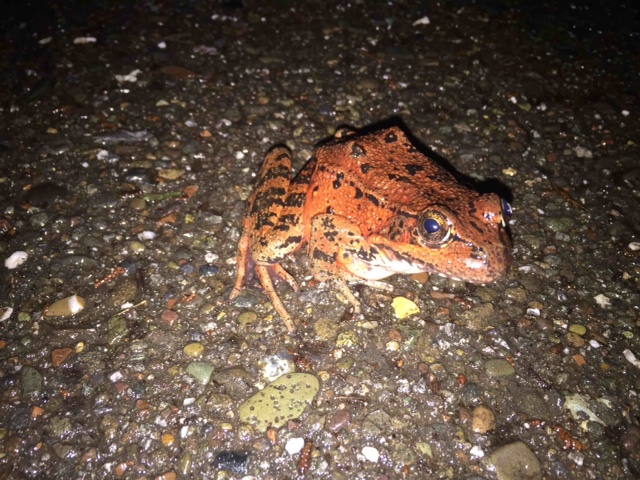 MENDOCINO Co., 8/1/20 — Friends of Gualala River, a local nonprofit, plans to move their five-year conflict over logging in the Gualala River floodplain from Sonoma County Superior Court to federal court. The local conservation group is teaming up with the Center for Biological Diversity, a nonprofit dedicated to fighting threats to biodiversity worldwide, to try and to stop Gualala Redwood Timber’s Dogwood Timber Harvest Plan, in the Gualala River watershed. On July 8, the two nonprofits jointly filed a notice of intent to sue both Gualala Redwood Timber, which is owned by Redwood Empire Sawmill, and the California Department of Forestry and Fire Protection (Cal Fire) in federal court for alleged violations of the Endangered Species Act.

The conservation groups believe that the logging operation — which the timer company says would harvest mostly mature redwoods of 90 to 100 years old — and could substantially harm the Gualala River Watershed population of five federally listed endangered species. The two nonprofits want Gualala Redwood Timber to apply for a special permit, called an “incidental take permit,” designated for projects that may harm a listed species in any way (including significant habitat modification) before moving forward with their timber harvest plan. However, Gualala Redwood and Cal Fire say that the Dogwood Timber Harvest Plan has been adequately vetted to ensure that it will not result in the illegal take of any endangered species. Gualala Redwood also noted that they already follow United States Fish and Wildlife regulations put in place to protect the creatures on the federal endangered species list.

Now that Friends of Gualala River and the Center for Biological Diversity have officially filed their intent to sue, there is a 60 day ticking clock, which started on July 8, during which time, the parties can negotiate. The conservations say that if a deal isn’t brokered by September 6, they will sue in federal court. Ultimately, Friends of Gualala River and the Center hope that Gualala Redwood Timber will leave the forest around the Gualala alone.

When applying for an incidental take permit, the applicant must provide a conservation plan that minimizes harm to the listed species and secure funding to implement it.

Opponents to the Dogwood Timber Harvest Plan say the Gualala River floodplains have been decimated by decades of logging. Nevertheless, Peter Galvin, Center for Biological Diversity program director and co-founder, maintains that they are also extremely resilient. He said that the ecosystem is starting to “recover,” and that more logging would stymie that process.

But some disagree with that view. Forest manager John Bennet, who has been working for Gualala Redwood Timber for almost 30 years, says the Dogwood Timber Harvest Plan would use sustainable methods. “We do have a standing inventory on the property and a sustained yield is determined off that inventory. Every year we’re growing more than we’re logging,” said Bennet over the phone.

In 2015, Gualala Redwood Timber, which owns and manages the land, submitted their Dogwood Timber Harvest Plan to the California Department of Forestry. The Department of Forestry and Fire Protection, or Cal Fire, in its role as the department of forestry manages timber production in California, and “are dedicated to the fire protection and stewardship of over 31 million acres of California’s privately-owned wildlands,” including the state’s timber harvesting programs.

The men and women of the California Department of Forestry and Fire Protection (CAL FIRE) are dedicated to the fire protection and stewardship of over 31 million acres of California’s privately-owned wildlands.

During the comment period, Friends of Gualala River sent opposition letters to Cal Fire. Subsequently, an injunction from a Sonoma County Superior court halted the operation. This process repeated from 2015 until 2018.

However, in 2019, things went differently.

A new Sonoma County Superior Court judge granted a permit to Gualala Redwood Timber to move forward with their timber harvest plan on the 30,000 acre holding in the Gualala River floodplain.

“Every year we saw that Cal Fire was not appropriately evaluating these timber harvest plans which are smack dab in the middle of a floodplain,” said Charlie Ivor, president of Friends of Gualala River.

Believing they had a big fight ahead of them, they called for backup. Friends of Gualala River reached out to the Center for Biological Diversity to join them in filing a federal Endangered Species Act lawsuit.

On July 8, the two organizations officially filed their intent to sue due to the alleged unlawful “take,” or harm, of steelhead trout, coho salmon, California red-legged frog, marbled murrelet (a type of sea bird), and northern spotted owl from the activities of the logging plan, which would harvest mostly mature, 90 to 100-year-old redwood trees.

“Take” is a broad term used in the Endangered Species Act of 1973, which encompasses any way in which a person could harm or kill a listed species, including “harass, harm, pursue, hunt, shoot, wound, kill, trap, capture, or collect, or to attempt to engage in any such conduct.”

According to the United States Fish and Wildlife Service (USFWS), part of the Department of the Interior, when the taking of species is likely, the entity that may harm the species must apply for an incidental take permit, in which the applicant must provide a conservation plan that minimizes harm to the listed species and secure funding to implement it.

However, it is solely the non-federal parties’ responsibility to determine whether or not they should apply for the permit. In an April 2018 memorandum, the USFWS principal deputy director explained to Fish and Wildlife staff that it is not suitable to tell a non-federal party that they must apply for a take permit. Writing that, “It is also vital that Service staff recognize that whether to apply for a section of 10(a)(1)(B) permit is a decision of the applicant. Service staff can and should advise non-federal parties on the law, our regulations and guidance, and the potential for take of listed species incidental to their activities, but it is not appropriate to use mandatory language (e.g., a permit is “required”) in the course of that communication.”

“The fact that they’re moving forward without a take permit is egregious,” said Peter Galvin, director of programs and co-founder of the Center for Biological Diversity.

But forester John Bennet thinks that they have already done enough to adequately protect the listed species and their habitat. “We don’t think that there is a need for an incidental take permit,” he said.

Bennet explained that since Gualala Redwood Timber already follows guidelines from the Fish and Wildlife Service regarding the species, going the extra step of applying for an incidental take permit isn’t necessary.

Bennet says the company already complies with rules such as not operating within 500 feet of spotted owl nests, making sure their skid trails have the least possible impact, and avoiding areas within 30 feet of water channels. “We already follow forest practice rules and guidelines from the Fish and Wildlife Service regarding the spotted owls, red legged frogs, marbled murrelets, fish species,” said Bennet.

He added that “the incidental take permit would be through the U.S. Fish and Wildlife service and the way they define harm is that harm in the definition of ‘take’ in the act means an act that actually kills or injures wildlife. Such an act may include significant habitat modification or degradation where it actually kills or injures wildlife by significantly impairing essential behavior patterns such as breeding, feeding or sheltering.”

Even so, Galvin thinks that the Fish and Wildlife guidelines without an additional take permit will not protect the endangered species in the delicate ecosystem, saying, “The Gualala River is making somewhat of a comeback through habitat restoration projects. This [timber harvest project] would remove essential shading and canopy of the river, increasing temperatures, setting back the river recovery and really dealing a setback to a fragile ecosystem that has been hammered over the decades but is showing some recovery,” he said.

“People are trying to put the pieces together and this would be a step in the wrong direction. It’s our hope that the project is modified to avoid impacts to endangered species.”

But Cal Fire sides with Bennet and Gualala Redwood. Eric Huff, program staff chief for the Headquarters Forest Practice Program, wrote via email that, “…the Dogwood THP [timber harvest plan] underwent a thorough interdisciplinary review led by CAL FIRE[sic] Forest Practice staff with representatives of the North Coast Regional Water Quality Control Board, California Department of Fish and Wildlife, and California Geological Survey. It has also endured several rounds of litigation in the Sonoma County Superior Court. CAL FIRE[sic] is confident in this review process and that the timber operations approved in the Dogwood THP will not result in the prohibited take of any listed species.”

“What is very difficult is that Cal Fire has allowed and allows very destructive logging projects to move forward and it’s very difficult to challenge their decision making,” said Galvin. “Sometimes scientific facts lend themselves to court challenges, this is one of those times.”

In addition to being home to endangered species, the Gualala River is designated as a wild and scenic river by the State of California, meaning that the Forest Service is responsible for working with the public to maintain the Gualala’s free flowing condition, water quality, and other values.

Galvin believes a variety of the activities carried out during the timber harvest would adversely impact the listed species, by reducing shaded river areas by changing the canopy, increasing erosion and sedimentation of rivers and subsequently disrupting the aquatic food chain, direct crushing of the red-legged from equipment and felling, and other activities.

“This has all been glossed over by Cal Fire,” said Galvin. “Under the Endangered Species Act there are citizen suits provisions to enforce a law when it isn’t being enforced. We want habitat protection for steelhead, red legged frog, and the other listed species in the area and that’s what the law calls for.”

Bennet also mentioned that protecting the spotted owls ends up keeping yields low and logging levels down. “The spotted owl rules themselves are a limiting factor because you have to keep quite a bit of habitat for the owls,” said Bennet. “By keeping that habitat you can’t overlog. That’s an unintended consequence of the Spotted Owl guidelines.” Additionally, he explains that sustainable logging is in the best interest of the land owners.

When the Center for Biological Diversity looked at the Friends of Gualala River’s fight over the Dogwood project, they found that they agree with FoGR that there could be tremendous and serious impact from this project.

“It’s something we’re honored to try to help with,” said Galvin “If we don’t succeed, that would be tragic. An important redwood forest would be cut down. If we prevail it will put other timber companies on notice that if they’re going to harm or kill endangered species they’re going to have to get a take permit. We hope that it will send a strong message to timber companies that there are people prepared to enforce federal law.”