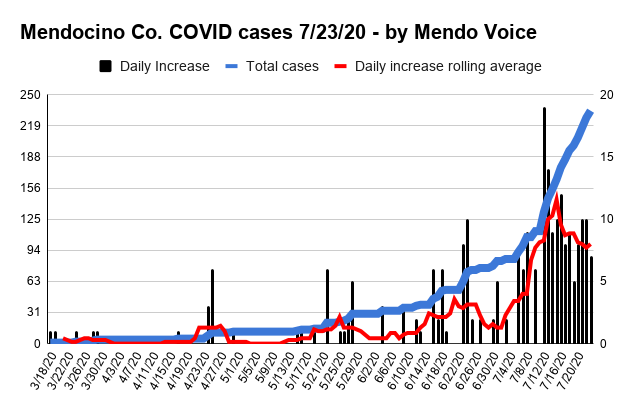 This graph shows total case count (left axis), and the daily increases, as well as a 7 day rolling average of increases (right axis).

WILLITS, 7/24/20 — One more resident of the Sherwood Oaks Health Center, a skilled nursing facility in Fort Bragg, has died of COVID-19, bringing the total number of deaths at that facility to three, and the total countywide to five. Just yesterday another death was announced at Howard Hospital in Willits.

In a brief interview, John Cottle D.O., medical director of sherwood oaks health center, confirmed that one more patient died yesterday. He added that all three patients to have died were elderly and had pre-existing conditions.

The first case at the nursing home was confirmed on July 13, less than two weeks ago. Since then 11 residents and seven employs have positive. Three residents have died of COVID.

Sherwood Oaks is a skilled nursing facility, a kind of long term care center that serves not just elderly, but other people with disabilities who can’t be cared for at home. They also do rehab for people who have, for instance, recently broken a hip.

Some of the residents who have fallen ill have recovered and returned from the hospital to the home.