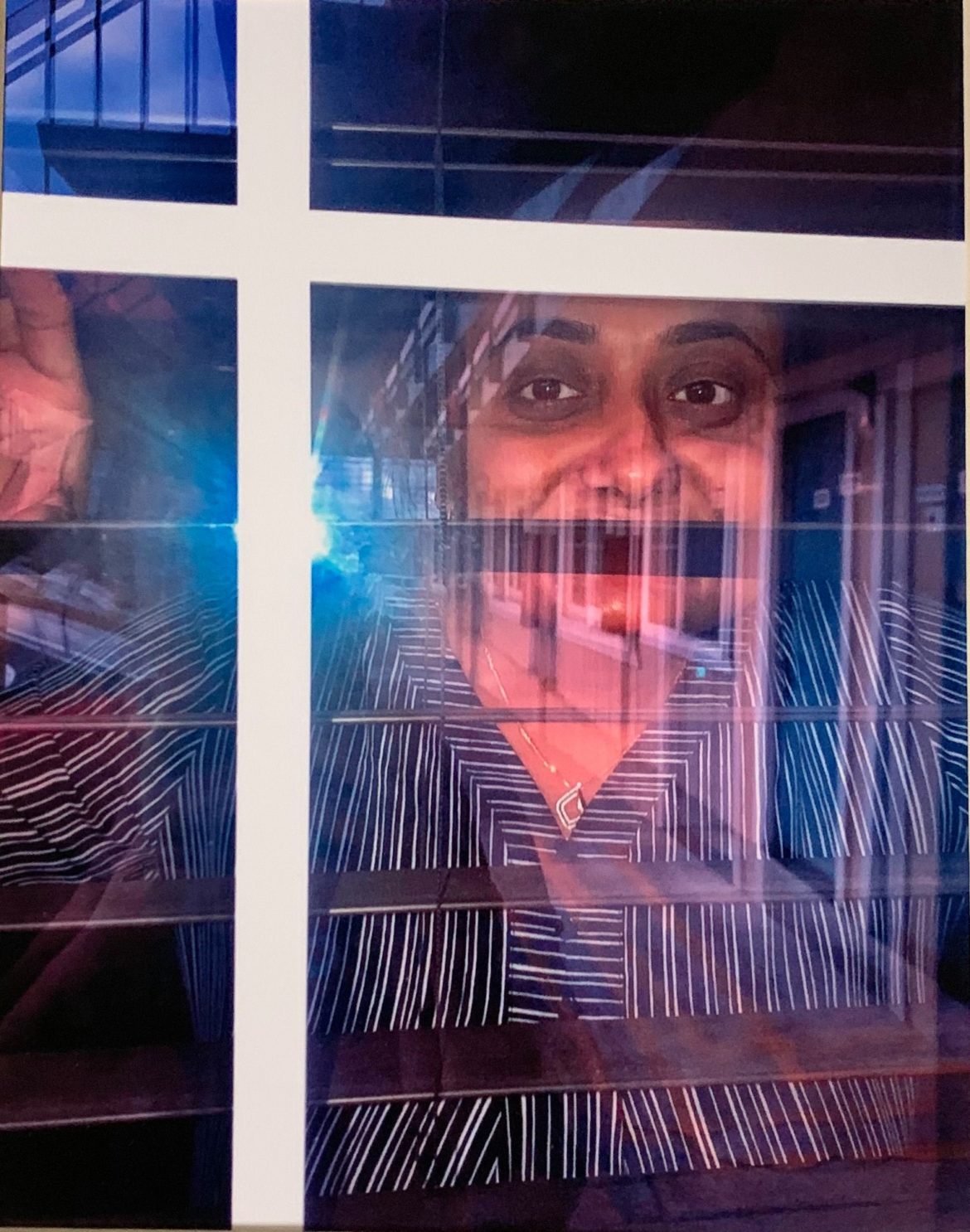 MENDOCINO Co., 6/24/20 — Mr. Lech Slocinsky, photography teacher in Ukiah High, was in Santa Barbara in mid June when he received a surprise text from Diya Patel, one of his students. Diya thought that someone might be prank-messaging her about winning the Congressional Art Competition.

Then U.S. Rep. Jared Huffman called. “That’s when we knew it was real,” said Slocinsky.

Diya Patel, a junior at Ukiah High School, began her shelter in place on March 17 with her sister, mom, dad, and grandparents in their home in Talmage.

Like students across the world, Diya had to complete her school year online. Among a slew of other classes, she took Beginning Photography with Mr. Slocinsky.

For one photojournalism assignment, Patel had to document everyday life in quarantine. Moved by the cabin fever of quarantine, Patel stepped outside and used her iphone 8 to snap a photo of her mother looking out through open shades of their window. In the portrait, her mother’s gaze melds with the reflection of an outdoor corridor. Dark window blinds line the photo, and bright white panes frame it against a purple-shaded background. The photo captures the cabin fever of quarantine and is aptly titled “Trapped.”

“I edited the photo to create a bigger contrast to the colors so there is greater emphasis on the shades of purple and the subject,” said Diya. The different reflections, combined with the dark green doors and purple sky created a “dramatic” mood, she explained.

“The class was actually the first time that I studied photography,” says Diya, who, along with her fellow students, took three photos every day of quarantine for several weeks. In total, the class took over 450 photos, which were collected in a gallery that can be viewed here.

“I’ve encouraged my students to submit photos to the competition for the last seven years, but we haven’t won the entire district until now,” said Slocinsky, who has been teaching photography at Ukiah High for 12 years. “I looked at the photos they took and recommended ones for them to submit.”

As it turned out, Mr. Slocinsky’s recommendations were sound. On June 16, three months after shelter-in-place began, Representative Jared Huffman announced that Patel had won the 2020 Congressional Art Competition for the 2nd district of California.

“As our community grapples with life during a pandemic, art is a tool that serves as a positive, transformative outlet,” said Huffman. “Congratulations to Diya, and to all the talented students who participated in the competition. I am grateful to artists, teachers, and judges for their dedication to make sure this beloved tradition continues, even during this challenging time.”

The Congressional Art Competition is a high school visual arts competition that began in 1982 and is sponsored by the Congressional Institute, a non-profit organization that mainly organizes retreats for Republican Congress members but also provides non-partisan educational resources and sponsors events such as the Art Competition. An estimated 650,000 students have participated since its inception, and about 30,000 high school students participate annually.

Patel’s winning photo will be displayed for one year in the U.S. Capitol along with winning art from other congressional districts. She will also be awarded two round-trip tickets to Washington D.C. to attend a ribbon-cutting ceremony and reception this year’s new art display. The date of the ceremony and reception has been delayed by COVID-19, and is still to be determined.

Back at home, Patel is happy to have won the competition, but is uncertain if she will  pursue photography. “I don’t know what I want to study [in college]…it’s nice to have it as an option though,” she said.

When asked what her future plans were, she said “I’m thinking about what I want to study in college…and it’s hard [to choose].” Aside from academics, Diya played volleyball for five years and was part of an award-winning mock trial team last year.

In the meantime, she is starting to spend more time with friends as the county continues with reopening. “We’re still careful, of course,” she said, “But it feels like things might be getting back to normal.”

This fall, Patel will begin her senior year at Ukiah High School. She looks forward to her final year of high school, but is also concerned about how it will be affected by COVID-19.  “I really hope that we can still have normal experiences such as senior trips, pictures, and just getting to have a good time with friends.”

For reference, here’s the full press release on the 2020 Congressional Art Competition from Rep. Huffman’s office:

Diya’s winning artwork will be exhibited in the U.S. Capitol Building for one year, along with artwork from each congressional district in the country. As the winner of the competition, she will receive two round-trip tickets to Washington D.C. to attend a ribbon-cutting ceremony and reception for the new display. The timing for these events has been impacted by COVID-19 and the recognition dates have not been identified yet. All participants receive a certificate of recognition.

“As our community grapples with life during a pandemic, art is a tool that serves as a positive, transformative outlet,” said Rep. Huffman. “Congratulations to Diya, and to all the talented students who participated in the competition. I am grateful to artists, teachers, and judges for their dedication to make sure this beloved tradition continues, even during this challenging time.”

Marin winner: Sabine Fuchs, The Locust School, “Yes We Can!”

Each spring, the Congressional Institute sponsors a nationwide high school visual art competition to recognize and encourage artistic talent in the nation and in each congressional district. Since the competition began in 1982, more than 650,000 high school students have participated nationwide.

High-resolution photos of all finalist submissions may be found here.