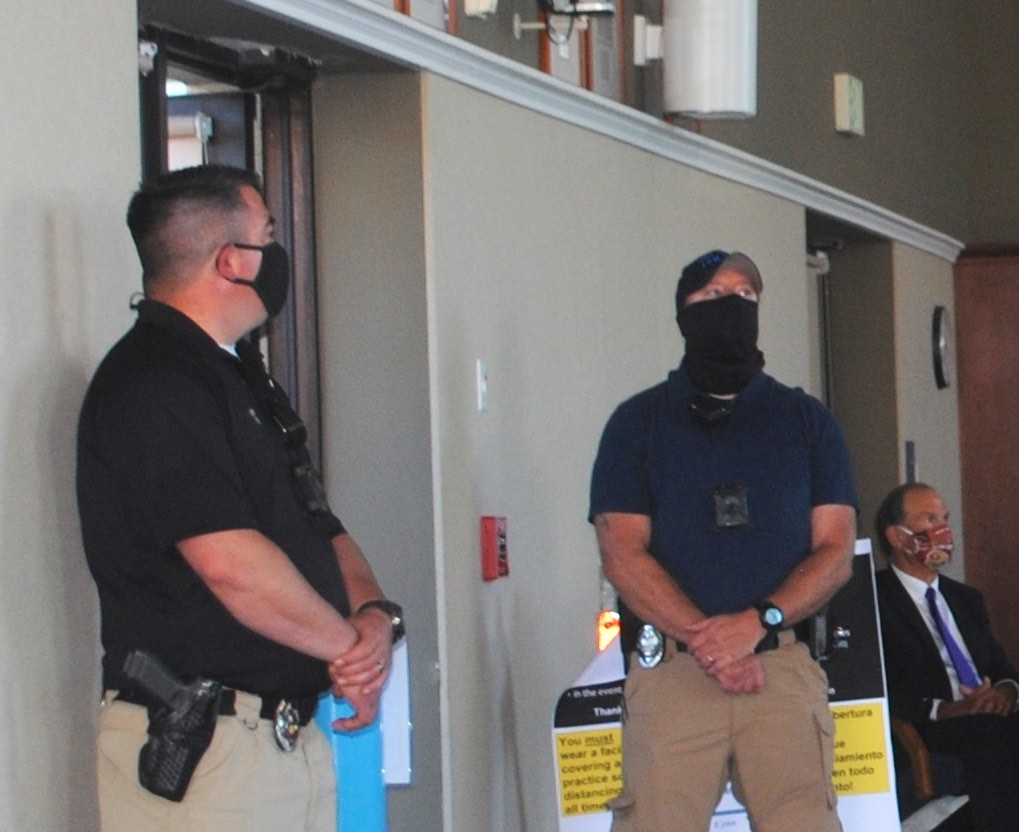 Two Fort Bragg police officers are shown at Monday's City Council Meeting, where they shuttled people in and out to speak, helped provide hand sanitizer and asked people to wear masks and follow taped off social distancing — Frank Hartzell

FORT BRAGG, 6/23/20 — Although the Fort Bragg Police Department is currently five officers short of full staffing, Chief of Police John Naulty supported a new city policy that prohibits hiring officers with one sustained serious charge or two serious complaints by different citizens that were not sustained. The council voted unanimously for the resolution that creates the new policy at Monday night’s June 22 meeting at Fort Bragg Town Hall.

Naulty said the new policy is basically what the city is already doing; the last three officer candidates were disqualified after stringent background checks. City Manager Tabatha Miller said Vice Mayor Bernie Norvell introduced the idea at the last meeting, resulting in the late addition to the agenda of a meeting otherwise entirely about the proposal to put the city’s name change on the November ballot.

“The recent incidents of police brutality across the nation has raised this issue to the forefront, “ Miller told councilmembers. “If you think about it, one of the most effective ways to stop police misconduct is to hire the right individuals,”

Norvell said the city manager, COP, and fellow councilmember Jessica Morsell-Haye came up with the resolution. Norvell said there is not a current problem with hiring unqualified officers, but police departments can find themselves in a pinch to hire when they become understaffed: “This council won’t be here forever, this police chief and city manager won’t be here forever. This is addressing the need that we will be only hiring good people going forward, with this resolution in place.”

Councilmember Lindy Peters wondered if the department could really find out what is in protected personnel files. Naulty explained the extensive process his background check expert goes through. In a recent case in which an officer was disqualified, the investigator went to the community where the officer had worked, pulled the files, and read them page by page, then prepared a thick binder for the chief to review with pros and cons. This is done for each candidate. “I don’t want to have to babysit anyone. What they do out there reflects on all of us,” said Naulty.

In an interview, Naulty said officers are currently getting six to ten hours of overtime in a week. The amount of hours varies, with some officers picking up entire 12-hour overtime shifts due to summer vacations.

Naulty said the police department has not had a serious allegation from the public since he took over as chief in February. Naulty has fired one officer, but that was not related to an allegation.

There have been instances in which force was used when someone resisted arrest. Those instances are investigated each time. Naulty said the department has an extra layer of documentation on use-of-force allegations. The department currently uses a restraint that wraps people up who resist arrest.  “It’s like a mummy thing and protects them so they can’t get hurt,” Naulty explained.

Naulty said the department budget covers 14 sworn personnel, ten officers and four supervisors, but currently has nine working. One is out on medical leave, and one is in the police academy. Naulty could hire three officers right now if he could find quality people to fit with the existing staff. There is also a school resource position but due to school closures, that officer has been helping out in other areas.

Two members of the public spoke in favor of the resolution, but didn’t give their names in a way this reporter could hear. Identifying speakers is a special trick in the age of Covid, with everyone at the meeting fully masked.