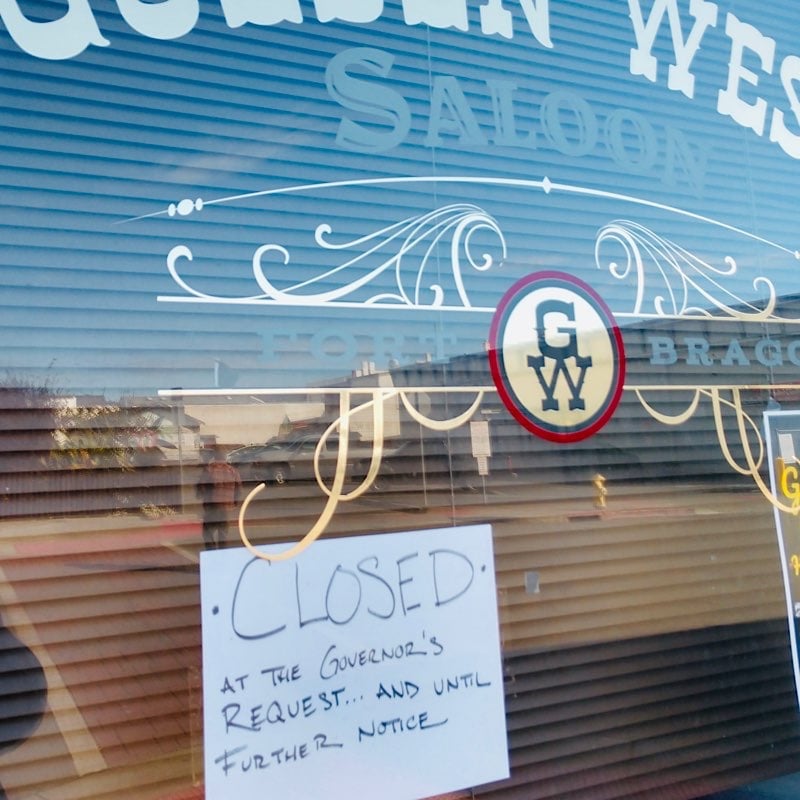 A bar in Fort Bragg, closed due to the coronavirus pandemic - by Frank Hartzell

FORT BRAGG, 3/18/20 — St Patrick’s Day 2020 might be remembered as the day the party ended in Mendocino County, as the county acted at speed rarely seen in government, to close all the bars, convert restaurants into take out and announce that residents would be legally required to shelter-in-place, except for essential jobs and tasks, starting tonight at 10 p.m.

How this will go down in local history depends on how much more the local world is turned upside down by efforts to protect the population from the COVID-19 pandemic by implementing changes will the strictest peace-time restrictions on freedoms and movement in at least a century.

The result was that not one bar was open on St. Patrick’s Day in Fort Bragg, a town which boasted more than two dozen bars during the heyday of the timber mill. While the closing of bars and the pushing of restaurants to do only takeout has been attributed by much of the media to Gov. Gavin Newsom, locally Mendocino County has provided the legal heft that quickly prevented social gatherings deemed dangerous. County health officials worked until almost 9 pm Monday night preparing a press release and legal order that was implemented with stunning speed on Tuesday, conversations with merchants revealed. Previously, there had been only a recommendation against gatherings.

At midnight Tuesday, an order issued that morning by Dr. Noemi Doohan, County Health Officer, went into effect. The order attached criminal penalties to those who hold non essential gatherings of more than 49 persons. The order did not apply to gatherings deemed “essential” such as grocery stores, pharmacies, offices and schools.

Just like that, mandatory hand sanitizer and “social distancing, ” a phrase as novel as the virus it protects the public from, became the law of Mendocino land. “The age, condition and health of a significant portion of the population of the county puts it at risk for complications, including death, from COVID-19,” the order states.

County Public Information Officer Sarah Dukett agreed the speed everything has been happening at is unprecedented. “This is a rapidly evolving situation. The information could change within the hour,” said Dukett

It had been a different story when this reporter went out on Monday afternoon in Fort Bragg and found two bars planning St. Patrick’s Day parties while the other five bars on the Coast had closed. Asked how an order that wasn’t to go into effect until midnight could cancel so quickly cancel celebrations set for Tuesday night, Dukett pointed out most bars stay open past midnight. By early afternoon Tuesday, all the St Patrick’s Day parties this reporter could find had been canceled. Yes, things are happening that fast.

The Tip Top Lounge at 321 N. Franklin was also closed on Tuesday. On Monday, more than a dozen customers enjoying the fare, the bartender and each other’s company at the Tip Top. This reporter bellied up and ordered club soda. None of the six people I talked to was worried about getting the virus from sitting in close proximity. They were happy the bar had made a place for them.

Next to me was Henry Patel, owner of Ebb Tide Lodge. He said 15 out of 23 guests canceled at his Inn over the weekend.

While he feels the Coast is relatively safe and that the panic is overblown, he doesn’t argue with guests who want to cancel. Businesses all over California are granting massive amounts of cancellations and refunds.

“I can’t blame them [for canceling their trip]. They are scared,” said Patel.

He thought The Tip Top, with its anciently smooth bar and traditional pool tables and darts was making the right choice on Monday.

“We haven’t had any cases here on the Coast. When I come here I see locals. I don’t see many new faces,” Patel said.

An interview with owner Terri Beer was hoped for but she chose to close the historic Tip Top on Tuesday. After being told all the facts, this reporter still had trouble believing nothing was happening in Fort Bragg on St Patty’s Day.  A 10:30 PM silence confirmed that quiet and dark truly reigned.

On Sunday, Gov. Gavin Newsom had recommended that the state’s bars, wineries and brew pubs all close. Most did, but reports from around the state showed many were ignoring the recommendation. Then the county went to work, culminating in a noon Tuesday press conference that lasted more than an hour. Other counties all over California are implementing even stronger measures. Local businesses also report being contacted by county officials Monday and Tuesday. Merchants reported having been served the order and county officials inspecting the processes being used to clean countertops, door handles and “high touch” places in markets.

Asked if the county had greatly increased its staffing of field efforts related to the order and coronavirus safety measures, Dukett said she couldn’t comment at that time.

Tuesday night Mendocino County issued the shelter in place recommendation that had come out at noon to a press release saying an order to shelter in place would be issued and go into effect March 18 at 10:00 pm, which will make staying home another legal requirement rather than a suggestion — again, for non-essential tasks, such as enjoying a pint in a bar.

As of Tuesday, 52 tests had been done in Mendocino County, with 21 negatives, zero positives and the rest pending, it was announced at the press conference. Officials promised immediate release of the news when the first Mendocino county positive test hit. So far Lake County has also been spared any cases. Lake County is also planning a shelter in place order.

While this reporter found bars open on Monday afternoon, not one was to be found on Tuesday afternoon. On Tuesday, the person at The Welcome Inn who answered the phone said the bar would not be open Tuesday night, saying fines had been threatened this morning.

Meredith Smith, owner of Mendocino Cafe & Flow used the MCN Listserve to ask her community whether she should remain open. “If people are instructed to stay home, who will serve the public?” Smith wrote. Smith was presented with the order to close at her restaurant by a county official.

“People coming up from the Bay Area or other places will co-mingle with any locals, and the risk of transmission in our county will increase,” coast resident Sakina Bush responded to Smith’s online query in a listserve discussion. “Objective reason says that minimizing transmission is the smartest, most reasonable thing to do. I wish, for the safety of our community, that you would limit your services to take-out only.”

Smith responded, “Do you think people will continue to come up? Well, I guess if it were me/my family and we were in good health I might well get… out of the cities…do we barricade or do we welcome them? Good question!”

Smith posted the order in the window of Mendocino Café.

Restaurant owners and others involved in non essential public gatherings required mitigation measures including ensuring that nobody has to get within six feet of anybody else, providing full refunds at no cost and giving all guests warnings about the dangers of coronavirus.