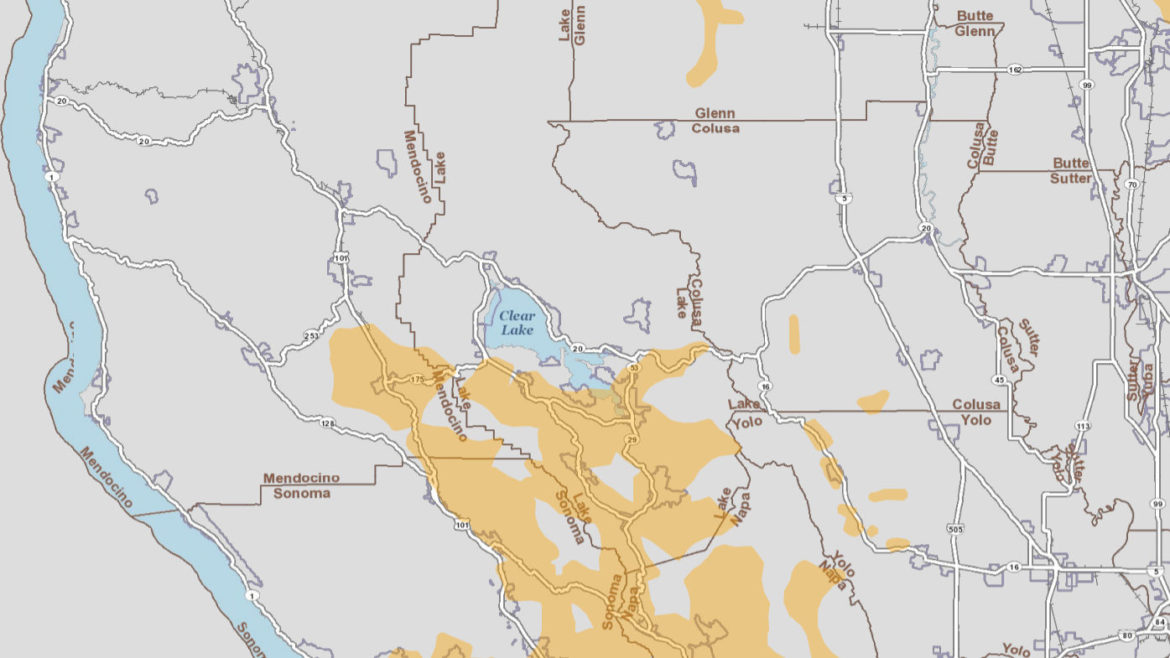 Here is the map of the parts of Mendocino County and Lake County that will have their power cut tomorrow morning. This map is from PG&E and is current as of the afternoon of Nov. 19, 2019

MENDOCINO Co., 11/19/19 — Pacific Gas & Electric has begun scaling back their statements about the scope of tomorrow’s planned power shut-off, or as they call it “PSPS.” Whereas they had previously included Gualala in the areas scheduled to have a blackout, they are now saying that in Mendocino County the shut-off will only affect Hopland, the McNab Ranch area, and spots right next to those.

The blackout is scheduled to begin early tomorrow morning, Wed., and to continue through at least Thursday morning, at which time the “all clear” is expected to call sounded, and inspections and re-energization of the lines can begin. The number of customers affect in Mendo is scheduled to be around 1300 now.

On the weather side of things, the forecast is a little complicated. While a red flag warning has been issued for much of the North Bay, and Central Valley due to the high winds and extreme dryness of the vegetation in NorCal, Del Norte and Humboldt counties are due for a little rain and the Sierra Nevada is expected to see a light dusting of snow. Mendocino County essentially sits in between the region of light rain and dry, fast winds.

You can see the map of the Mendo-Lake area above, if you’d like see see a trove all all of PG&E’s current maps, follow this link, it appears to update daily. Otherwise click here, or scroll down for detailed PDF maps of just our region. By now, all people affected should have received a call or text message alerting them that they’ll lose power, but we’ve seen in past outages that this isn’t necessarily the case, and the condemnations of PG&E’s communications skills have been almost continual.

We want to make these articles basically useful for you our readers, so to reiterate: this article includes several maps; Gualala is now not scheduled to lose power, Hopland is, as is McNab Ranch; large areas of Lake County, especially south of Clear Lake, are expected to loser power. The following places are NOT expected to lose power: Laytonville, Fort Bragg, Willits, the Anderson Valley, the Mendocino south coast, Ukiah, Redwood Valley, Potter Valley, Covelo.

Most of us have been through this enough times to know the drill, but for everyone who would like little background, keep reading:

The planned shut-off is scheduled as a preventative measure due to the high winds and low humidity that is forecasted to hit Northern California later tonight. These “wind events” are similar, but not identical, to the more common Santa Ana Winds of Southern California, in which a high pressure weather system, concentrated over the Great Basin pushes west, creating these low humidity, high velocity offshore winds. (The Wikipedia page on the winds gives a very good summary for anyone interested.

In past years these strong winds have downed PG&E power lines, or caused the uninsulated lines to spark against tree limbs, leading to devastating fires including the Nuns Fire, the Camp Fire, and our own Redwood Fire.

As a result PG&E, with sanction from the State of California, has taken to preemptively shutting off the power in areas that are expected to experience these high winds.

The following are a set of PG&E PDF maps showing the areas scheduled to lose their power. These maps are current as of Tuesday afternoon, and the actual places that have the power cut may vary and depends on weather:


Here is our coverage from yesterday:

Outages will be isolated to Hopland, Gualala areas; maps released (updated 11:40am)