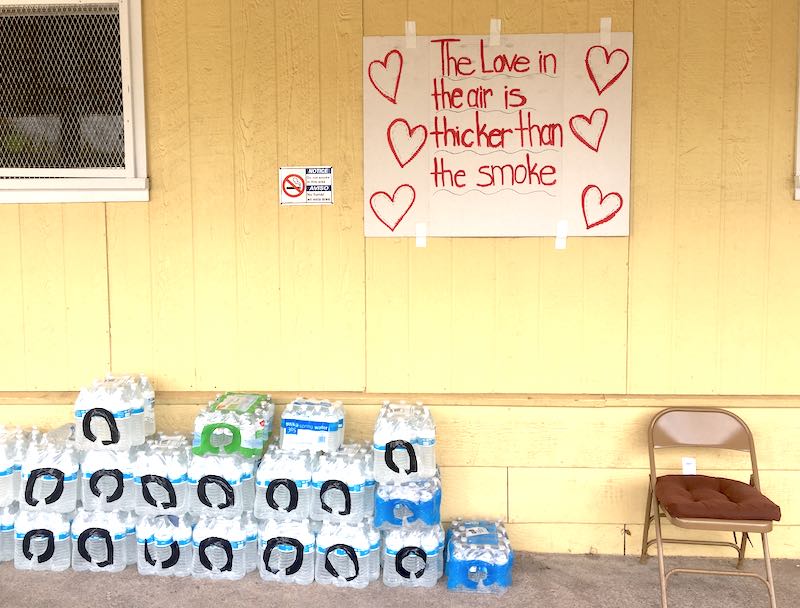 MENDOCINO Co., 10/8/19 — Two years ago tonight power-lines were struck by tree limbs, sparking amidst violent, hot, dry winds, and setting off an army of small flames and spot fires that grew in a series of terrible conflagrations across Northern California, called by some the Wine Country Fires, and dubbed by Cal Fire the 2017 Northern California Fire Siege. Between them the Tubbs Fire, Atlas Fire, Nuns Fire, Cascade Fire, and here in Mendocino County the terrible Redwood Fire, 44 people burned to death that fateful night. The Redwood Fire destroyed hundreds of houses, and killed nine people here in Mendocino, including two young teenagers, siblings Kai and Kressa Logan.

That night left houses burned to the ground, and scared the landscape as well as the hearts of thousands of people across our home. Tonight, as we face the prospect of widespread power outages, an action taken by PG&E to avoid the horrors of two years ago, and forecasted weather conditions far too similar to those that we remember on this grim anniversary, people across the county are overwhelmed by emotion — recalling the memories of those wildfires.

But even as we nervously watch the ridgelines for the omnious glow of a wildfire, we can also take solace and pride in the the tremendous strides we have made as a community since then, during the two years of rebuilding, increasing resiliencies, and creating new solutions to the “new normal” as a community. Be it in the flourishing of local fire councils, the community-wide art projects, the increased neighborliness between neighbors, it is clear that our community has only been strengthened by those experiences.

Here at The Mendocino Voice, we know the events of that night and the following weeks will remain indelible in our memories, and has undeniably shaped the way we approach our coverage of local news, as a public utility and service to our community. We knew when we started this news service that we wanted to bring real-time, important information to our readers, but it was not until we first saw the string of fire trucks with sirens heading south on Highway 101 as the power went out, til two days later live-streaming the Sheriff’s press conference that we realized just how necessary reliable, accurate information is during an ongoing emergency, and how much we rely on our friends and neighbors and readers to help us get that information out. As it has shaped the lives of so many, the Redwood Fire has forever changed the way we write and cover breaking news, how we engage with our readers, and fundamentally how we approach our role in the greater community.

Here’s our coverage from that first evening, and our coverage of the fires as a whole, (videos here) which ran from 3 a.m. on October 9, 2017 through recent weeks, from breaking news to long-term recovery.