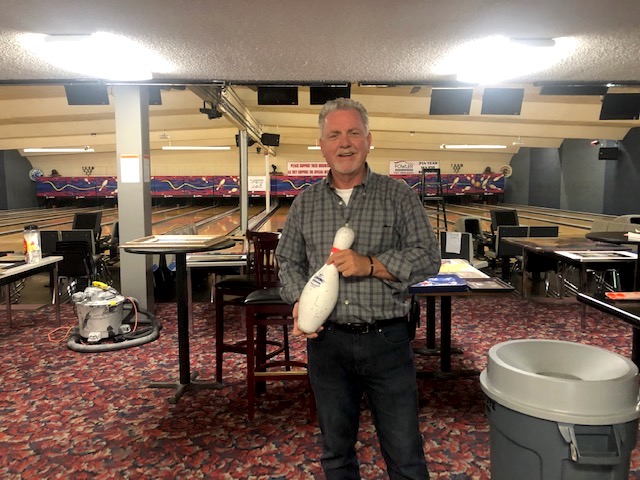 Mike Schutz holds up one of the pins for sale at Yokayo Bowl.

UKIAH, 9/17/19 — There will be no more strikes or spares on the lanes of the Yokayo Bowling Center, which ceased operation this weekend after just over six decades in business. But there are still bowling balls — along with shoes, chairs, tv, tables, decorations, and much more — filling the space on North State Street, and it’s not too late to buy some of the remaining equipment before the owners pack up at the end of the month. Also, to help you drown those tears of nostalgia, the bar attached to the lanes is still open, and will remain so until Sunday, with special Thursday lineup featuring Duckie, first musician to play at the venue, as well as DJ Christian on Friday, along with drink specials.

“I want to say thanks to everybody for supporting Yokayo Bowl over the 61 years and especially the last 11 years that I’ve had it,” said owner Mike Schutz in an interview. “I somewhat achieved my first level of owning the business, which was to make it a more family environment to come, and try to increase more participation in over events that we were eventually going to do here as a small venue. But we’ve come to an end, and I’m just as sorry to see it closing as everyone else that has come and spoke to me about it. I appreciate all the thank-yous, and the tears that we’ve shed here in the last couple weeks especially.”

On Wednesday afternoon, a giant bowling ball and pin propped the doors open while Schutz and employee, Amber Shortbridge, surveyed the inventory, and the center will be selling off a variety of remaining items over the next week and a half. The bar will remain open until Sunday, featuring a special final musical performance by “Duckie” on Thursday evening from 8 p.m. to 11 p.m., the same musician who played the first show at the venue in 1969. On Friday, there will be a local DJ, and on Saturday there’ll be drink specials to help the bar clear out the remaining inventory.

Currently, the lanes are closed, but items for sale include balls, pins, and shoes, fixtures, a variety of decorations, the tvs which previously displayed scores, souvenirs, and much more. Schutz said that while a lot of the equipment would be going to local businesses and community organizations, there would be new items available over the upcoming week as the storage spaces were cleared out and staff and owners decided what to put up for sale. Standing near boxes of pins, Shortbridge held up one that was adorned with a signature. A player that had scored a 300 had gone around and signed some of the pins, she explained, displaying the “Elvis Presley” written across one of the pins. After the building’s owners declined the renew the bowling alley’s lease, the business will vacate the space at the end of the month after being operational for over six decades.

Schutz noted that people keep stopping by hoping to bowl, including several couples who drove over from Lake County, and it’s been hard to break the news to them. Duckie approached him several weeks ago, asking to play one final show, and he’s glad it will be the last one at the venue. Reflecting on the different employees and loyal customers who have returned over the years, he added, “My last thing is to thank all the league bowlers that have supported the leagues that we had here for the last 11 years — without them, the business wouldn’t have survived through the lean years especially when the economy was down.” Schutz said, “It’s a sad, sad day watching it close after all these years.”