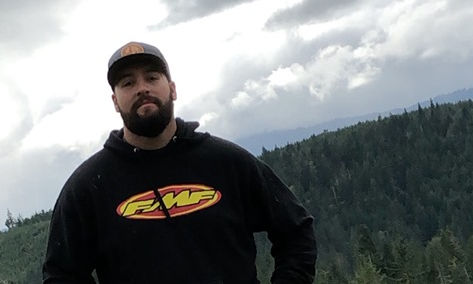 MENDOCINO Co., 7/24/19 — The Mendocino County Sheriff’s Office and other agencies conducted an extensive search for Derek Weidner, a missing Texas man, whose vehicle was found along U.S. Route 101, and the Russian River, and is is feared to have been suicidal.

Today close to 40 personel were out searching for him along the Russian River banks, with dogs, and along both sides of the freeway in the neighboring hills, according to Lt. Shannon Barney of the MCSO. They covered about six miles of river bed.

Today and on other occasions, a variety of agencies have sought the man, including Mendocino Search and Rescue, Cloverdale Fire, Hopland FIre, Ukiah Valley Fire, Little Lake Fire, the CHP and the MCSO. Weidner’s vehicle was first located on Saturday morning, “at milepost marker 6.70, South Highway 101 in Hopland.”

Here is a notice from the MCSO from a few days ago, and below that are embedded Facebook posts that the MCSO had made. Anyone with information about Weidner’s location can contact the Santa Rosa Police Department at (707) 543-3600.

WE NEED YOUR HELP!
Mendocino County Sheriff’s Office (MSCO) is seeking the public’s assistance on a missing persons case.
MCSO was contacted by the Santa Rosa Police Department (SRPD) regarding Derek Weidner, a 25-year-old male who is possibly suicidal. Derek is from Webster, Texas and was last seen on Friday evening, 7/19/19, around 10:00 pm at the Sonoma County Fairgrounds RV Park, 1500 Ashton Avenue, Santa Rosa, CA. Derek was in the Sonoma area doing electrical line work for a private company.
Derek is 6’3″ 290 lbs with brown eyes, black hair, heavy build with a beard.
On Saturday morning, 7/20/19, the missing person’s vehicle, a 2015 grey GMC Denali pickup, Illinois license plate #1242790B, was located at milepost marker 6.70, South Highway 101 in Hopland, CA.
An officer from CHP – Ukiah located the vehicle early Saturday morning but at the time there had not been a missing persons report filed.
The MCSO and the CHP have been searching the area with a CHP helicopter as well as with CHP officers, Sheriff’s Deputies and K-9s. A more extensive search with the Mendocino County Search and Rescue (SAR) team is scheduled for tomorrow in and around the area where the vehicle was located, using trailing dogs and ground teams.
We ask anyone with any information that could help find the location of Derek Weidner to contact the Santa Rosa Police Department at (707) 543-3600.

One thought on “After days of searching, Derek Weidner remains missing”