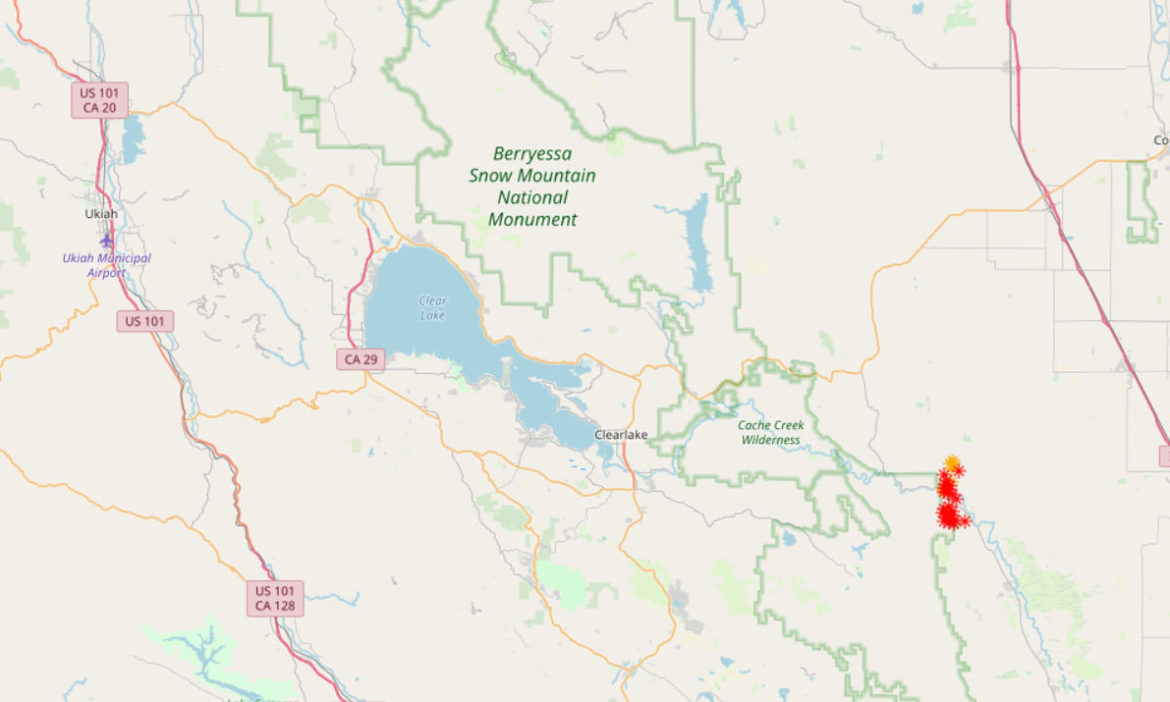 A map showing the Sand Fire in relation to Ukiah.

MENDOCINO Co., 6/9/19 — Fire season has arrived to Northern California this weekend, with a slew of small fires springing up across the area, and the Sand Fire in Yolo County ballooning up to 1800 acres, closing roads and forcing evacuations.

A small grass fire is burning in Regina Heights, near Ukiah. Local residents have doused it with water, and the fire is surrounded by roads, and does not appear to have much potential to spread, but Cal Fire and local departments are responding. The fire was mostly out by 3:10 p.m and the response was called off.

A structure fire was reported in the Bell Springs area earlier today, but does not appear to have significantly spread into the wildlands, and may have been an illegal burn pile that is now extinguished.

On Friday the National Weather Service issued a red flag warning for the North Bay, the northern Central Valley and parts of the Sierra Foothills. And the prediction has been proven true with some of the first large fires of the season. In addition, these conditions led PG&E to shut off power first to some 1,600 customers in the North Bay, then to 20,500 customers in Butte and Yuba counties.

PG&E’s new policy will be to preemptively shut down power to areas where fire danger is greatest, and to not turn the power back on until a manual inspection of all the lines in that area has been preformed. This means that in some places power could be off for more than 48 hours, and it’s a situation that we in Mendocino will likely be facing in the coming months.

These kinds of routine, planned blackouts might be one more part of the so-called “new normal” of California wildfires that we are facing. We are all trying to figure out what this means — for instance, at The Mendocino Voice we are investing in some additional batteries and portable solar panels to make sure that’ll we’ll be able to continue to provide you with breaking news in the event of such emergencies.

The Sand Fire stood at 1800 this morning, with 0% containment, though Cal Fire and local departments are hitting it with a lot of resources. That fire has resulted in a closure of SR 16 from SR 20 to Brooks, and over 100 people facing evacuations along County Road 41. A heavy air response is underway this afternoon. The Ink Fire in northeastern Napa County was made quick work of reaching only 50 acres before forward progress was stopped.

Currently in Stanislaus County, the Stuhr Fire stands at 600 acres, but forward progress has been stopped.

It looks like up north a small fire closed Hwy. 96 for a time:

And down in Sonoma along the coast, a tiny vegetation fire was caught early thanks to some new cameras:

Here are a couple useful websites as we enter fire season:

Here is Cal Fire’s own incident page, that shows most fires over 25 acres or so currently burning in the state.

And here is one of our favorite online resources. This version of the CalTopo map shows fire activity in the form of heat spots. The data is gathered from at least two different kinds of satellites, and is updated around every 12 hours, though sometimes longer.

And here is PG&E’s web page on the power outages.