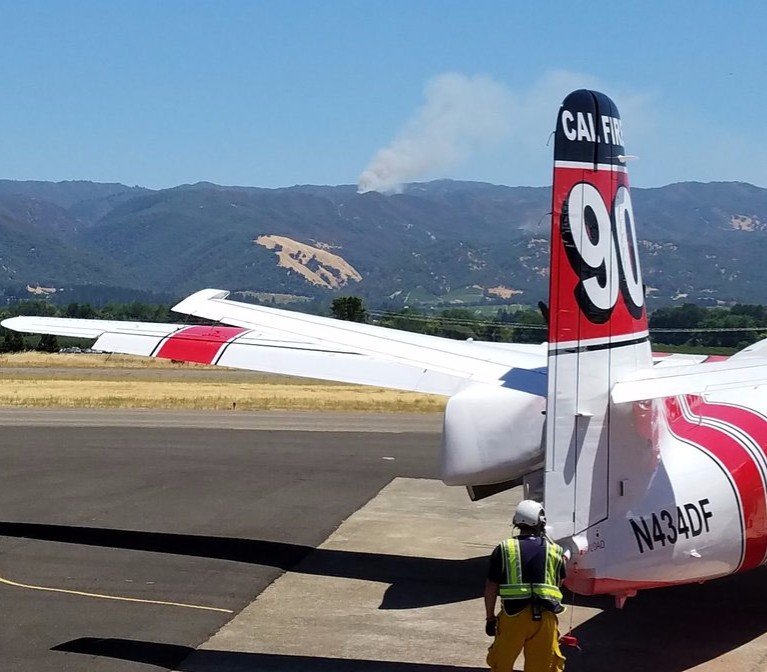 A photo of the plume of smoke coming off the Range Fire, near Ukiah. Courtesy of CalFire.

Editor’s note: This article was updated with information from Cal Fire Chief Greg Pinson at 5:15 p.m.

MENDOCINO Co., 6/11/19 — The Ukiah Airport hopes to repave their one runway, and undertake other improvements, beginning Oct. 15, with the project lasting two to four weeks, as part of maintenance projects that have been long delayed and are sorely needed. During those two to four weeks Cal Fire will be relocating their aircraft to nearby airports, likely Santa Rosa and Chico — but the planes will return once the work is done, and will not be permanently leaving, as has been implied in other outlets.

The work has to be done before the beginning of the rainy season, and is ideally done during specific temperatures, to ensure that the assphalt sets correctly. Ukiah Airport Manager Greg Owen explained to The Mendocino Voice in an interview, that the project has been pushed back as far as possible, to ensure that the planes remain available and close at hand through the bulk of the fire season.

“It is going to happen during fire season because fire season is now from June 1 till whenever it starts to rain again, and we do have to do it during good weather,” explained Owen.

Cal Fire Howard Forest Station Chief Brett* Pinson reiterated that Cal Fire had been in the loop on the planned work for several years, that they are developing plans to station the aircraft at nearby airports for the duration of the work, but said that Cal Fire would be returning as soon as the work is done.

The exact details have not been decided yet but Pinson said that the tankers and air attack tactical aircraft would be moved to Santa Rosa, or Rohnerville in Humboldt County. He also said they might be moved to Chico, but that added that Cal Fire would likely bring in another helicopter to be stationed either at the Howard Forest Cal Fire station, or at the Willits Airport, or potentially at the Ukiah Airport depending on the details of the construction.

The Ukiah Airport maintains a single runway, which depending on the direction of the wind is used in both directions, currently measuring 150 ft wide and about 4400 feet long. Cal Fire has three planes stationed there, which provide rapid response to the surrounding area, two Gruman S-2 Trackers, which operate as tankers to drop retardant, and a North American Rockwell OV-10 Bronco, which is the “air attack” command and control plane. (For a full list of Cal Fire’s planes check out this fact sheet)

As explained in city documents (scroll down for full PDF) the last time the runway was paved was in 1984, (making the pavement as old as this reporter). It was slurry sealed again in 1997, and since 2008 the City of Ukiah has been working with the Federal Aviation Administration (FAA) to secure grant funding, and clear a series of regulatory hurdles, to be able to repave the runway.

At 35 years old the runway is beginning to show its age (much like this reporter) and Owen explained that continued deterioration of the runway could imperil the Cal Fire mission, forcing them to leave for a longer period of time. ““Our pavement is in really bad shape, and it’s been in really bad shape for a long time,” said Owen. He added, “I’ve been here 11 years and my first day here they said something needs to get done with this pavement.”

Chief Pinson noted, “The runway itself is in poor condition right now, and just like potholes in the road, they need to be fixed to maintain the runway for us.” He added that large cracks in the runway at adding to the wear and tear on Cal Fire’s planes.

It’s estimated that the whole project will cost about $3.1 million, though it will be covered by a grant from the FAA. Pending approval by the Ukiah City Council today, the project would go out for bids tomorrow, with a 30 day window to accept bids and a selection of the contractor made on July 17. The details of costs, and the exact timeline of the project will depend on the contractor’s bids.

Owen elaborated that much of the decision making process is governed by the FAA, “Since it’s their money we kind of have to do what they want. If you want their money you have to play for their rule book…but this is a great thing for the airport, something that’s much needed.’

Councilmember Mo Mulheren explained that, “I think that they most important thing is that the City and the airport manager and the city manager are working closely with Cal Fire…to make sure that the impact is as minimal as possible. This funding has been a long time coming.” She added that the projected needed to be completed “or we could lose the airport functionality…it’s a really important project for our community and the timing.”

The specific timing of this work has more to do with the FAA than decisions on the part of the City. As Owen explained, the airport has had to be clear certain regulatory hurdles, and in addition the actual funding for the work will come from a grant provided by the FAA.

There had been an initial push to get the work done in the spring, but as June approached Owen realized that they would not be able to secure the grant funding early enough. The FAA wanted the work to be done in August, but Owen said that he has worked to push the repaving as late into the fall was possible, while still having good enough weather to get the project done.

After the bid is selected, the City and airport will contact the FAA with the details to ensure that they will have the grant money for the project. It’s estimated that the whole project will cost around $3.1 million and about $1.3 million will be dedicated to the actual repaving with the remaining costs going to a new taxi way, and some upgrades to electrical systems.

Though the runway is currently 150 feet wide, the new pavement will only be 75 wide, and run the entire 4400 length of the runway. Owen explained that the reduction in width is due to the airport’s current rating. While 150 feet is wide enough to accommodate larger jets, the runway is nowhere near long enough for such planes, and it only makes sense to have the runway a wide as necessary for the size plane it accommodates.

Owen said that they will not be tearing up the extra 75 feet in width from the old pavement, and he hopes to renegotiate over that issue with the FAA in the future.

Documents from the City:


*An earlier version of this article mistakenly referred to Chief Brett Pinson as “Greg,” this was a typo and we apologize.