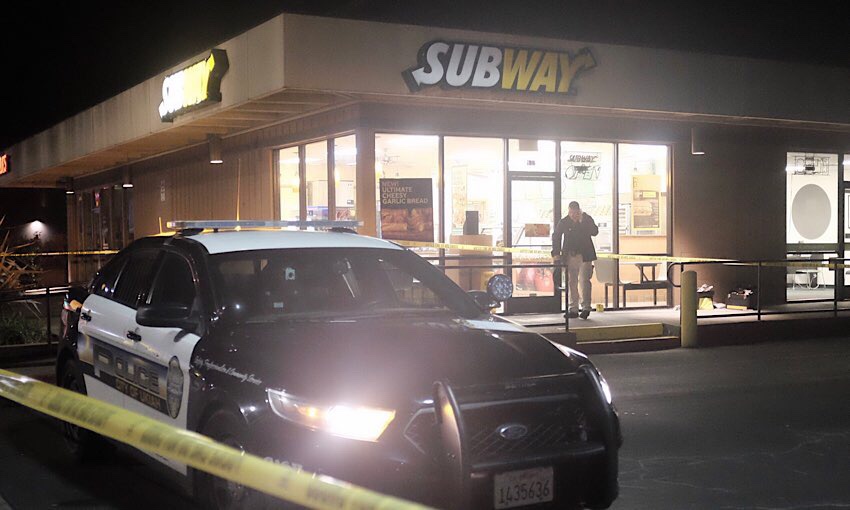 UPDATE 10:40 p.m. — Ukiah Police Department’s Lt. Cedric Crook has confirmed that the man shot tonight at the Ukiah Subway was allegedly attempting to rob the sandwich shop before he was shot.

The robbery suspect is reported to have been holding customers in the Subway at gunpoint, but Crook stated that the gun “might not be a working gun,” and was potentially a toy or replica, but one that appeared real. A customer at the restaurant shot the robbery suspect at least shot twice, and three bullet casings were found at the scene. The robbery suspect was airlifted to an out of county hospital. The customer who shot the alleged robber is the holder of a locally issued concealed carry weapon permit, and was in Ukiah because his wife was potentially in labor, however, she was apparently at the hospital, and not present while the shooting occurred.

The owner of the Subway location estimated that about $600 were taken during the attempted robbery.

The alleged robber is currently in surgery in an out of county hospital; he has been reported to be white man around 20 years old but no further identification has been released. The customer who shot the robber has been interviewed and released; it is unlikely that any charges will be filed against him.

Apparently, the robbery suspect first entered the Subway and asked to use the bathroom, then reemerged into the main area with an employee held at gunpoint. He allegedly robbed the store, but was then shot at close range by the holder of the concealed carry permit, at which point he fled, eventually collapsing on the opposite side of the parking lot in front of the Ross.

There is video of the incident from multiple sources. 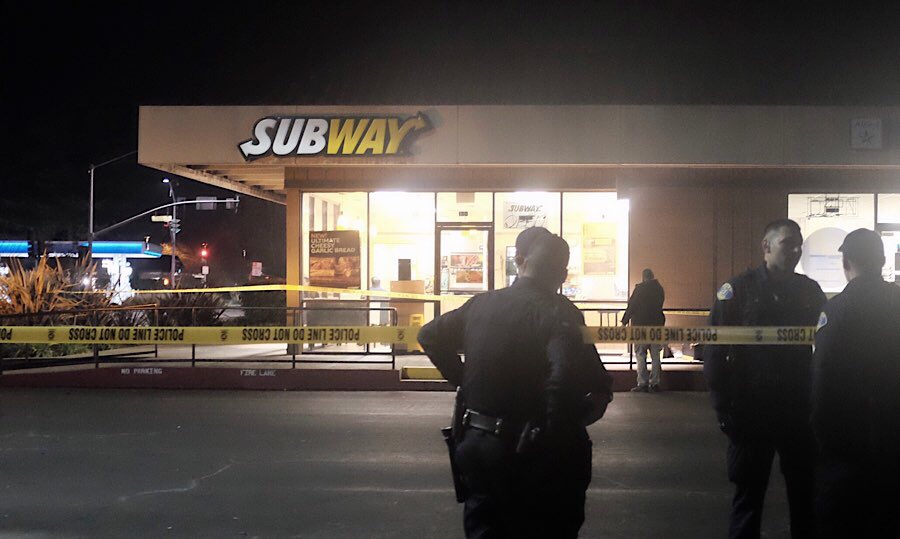 UPDATE 9:38 p.m. — According to an article in the Ukiah Daily Journal the victim was allegedly attempting to rob the Subway Sandwich when a bystander with a concealed weapons permit shot him.

ORIGINAL
UKIAH, 12/12/18 — A shooting has occurred in Ukiah, and one victim, a male of unknown age, has been airlifted to a hospital, and appears to still have been alive in the air ambulance. The shooting occurred at the Pear Tree Shopping Center, apparently outside of the Subway Sandwiches, and the victim was found in front of the Ross Dress for Less. The Ukiah Police Department (UPD) has confirmed that there was no manhunt, though they have not stated whether or not a suspect was taken into custody. According to scanner traffic a suspected shooter has been identified, and appears to be an off-duty firefighter with a concealed carry weapons permit.

With the exception of a statement from UPD that there is no manhunt in progress, we have gathered the rest of this information from scanner traffic: Just before 7:20 p.m. tonight several calls were made to the Ukiah Police Department, with people reporting that shots had been fired at the Pear Tree Shopping Center. Police responded and found a victim bleeding in front of Ross. An air ambulance was called and that person was airlifted to a hospital, presumably (given the proximity of the Ukiah Valley Medical Center) out of county. Severe trauma victims are often airlifted to Santa Rosa. The victim is male and weighs 140 pounds. It is unclear if he has survived.

Police gathered that the alleged shooter was an off duty firefighter with a concealed carry weapon permit, from Willits. Again, according to scanner traffic, the victim had apparently run from the Subway to the Ross — it is not clear at what point he was shot, nor what the motive for the shooting may have been. It is also not clear if the suspected shooter was arrested or taken into custody, though he was apparently found, without incident.

A second ambulance was called to the area, this time to Subway, for a pregnant woman who was having trouble breathing. It does not appear that this was connected to the original incident.

Editor’s note: Information gathered from the initial reports that come out over the police scanner is often incomplete and may be subject to revision as more facts are discovered.