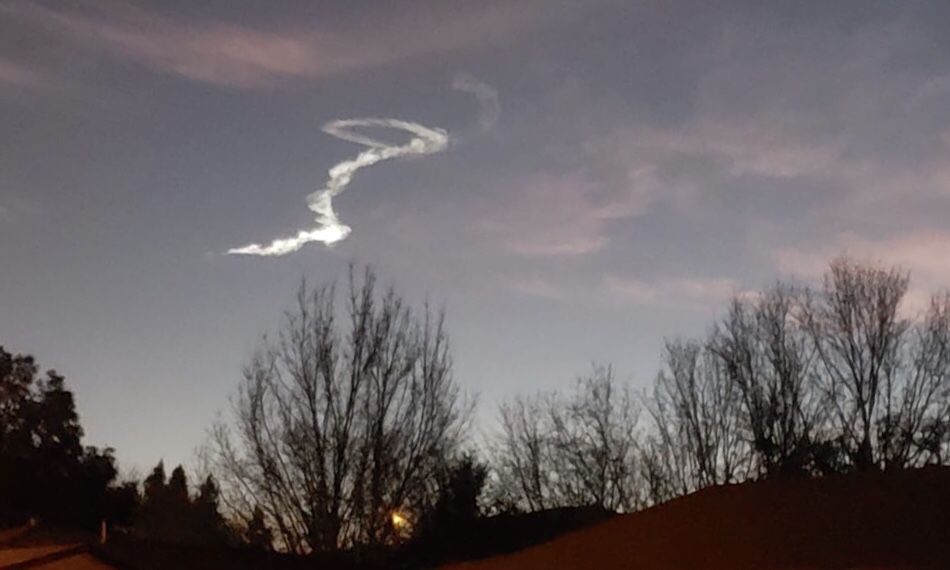 WILLITS, 12/19/18 — Was it a rocket? An alien? Or perhaps Santa on a practice run? No, the strange bright streak that appeared above Northern California at around 5:34 p.m. tonight, turned out to be a large meteor, crashing into the Earth’s atmosphere and lighting up the sky.

A Delta IV Heavy Rocket had been scheduled for launch at roughly the same time from Vandenberg Air Force Base, and many people across the state were gazing into the evening sky in hopes of seeing this manmade light show. However, that launch was scrubbed due to a hydrogen leak (the second time in about two weeks), but luckily Mother Nature stepped in with an all natural light show. The meteor was caught on dash cams, quickly falling, almost vertically, and leaving behind a bright trail, which shone high in the sky. The trail was visible at least as far south as Santa Cruz and as far north as Humboldt.

Being so high in the atmosphere, the trail of burnt up space debris still shone in the sunlight, as high altitude winds gradually wrapped it into a question mark and then dissipated it.

Tip of the hat to our friends at Berkeleyside, who noted that the Lick Observatory, which is owned and operated by the University of California, has confirmed that the bright light was caused by a big space rock.

The Delta IV Rocket launch which was scrubbed was to be launched by United Launch Alliance (ULA) a joint-venture of Lockheed Martin and Boeing — they may attempt the launch again tomorrow evening.