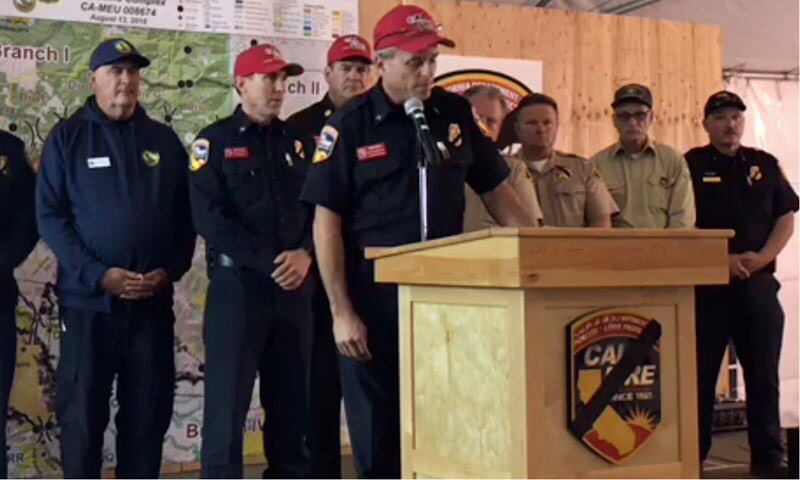 CalFire PIO Jermey Rahn speaking about the death of a firefighter on the Mendocino Complex.

A donation site has been set up to support the family of Battalion Chief Matthew Burchett, who died yesterday as a result of injuries sustained while fighting the Mendocino Complex. All of the donations to the site, which is hosted by the Utah Firefighter’s Emerald Society, will go to his family. Here’s the link.

Gov. Jerry Brown made a statement today, and flags ordered that the flag be flown at half-mast today, at the Capitol building.

“Firefighters from across the nation – and world – have selflessly battled California’s massive wildfires, and sadly today we mourn the loss of one of those heroes from Draper, Utah, Chief Matthew Burchett. Our hearts ache for his wife and young son, family members, loved ones, colleagues with the Draper City Fire Department and the entire State of Utah.”

You can also watch the 12 p.m. press conference in honor of Burchett, which took place in Draper City, Utah, today in a video included below. The Draper City Fire Chief Clint Smith, who was out of the country, provided this statement:

“Draper City Fire Department has no words to describe the depth of sorrow we are feeling upon learning of the death of Battalion Chief Matt Burchett while assisting with the devastating California Wildfires. Matt is a true hero who has given the ultimate sacrifice while serving others. Matt is a strong leader and experienced wildland firefighter who always put the safety and needs of his subordinates first, but most of all, Matt was a devoted husband and loving father. His family was his world. We are grateful to those fellow firefighters that were with Matt and for the immediate aid they were able to render. We pray for all firefighters, friend and family affected by this tragic loss. This event has rocked our small department to its very core but we will work to honor Matt’s legacy and sacrifice and care for his family.”

MENDOCINO Co., 8/14/18 — The Mendocino Complex claimed its first victim yesterday, Aug. 13, with the death of Battalion Chief Matthew Burchett, 42, of the Draper City Fire Department. Burchett is survived by a wife and young son, and had over 20 years of firefighting experiences in departments around the Salt Lake City area in Utah. 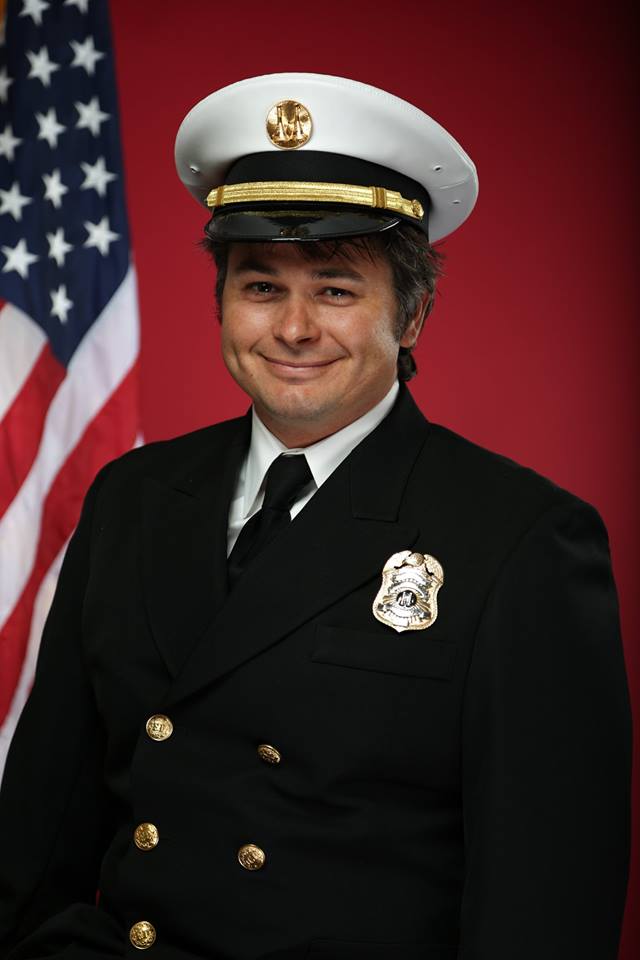 The exact circumstances of his death are unknown, but what has been released to the public, is that he was working in an active part of the Ranch fire yesterday evening, when he was seriously injured. He was airlifted to a the Ukiah Valley Medical Center, and there succumbed to his injuries.

Burchett was one of five firefighters from Draper to travel to California, to fight the Mendocino Complex fires. His four comrades are no longer actively fighting the fire and, in the words of Draper City Mayor Troy Walker, “They’ve been with him the entire time, he’s had someone with him the entire time.” The four Utahans will likely return home with Burchett.

A brief press conference was held at the CalFire incident command center in Ukiah at 10 p.m. on Monday night. Here is the video of that conference.

Burchett’s name appears to have been released at a press conference held by the Draper City mayor and fire deparment in Utah this morning. Here is that video:

At the Monday night conference Sheriffs Brian Martin and Tom Allman, of Lake and Mendocino counties respectively, also spoke. Allman gave his thanks to all the people who have come from across the country to assist here, saying, “We thank you for coming to our small corner of the world and risking your life…” He also gave a word of caution to people who remain in evacuation zones, noting that if such a tragedy could befall a trained firefighter, it could even more easily befall an untrained civilian.

Sheriff Martin said that the memory of the fallen firefighter would be honored by their continued efforts to go out and serve the community. He ended by thanking the firefighters ringing the meeting tent and adding, “Please be safe out there.”

DRAPER, Utah. – It is with tremendous sadness that we announce the tragic loss of one of our own. Last night while fighting the Mendocino Complex Wildfire in California, Draper Battalion Chief Matthew Burchett lost his life in the line of duty. Draper deployed five fire fighters to California on August 2nd, and the team has worked tirelessly to protect lives and property. The entire community of Draper is grieving our loss.

Chief Burchett came to Draper City Fire Department in May of this year. Prior to working for Draper, he worked for Unified Fire Authority for the past 20 years. Chief Burchett had extensive experience in wildland and structure fire. Chief Burchett leaves behind a wife and a young son. He was 42 years old.

This is not only a loss for our Draper Fire Department, but a loss for all fire departments in the Nation.

We appreciate all the heartfelt support from the Draper Community, Cal Fire, the State of Utah, and our family of firefighters from across the nation.

At this time, we ask for some privacy for Chief Burchett’s family as they process this tragedy.

In the coming days we will have information about funeral plans, a donation fund for Matt’s family and more details as they become available.

Progress on the fires

As of this morning the Ranch Fire has grown by an additional roughly 5,000 acres since last night to 305,490 acres, though containment has jumped up to 68%. The River Fire remains at 48,920 acres with 100% containment. Today is predicted to be another challenging day on the Ranch Fire, according to CalFire:

Today fire crews on the Ranch Fire will continue to engage an active fire front. Fire crews will continue operations on both the east and west flanks of the fire, working to protect the communities of Lake Pillsbury and Stonyford. Fire crews are working in difficult conditions and terrain to bring the fire around threatened communites[sic] and back into the Mendocino National Forest. Firefighters are actively engaging in structure protection where the fire has already reached structures and communities. The south side of the fire has had no significant events and remains in a suppression repair status with patrol.

Here is the fact-sheet from CalFire:Incident Update 8.14.18