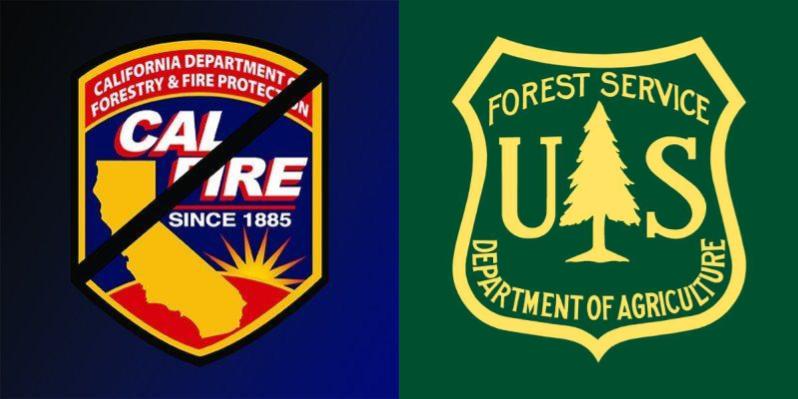 The identity of the firefighter who was killed with fighting the Mendocino Complex has been release. Details in this article:

Sad news today, on the eighteenth day of the Mendocino Complex fires, a firefighter lost his life battling the blaze. We do not yet know the identity of the deceased, nor any other details about them, simply that a firefighter died today fighting to defend people and property from this terrible fire.

More information about the circumstances of their death is pending investigation, and release of the identity of the firefighter is pending notification of next of kin.

More details will be released at a press conference tonight in Ukiah. Here’s the full statement:

Fact finding on the accident is ongoing and notification of the next of kin is in progress. More information will be released as it becomes available.

As to the fires themselves, the River Fire is now 100% contained. Though firefighters may remain on the fire for some days longer, patrolling the perimeter, dealing with internal hot spots, and generally mopping up — the fact that firefighters have achieved 100% containment indicates great confidence that this fire no longer poses any threat to the surrounding areas.

The Ranch Fire, on the other hand, continued to grow to the north, across the whole northern side. Its southern side, bordering Hwy. 20, has almost been entirely contained, and it no longer poses a threat to those communities, but in its northwest corner the fire remains active. It has apparently reached the Eel River, and is close to the shores of Lake Pillsbury, where firefighters are working hard to prep and protect structures in the Rice Forks area. According to CalFire’s evening update “Fire crews engaged in successful operations on the far west side of the fire tying in containment lines south of the Eel River.” This likely refers to a section of the fire that has been burning up to the ridge above Potter Valley, from Mid Mountain Rd. to the Eel River. Sources in the area say that firefighters have preformed massive burning operations from that ridge east into the national forest, and have created strong containment lines along those ridges.

In the east, firing operations continue in an effort to hold the fire’s progress south of Stonyford, in Colusa County. In the middle of the fire’s northern flank it continues to grow into the Snow Mountain Wilderness, where rugged terrain and limited accessibility have made fighting the fire extremely difficult.

The shelter at Mendocino College has now been closed, although there are still resources for evacuees and wildfire survivors, and NCO is still taking donations. See more information here.

Here is a short video of the progress of the fires, on a map generated with satellite data of the shape of the fire and the current hot-spots. This data is updated every few hours as the satellites pass overhead and publish their data. The video comes courtesy of Paige Cherny

And here is a screen-grab of that same map as of this evening. 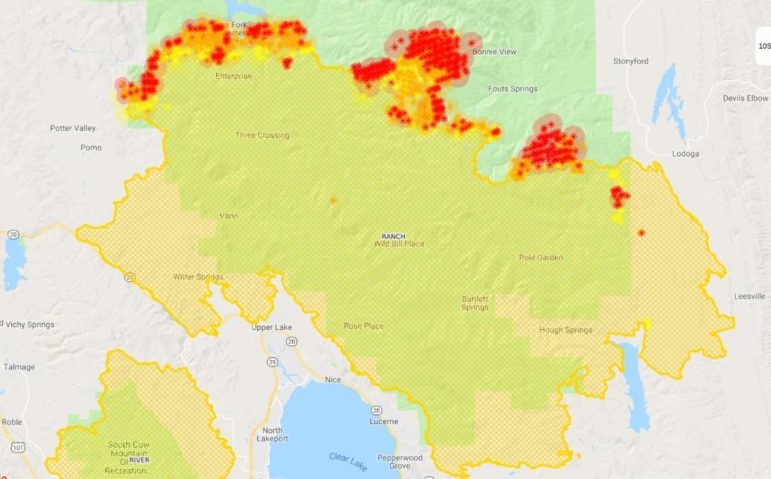 
ORIGINAL
MENDOCINO Co., 8/13/18 — The Ranch Fire has grown significantly since yesterday evening, increasing in size by 8,491 acres to 295,970 as of this morning’s CalFire update — and due to the increase in the fire’s size, containment dropped to 59%. The River Fire has stay the same size, at 48,920 acres, for more than a day, and containment is now 93%. At least 3221 personnel continue to fight both fires in the Mendocino Complex.

The Ranch Fire, which achieved the dubious record of becoming the state’s largest fire in its own right yesterday, remains particularly active in the northwestern portion of the fire, in the Lake Pillsbury area, where winds and fire activity picked up yesterday. The fire moved north towards that area overnight, burning near homes and the dam, and crews are currently on the ground working on structure defense. In this morning’s video update, Bill Steers, of the California Incident Management Team 1 (an interagency firefighting group), noted that the fire was in the vicinity of the Rice Forks area, and that it is still south of the Eel River. He said crews were able to hold it back from the majority of the summer homes in that area, and they are working to control the fire “back around the the southern fork” of Lake Pillsbury.

The fire was also active in the Mid-Mountain Rd. area of above Potter Valley yesterday, but Steers said that although the fire was still on “some tough ground,” there had been some success in cutting off its movement towards the Eel River in that portion of the fire.

The fire has also been active in the Snow Mountain Wilderness area, which has presented challenges for crews trying to establish access points due to steep terrain in the remote area. Crews are working to establish contingency dozer lines in advance of the fire’s possible movement north further into the Mendocino National Forest. There are also plans to do retardant drops along the northwest boundaries of the fire today.

Crews are continuing to work on containing the fire in the vicinity of Lodoga-Stonyford Road and corral its movement back towards the Mendocino National Forest in Colusa County. There are a number of inholdings in the area around Stonyford, and crews are working to prevent the fire from moving east by creating a buffer in the vicinity of John Smith Road, near the site of the Mill Fire in 2012. There will likely be increased smoke activity in that area today as firefighters work to create a buffer zone.

Crews are also working to strengthen containment along the Ranch Fire’s southern boundary.

Since the River Fire has not grown in several days, the focus on patrolling the lines to ensure that the fire suppression methods are holding, and continuing mop-up efforts.

Read more about available resources articles at these links: How to help and resources for the Mendocino Complex; Coping after a disaster; Info and resources for families dealing with wildfire stress; Wildfire smoke and air quality; How to safely clean wildfire ash from your home. And here is our coverage from yesterday: Mendocino Complex update evening Aug. 12: Ranch Fire becomes largest in California history, moves towards Lake Pillsbury — River Fire containment grows.