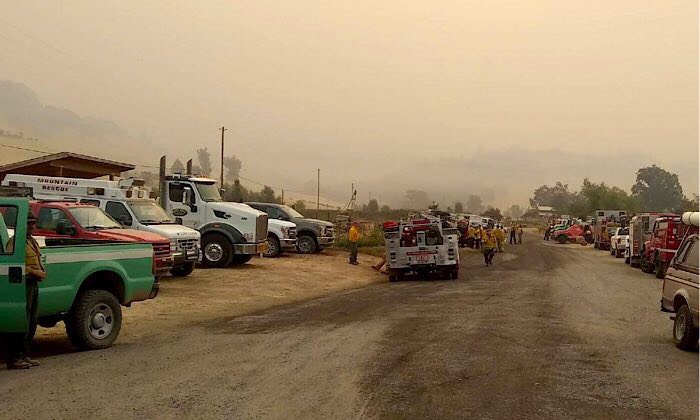 Vehicles from various fire fighting agencies, and others, park along Mid Mountain Rd. in Potter Valley.

A Nixle alert has been issued by the Lake County Sheriffs Department to remind people of the mandatory evacuation in the Lake Pillsbury area. The alert was issued at about 6 p.m. and states:

“A reminder that a mandatory evacuation order exists for the Lake Pillsbury in the Mendocino National Forest area including the Rice Fork Summer Homes area, and everything north to the Lake County line.

An earlier alert, re-issued this afternoon, instructed people to go to the evacuation center at Mendocino College — however, that shelter is closed. There are still evacuation centers open in Lake County, you can get the info by calling Lake Co., OES at 707.263.3450.

The shelter at the Mendocino College is now closed. There are shelters open in the Lake County area. Please call Lake County Office of Emergency Services at (707) 263-3450 for more information.
Animal shelters in Mendocino County remain open. #MendocinoComplex

To begin, there is no new fire danger in the Lake Pillsbury area, and no new evacuation. The area has been under a mandatory evacuation due to the Ranch Fire, for some time. Lake County Undersheriff Chris Macedo, explained to The Mendocino Voice, that though the area has been under evacuation for some time, the fire is now moving to the north and the Lake County Sheriffs Department re-issued the alert to emphasize the danger because many residents of that area have not yet evacuated. He also noted that he also used the wireless alert system, which means that some people in Mendocino County, who are in the cellphone tower area, but not affected by the evacuation, would get the alert. For this reason, he explained, he then called Mendocino County Sheriff Tom Allman, to give him a heads up that some people in Mendocino Co., might be getting the alert, due to the vagaries of cellphone towers.

CalFire has confirmed that there are no new starts, though the fire is still moving north and is closing in on the Lake Pillsbury resort area. Sources on the scene report that the fire has come very close the Eel River.

Mendocino County Sheriff Tom Allman has posted the following on his Facebook page:

There is NO NEW FIRE DANGER NEAR LAKE PILLSBURY! A Nixle alert was sent out by Lake County due to the excessive smoke

As to the condition of the fire, the winds had been blowing from the north earlier today — filling Ukiah with smoke — but shifted around 3:30 p.m. with winds coming from the south beginning to push the fire north, and creating a large smoke plume as well as increased fire activity.

MENDOCINO Co., 8/12/18 — A nixle alert has been sent out by the Lake County Sheriffs Office*. Residents are advised to leave immediately towards the west through Potter Valley, via Elk Mountain Road. There is a shelter located at Mendocino College in Ukiah. The alert mention notes that “Responsive action SHOULD be taken soon (within next hour).”

The evacuation order is for :

*Correction: An earlier version of this article stated that a “new” mandatory evacuation had been ordered. In fact, the order was a nixle alert that had already been sent a couple days ago, and was re-sent this afternoon by the Lake County Sheriffs Department.