UPDATE 8:00 p.m. — CalFire has released a fact-sheet on the fire McNab Fire. Forward progress has been stopped, and fire only got up to 8 acres thanks to the quick work of multiple departments and 102 personel. Containment now stands officially at 20% and crews will remain on the scene overnight extending containment lines and putting out hot spots. An ambulance was called to make an assessment of a heat injury, but no word on the condition of that firefighter.


And here are a few pictures from early into the fire, sent by a reader: 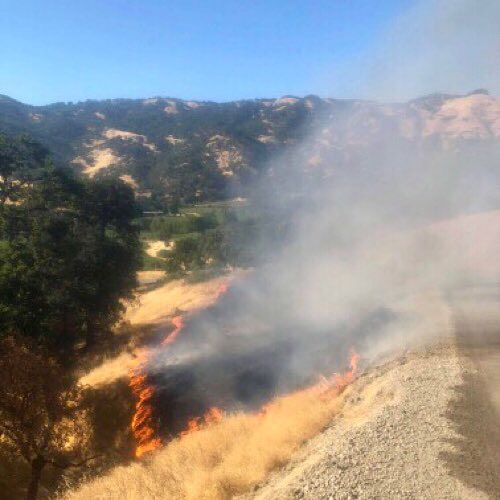 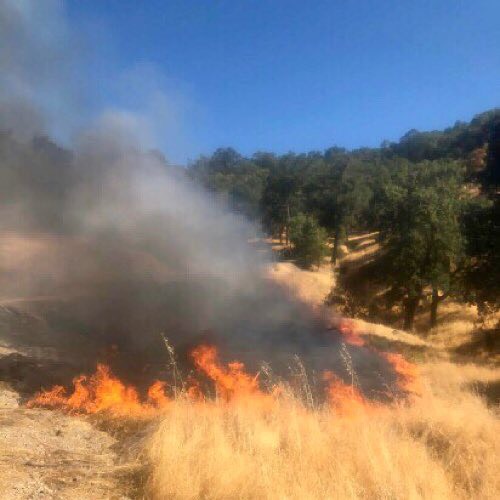 UPDATE 7:00 p.m. — The forward progress of the fire has been stopped at eight acres, though no word on containment. An ambulance has been called to the scene for the purpose of assessing a “heat injury.” The scanner chatter does not indicate a serious or specific injury, just a request for an ambulance to make an “assessment.”

UPDATE 6:50 p.m. — The fire has grown to around 8 acres, and firefighters are making good progress. No evacuation has been ordered. The two air tankers assigned to the fire have returned to the Ukiah Airport on a “load and hold” order, meaning that they remain loaded with retardant ready to go, but on the runway.

UPDATE 6:43 p.m. — CalFire has release two of the air tankers that were dedicated to the McNab Fire, on a “load and hold” order — meaning that they will return to the Ukiah Airport but remain loaded with retardant and ready to return quickly. This is a good sign, but means that they’re not out of the woods yet. The fire seems to have grown to about 8 acres.

Valley View Dr. is closed but no evacuation order, or advisory, is being considered. Currently 8 engines, 2 tenders, 1 copter, 2 hand crews, 3 dozers and about 100 personel are dedicated to the fire.

For more info scroll down. Here’s a video from a reader, Jessica Farfan, taken from just off Hwy. 101, facing west:

UPDATE 6:25 p.m. — More resources continue to be devoted to this fire, with a few departments now responding. It appears that structures remain threatened. CalFire’s map, from their Twitter, shows the map centered located at about the intersection between NcNab Ranch Rd. and Valley View Dr. Or about a quarter mile south of Bonterra Winery, and McNab Ridge Winery. There is a main fire and a smaller spot fire on the other side of Valley View Dr.

UPDATE 6:15 p.m. — The main fire has grown to about 5 or 6 acres with a spot fire across Valley View Dr. at about half an acre. Firefighters are reporting that they are making good progress. However, CalFire is reporting that structures are threatened.

MENDOCINO Co., 7/26/18 — A vegetation fire has broken in the McNab Ranch. So far all we know is that’s it’s about 5 to 6 acres and that CalFire and Hopland Fire are on the scene. It sounds like other departments are also responding.

#McNabFire Initial Report: 1/2 acre of vegetation in the McNab Ranch area, near the town of Hopland. CAL FIRE & Hopland Fire at scene. pic.twitter.com/mRzKqeEPQW