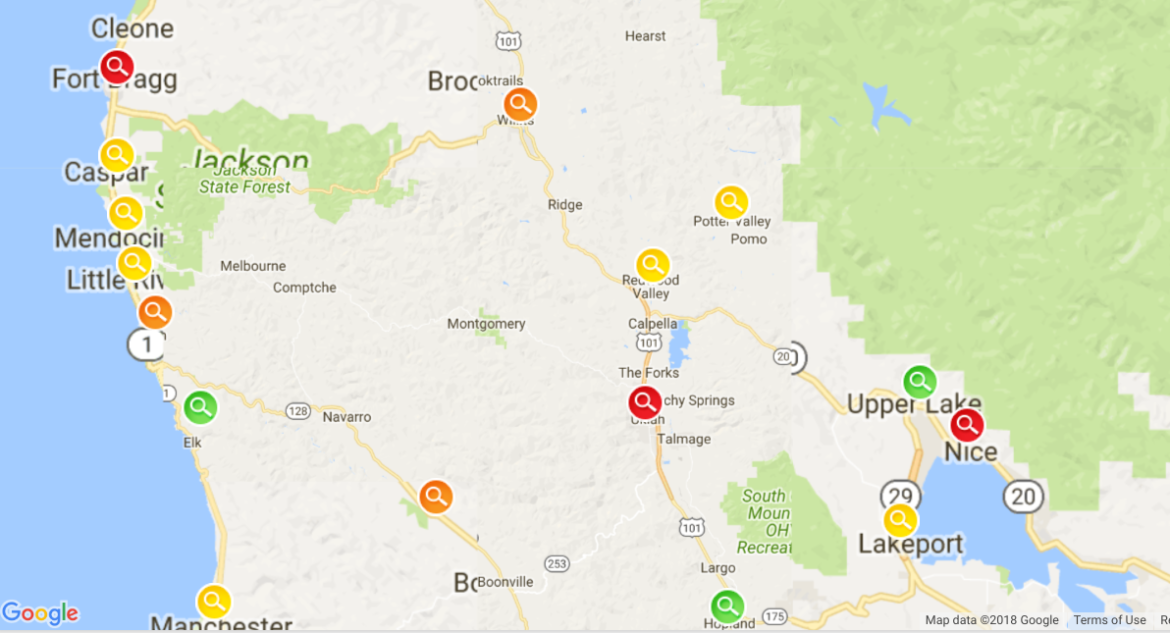 UPDATE 3:15 a.m. — And we’ve got power in Willits. We’d like to thank Senator Mike McGuire for being a font of information in a literal blacked out, midnight, power outage. And of course we’d also like to thank the PG&E workers and firefighters who restored power in what must’ve have been very difficult circumstances so that we can have our street lights and night lights and alarm clocks in the wee hours.

And we also hear reports that Redwood Valley and parts of the coast are back.

And with that the Mendo Voice is signing for the night.

UPDATE 2:20 a.m. — People in Ukiah and Senator McGuire’s Twitter feed are informing us that the power has been restored to most of Ukiah. A large part of the county remains without power.

We’ll continue updating for a time, but may have to sign off around 3 a.m.

UPDATE 12:00 a.m.  — Senator McGuire’s office has informed us that PG&E is now saying that they have determined that the outage was caused by heavy smoke around transmission lines, and that apparently heavy smoke is a conductor of electricity. They added that “there continues to be significant fire activity, south of Blue Lakes, on Hwy. 20.” PG&E crews are working on the situation.

A spokesperson for PG&E, Karlyn Hernandez, contacted us just before midnight and made a couple additions. She indicated that the number of people without power is closer to 50,000, and that the power shut off was not, in her words, a “pro-active public safety power shut-off,” that is, they did not de-energize the line to avoid a problem. She did not provide a cause of the fire, and instead said that PG&E did not yet have a cause.

The Mendocino Voice’s resident electrical engineer, reached by phone (and roused from bed), confirmed that indeed if smoke becomes thick enough the carbon particles in that smoke can begin to act as a conductor and create electrical arcs. In addition, if a heavy enough coating of carbon soot coats high power insulators, it can create problems.

Eye-witness reports also report seeing fire and smoke burning dangerously close to high-powered transmission lines that feed Mendocino and Lake counties, and report seeing explosions at those lines in the wake of the smoke.

We’ll continue to update as info comes in.

UPDATE 11:40 p.m. — California State Senator Mike McGuire, speaking from Lake County, has put in a call to us describing the information he has. McGuire has spoke to representatives from PG&E and provided the following: 36,000 people are affected by this outage from the Mendocino coast to Clearlake.

As to the possibility that PG&E may have de-energized a large transmission line as part of fire fighting activities, McGuire explained that when such actions are taken it is generally at the behest of a local fire department or CalFire.

McGuire add, “Mendocino and Lake County residents have suffered through a lot over these past several months and this is a significant inconvenience — what I can assure you is PG&E representatives are working hard to determine the cause of the outage and provide time for the fix.”

ORIGINAL
MENDOCINO Co., 7/28/18 — A massive power outage has hit Mendocino and Lake counties, extending all along the coast from Westport, through Fort Bragg to Elk, and inland from Willits through Ukiah, and east to the northern parts of Lake County. The outage began just before 10: 30 p.m. and as of 11:25 p.m. PG&E had not responded to requests for comment nor provided information about this power outage.

So far we’re about in the dark as you are, putting together this article from the parking lot of the Ukiah Denny’s. There is a major set of transmission lines that runs from Lake County into Mendo, where the fires have been active. PG&E has also been known to shut down the lines because of fire risk or over use. It is not clear which is happening. After about 45 minutes on hold with the PG&E media we have still not gotten through to a spokesperson. It’s now been about an hour since the outage an no word from PG&E on the cause or when the power will be back on.

We do know that local hospitals are running on back up generators, and the CalFire incident command center also has generators.

We’ll be updating as information comes in.