MENDOCINO Co., 6/7/18 —  A vegetation fire has broken in the brush next to the the train tracks, behind the Walgreens on Perkins St. in Ukiah. The fire started at about 3:25 p.m. and is covering that section of Ukiah in smoke. Firefighters are on the scene responding but traffic will be impacted on Perkins St. Smoke is currently visible from Main St. in the general area and if you can avoid the area, that might be a good idea to allow responders more room.

As of about 3:38 the smoke has died down substantially. The fire appears to have been burning in high grass around the railroad tracks, which makes for lots of smoke quickly. However, firefighters now have the situation well in control.

Traffic is being diverted from Perkins St. to other streets. 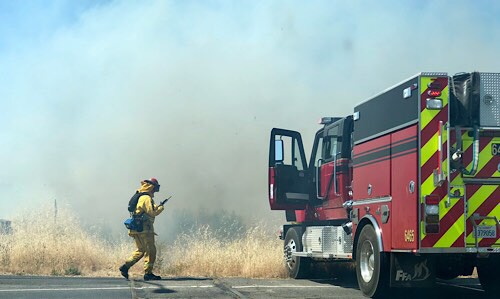 No word yet on what caused it.