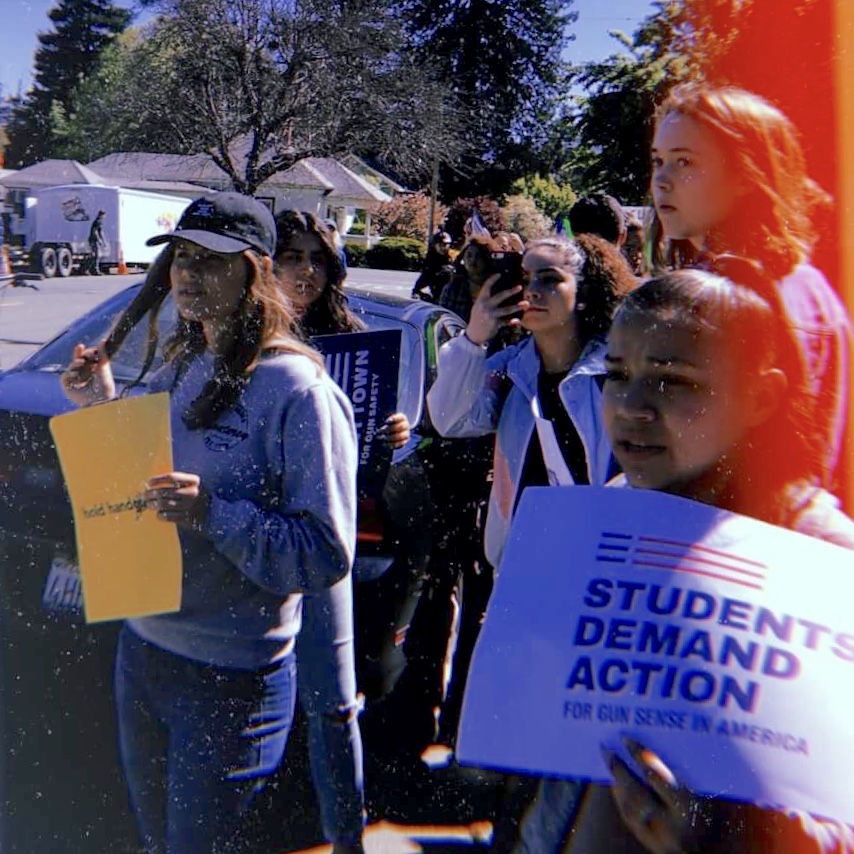 UKIAH, 4/25/18 — Last Friday, over a hundred Ukiah High students gathered on the Mendocino courthouse steps to express their views regarding gun violence. With megaphones in hand, speeches, both prepared and improvised, echoed across downtown Ukiah, voices filled with emotion calling for action.

On April 20th, students across America walked out of their schools in and event dubbed the “National School Walkout,” a series of demonstrations to protest gun violence, promote school safety and to recognize the 19th anniversary of the Columbine shooting. The protests come in the wake of the Parkland shooting, which has galvanized political action around the county. Locally the students at Ukiah High and other area high schools have staged protests along these lines in recent weeks.

Ukiah High students walked out of school at 10 a.m. and, escorted by adult volunteers, walked to the courthouse to demonstrated on its steps. The walkout and protest was organized by students Juan Gonzalez, Gracianne Kirsch, and Caramia Putman. The protest lasted from 10:00 a.m. to 3:15 p.m.

For hours, participants shouted slogans like, “Show me what democracy looks like.” In general, bystanders showed support. Participants did describe some negative reactions including a passing truck purposefully spraying exhaust at the protestors. The protestors simply responded with “Peace and Love.”

Not all Ukiah High “Wildcats” walked out. When asked why she chose to stay at school, 11th grader Ayled Zazueta said, “Teachers give out quizzes on Fridays so I couldn’t risk missing those tests.” Senior Jesse Boyd spoke to why he stayed at school, “I didn’t feel motivated anymore. It had been at least a month since the most recent shootings.”

April 20th is infamous for many reasons, including the Columbine Massacre. The day is also recognized across the nation as a holiday for marijuana. Many adults and students voiced concerns that the day’s walk-out was merely an excuse to get out of school and get high. However, participants of the walkout were told by organizers that there would be. “No violence, drug use, or other disruptive activity.” When presented with these concerns, one of the students who walked out stated, “If I wanted to smoke weed, I wouldn’t go to the courthouse.”

Editor’s note: This article was reported and written by a team of high school student journalists, with direction from their teacher Matt LaFever, and some edits and notes from the staff of The Mendocino Voice.

Though we stand by the first hand reporting in this work, please remember that it is the work of young people who are getting their first shot at journalism.