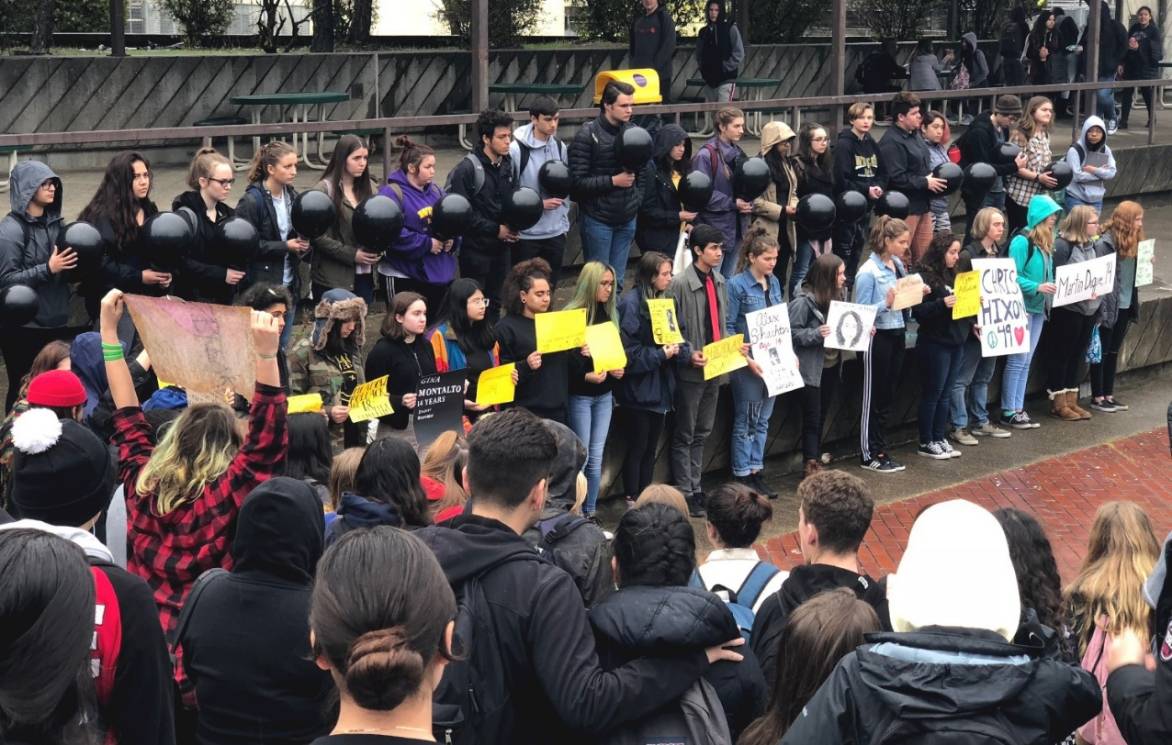 The "tri" at Ukiah High during the recent walkout.

Editor’s note: We’re excited to publish our first collaboration with the students of the Ukiah High School journalism program, who publish The Ukiahilite. This article was reported and written by a team of high school student journalists, with direction from their teacher Matt LaFever, and some edits and notes from the staff of The Mendocino Voice.

Though we stand by the first hand reporting in this work, please remember that it is the work of young people who are getting their first shot at journalism. In your comments be considerate and encouraging, and remember that they are learning.

UKIAH, 3/15/18 — Over 250 students at Ukiah High School joined their peers around America, yesterday, in a walk out to memorialize the students who died in the Marjory Stoneman Douglas High School Shooting in Parkland, Florida. Hundreds of young people walked out of their second period class at 10 AM, March 14, and stayed out for 17 minutes: one minute for each student who died at Parkland.

Despite size of the crowd, for seventeen minutes no one made a sound, maintaining complete silence. Indigo Funk, a student who attended, said, “The turnout was incredible, the entire tri [the central plaza at Ukiah High] was filled with people and everyone was silent.” 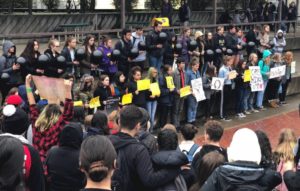 The “tri” at Ukiah High during the recent walkout.

The walkout was part of a nationwide response to the shooting in Parkland. Wednesday’s walkout is just one of a few planned for the next couple months. A “March for Our Lives” in Washington D.C. and other cities is planned for Saturday, March 24, including Ukiah where it will be from 11a.m. to 1p.m. at Alex Thomas Plaza. Additionally, students plan to walkout at 10 a.m. once again on April 20 — this time for the entire day. The same group of Ukiah High students are already working on plans for April.

When the walkout was first being planned, organizers predicted that it would be much smaller in scale. Ukiah High has roughly 1600 students. “At first we only had 40 students that were interested. We never thought there were going to be more than those 40,” said Juan Gonzalez, one of the main organizers. It ended up being six times larger than that, with over 250 students and staff joining the vigil. 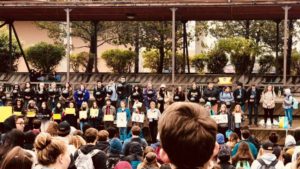 In the past few weeks Parkland students marched to the state house in Florida. In the wake of this activism, Florida lawmakers raised the age to purchase firearms from 18 to 21 and now require a three-day waiting period for long guns as well as hand guns. Now, youth are trying to spark change at the federal level. Students walked out in cities including New York City, Chicago, Atlanta, and Santa Monica, voicing their discontent over the Parkland incident through an array of methods. In Atlanta, students kneeled, while those in New York chanted at Columbus Circle, Lincoln Center, and Trump Towers. Thousands of Washington D.C. students marched to Capitol Hill shouting “Hey-hey, ho-ho, the N.R.A. has got to go!”

On Tuesday, the Ukiah High was buzzing with word of the walkout — with students wondering what teacher’s reactions would be, whether they would be congratulated or disciplined for participating. English teacher Brad McClanahan said, “I told [the students] that if they all left I would go with them, but if some of them stayed behind I would stay with them because it’s my job to be a teacher in the classroom.” Some teachers gave students “cuts” (an unexcused absence) while others let their students go without consequence.

The walkout went off without any disturbance. When asked about the event’s impact, Funk said, “I thought the walkout was very powerful, I was very impressed that no one at all started messing around or horsing around.” McClanahan stated, “My whole second period class left.” A few teachers were visible in the crowd, standing with stoic faces. Most students looked the same, although some were seen with silent streams of tears.

When asked about the purpose behind the walkout, central participant Susy Correa said, “Our generation needs to be the catalyst for change, sure there have been protests and different rallies and we’re getting riled up, but every voice counts and even if you’re the only person standing, do it, stand in the crowd of sitting people.” Susy Correa was one of the seventeen students standing in the center of her peers, holding a sign with the name and age of a Parkland victim. Each sign was made by the hand that held it. Behind them were seventeen others holding black balloons. All the participants were unaffected by the sound of school bells ringing for class and break. The select seventeen stood motionless through the event and the event finished as it began: in complete and utter silence. But this time students were embracing one another.