UPDATE 4/7/18 11:30a.m.— Caltrans crews worked through the night on Hwy. 1, and and were able to clear the slide from  west of Leggett and re-open the road. Currently, only the 128 remains closed from mile marker 0 (the intersection with Hwy. 1) and mile marker 11. However, as of this morning, Caltrans is reporting that the river appears to have crested and the water is receding. 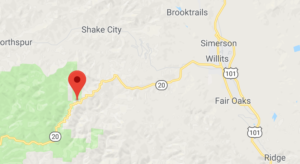 Location of the downed tree on Highway 20, both lanes blocked as of 8pm.

There is also a log in the road on State Route 20 at the Caspar bridge in the southbound lane.

Earlier this afternoon, a vehicle went off the embankment on State Route 20, and responders may still be in the area retrieving the vehicle. Another vehicle collided with a guard rail near the Ridegwood grade south of Willits. Drivers are advised to take caution on the roads as emergency responders and road workers are on the roads responding to storm conditions and collisions.

UPDATE 4p.m.: Hwy. 1* is closed in both directions, about 12 miles south of Leggett, between Leggett and the coast, due to debris and fallen trees. CalTrans announced the closure at about 3:30 p.m. and does not have an estimate for when it will reopen.

*Correction: CalTrans public information initially misidentified the highway that was closed, announcing that the 101 had been closed. The 101 is NOT closed. CalTrans has now confirmed that it is instead Hwy. 1 that is closed.

Here’s some photos of the slide provided by Caltrans. More road conditions are below.

ORIGINAL
MENDOCINO Co., 4/6/18 — A flood watch is in effect for low-lying parts of Mendocino County from now through Saturday evening due to a torrential spring downpour bringing inches of rain to our region. Aside from the potential for flooding and landslides, the wet weather has also resulted in several car accidents around the area. State Route 128 is currently closed at the intersection with Highway 1, and there is a warning issued for landslides and debris flows in the area of the Redwood Fire burn scar.

The Mendocino County Sheriff’s Office shared a warning from FEMA this morning about the possibility of flooding due to heavy rains throughout the area, especially in northern Mendocino and southern Humboldt counties. Small streams may quickly see water rise past their banks with fast moving water, and both rural and urban roads may also flood. Three to four inches of rain are predicted, with up to seven inches possible in higher terrain. Winds are expected to pick up this evening, and snow levels on Sunday may drop to 4,000 feet, and people are reminded to turn on their headlights and take caution when driving. The county’s Department of Transportation will be patrolling throughout the night on Friday, but residents are advised to contact them at 707-463-4263 to report flooding or road incidents.

The Russian River near both State Route 128 and State Route 175 have the highest potential for flooding, and the 128 is currently closed between mile marker 0 and mile marker 11. There is also a significant potential for flooding, landslides, and debris flow in the areas of the Redwood Fire burn scar. Residents living in the area are advised that conditions may change quickly.

Here’s some info below about the current conditions. Is it flooding where you are? Send us your info and photos and we’ll keep everyone updated.

Here’s a warning from the Mendocino County Sheriff’s Office:

Here’s a press release from the Mendocino County Office of Emergency Services concerning flooding and debris issues in the Redwood Fire Complex areas:

Synopsis:
Today (4/6/18) through Sunday (4/8/18) forecast rainfall amounts in the Redwood Fire burn area may be significant enough to cause localized landslides, debris flows, or flooding in some areas of the burn scar. Residents are urged to monitor conditions in their area for potential risks to property and life safety. The National Weather Service is not forecasting major debris flows, landslides, or flooding at this time, just localized issues.

The National Weather Service is currently forecasting that the most significant rainfall rates will be tonight (April 6, 2018) into tomorrow morning (Saturday April 7th). At the time of this release, the National Weather Service has a Flood Advisory and Watch Flood for portions of Mendocino County stating that “Small streams will become swollen and fast moving. They may exceed their banks and cause flooding. Low lying areas and both rural and urban roads may also flood.”