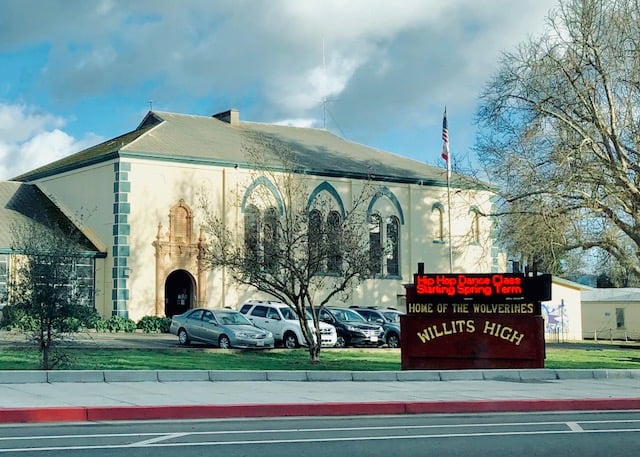 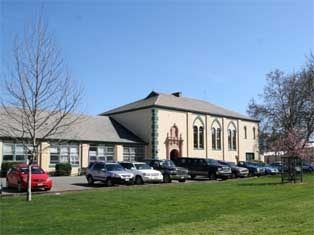 *para leer en español haga clic aquí.
WILLITS, CA, 2/22/18 — Willits High School experienced a school-shooting scare overnight when rumors began to spread on social media that a student at Willits High School had made threats related to a possible school shooting. Those rumors were confirmed in a Facebook post made by Willits Unified School District Superintendent Mark Westerburg around 10pm. In a follow-up post made this morning, Westerburg stated that the student who had made the threats had been taken into custody by the Willits Police Department, though he noted that Willits High will remain on high alert today, “to show the seriousness of any situation like this and to show students we are 100% dedicated to their safety.”

The Willits Police Department also confirmed in a Facebook post, made around 7am, that the student had made a threatening comment, “not a direct threat, just some words that were of great concern,” and would be in custody “for some time.” Superintendent Westerburg told The Mendocino Voice in a phone call around 8:30am that the student had made the statements while in class and had left the school of his own accord, during school hours, before being found and taken into custody by the WPD. Said Westerburg, “The student made some comments in a classroom, but didn’t threaten the teacher or the students in any way, the student left the premises on their own.”

After the student left the classroom, Westerburg explained, “based on that we called the police and the guardians immediately, and the police picked him up last night and put him in custody — not for the incident that happened in school — they took him in custody for other issues that were also going on.” He added, “This is an issue of a young man with lots of issues who said something inappropriate and took off on his own accord.” He said that both the police and “other agencies” had conducted the search for the student, and that no weapons had been found.  “Those are issues that are going to get resolved somewhere besides Willits Unified.”

Westerburg said that due to the student’s age he couldn’t provide further information about exactly what happened, or any charges, pointing out that as a minor the student has special protections about information being shared. He said that the school would determine what disciplinary actions were necessary after the student was released from custody. Westerburg elaborated that the student had made no specific threat, but a general comment, and stated the students were never in jeopardy. He noted that all California schools are mandated to practice lock-down drills, and but did not believe one had recently occurred.

Asked about the the district’s response to the rumors and agitation that spread quickly on Facebook Wednesday evening Westerburg said, “You can’t keep up with Facebook.” He elaborated that, “This is just one of many incidents throughout Facebook that get out of control…that’s the unfortunate nature of Facebook.” He compared the situation on Facebook to the old children’s game of telephone, in which a message is garbled by repeated retelling. He further noted that, “We try to contain the message as best we can, but I don’t control keyboards for folks.”

Westerburg went on to lament the national hype around school shootings that he attributed to the media, saying that whenever such shootings occur, schools across the country have to deal with heightened fears, and threats for weeks. He said, “It’s just an unfortunate response to a national tragedy, and as I said I’m sure there are many schools dealing with similar issues.”

Westerburg also stated that robo-calls (an automated calling system that can mass call parents) had gone out around 9pm on Wednesday night and again around 7am on Thursday morning, although many parents on social media only reported receiving the morning. Multiple people said that rather than receiving one call at night and one in the morning, they instead received several calls in a row this morning. Westerburg said he did not know if any robo-calls went out in Spanish — the district did not make any social media comment in Spanish. Quite a few of the parents of Willits High students primarily speak Spanish.

Across social media parents questioned why they had not received calls sooner despite having regularly received robo-calls about bus changes or weather closures in the past. District staff were informed of the situation through and email on Wednesday night. The email apparently contained instructions not to post about the situation on social media, nor to discuss with press.

The rumors began circulating on Willits-focused social media groups on Wednesday evening, after a parent posted that her child had informed her of a potential threat from a student, and that she had verified the information in a call with the Willits Police Department, which confirmed they were aware of the incident.

The post quickly spread with many concerned parents sharing information from their own children, wondering what the nature of the threats was, and whether the student who had made them had been placed in custody. Many also voiced frustration that the first information they received was on Facebook, not through an official statement from school — point out that not all parents have Facebook or and that many people do not check it late at night.

Several people commented on Facebook that they had been roused from bed with the information, either by their own children, or other friends and relatives. Several students commenting on Facebook also expressed fear about attending school in the morning, with many parents claiming that they would not be allowing their children to attend Willits High on Thursday in light of the threat.

At around 10pm on Wednesday evening, Superintendent Westerburg posted a statement on the official Willits Unified School District Facebook page confirming that a threat had been made by a student, who had been “removed” from school and that the incident had been turned over to the WPD.

Several students also voiced their worries on Facebook about both the potential threat and the way it was being handled. One student wrote, “The fact I have to worry more about missing my AP class work than my life is appalling.” A student at Willits Charter School wrote, “My friends and neighbors are at risk. This should have been posted HOURS ago not at 10pm. I trust you guys but I need to be informed this affects not only the high school but all the schools.”

Westerburg stated in his evening post that the school, “will have our school safety plan in place for the morning to ensure a safe and normal day of school,” causing many parents to express confusion about what exactly the safety plan might be, noting that they were unaware of any plan or drills to help the students understand how to protect themselves if a school shooting were to occur.

In the interview Westerburg explained that, “[The safety plan is] that all the teachers and staff have been notified, people are at their doors, we had people at the parking lots, the police were present at the school. We were on guard, and we’ll stay on guard…today we’re more sensitive, more in tune, that includes maintenance people, and bus drivers…We notified every single staff member.”

Just over a week ago, in Parkland Florida, a school shooter killed 17 people, most of them students, in a rampage that has set off a national conversation about gun control, and placed many of the country’s students and parents on edge. Just in the past few days there have been at several threats of school shootings across the nation. In Whittier, in Southern California, a 17 year old student was arrested for making a threat, which led to the discovery of a cache of weapons at his house. And in Long Beach, two students were arrested in separate, unrelated threat incidents.

John Haschak, the current Willits Teachers Association president, and a candidate for District 3 supervisor, confirmed that he had received the staff email on Wednesday evening but could not provide additional details or specifics on the Willits High incident. Speaking in general, Haschak noted that, “Safety has to be foremost, in this time of the Parkland shooting…we need to get this country under control, no one should be able to have any kind of weapon of mass destruction, of assault weapon, it’s just ridiculous…We’re heroes in educating our children, it shouldn’t be that we’re the front lines of this assault on our students. It’s very unfortunate that that’s the predicament that we’re in right now.”

Vice Mayor of Willits Saprina Rodriguez wrote in a Facebook post: “Thank you Willits Police Department and Willits Unified. Parents have had a stressful night. We’re glad the suspect was taken into custody.”