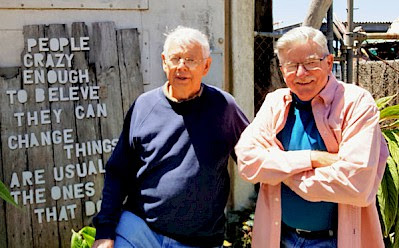 John Whitcomb and Dennis McCarthy, photo from the Community Foundation of Mendocino County.

MENDOCINO CO., 1/26/17 — A new performing arts scholarship has been created to support high school students in inland Mendocino County with achieving their dreams of working in the performing arts. The money is available for “students graduating from a high school in Anderson Valley, Ukiah area, Willits, Leggett, Laytonville, or Round Valley who are serious about pursuing a career in the performing arts, including music, theatre, dance, film, puppetry, and related technical fields such as sound, lighting, set and costume design.”

John Whitcomb and Dennis McCarthy, photo from the Community Foundation of Mendocino County.

The fund was started by John Whitcomb and Dennis McCarthy, former pear farmers who were inspired to create the McCarthy and Whitcomb Inland Performing Arts Scholarship Fund in coordination with the Community Foundation of Mendocino County due to their lifelong appreciation of the arts.

Applications to the fund opened on January 18 and will close on April 6, 2018. The Community Foundation also administers a variety of different student scholarships, which you can check out here.

Here’s the full press release about the McCarthy and Whitcomb fund, and you can read more about the fund here.

A Language of the Heart

John Whitcomb and Dennis McCarthy, who recently opened the McCarthy and Whitcomb Inland Performing Arts Scholarship Fund, are well aware that they have had their share of good fortune. “I came from a wonderful, loving middle class family,” John recounts, “and we have had good luck over the years.”
Of course, their lives have been built on more than good luck. As pear farmers for decades, Dennis and John were no strangers to hard work and perseverance. But when the time came to think about “giving back,” they both realized that one of the things that has given them the most joy over the years has been an appreciation for the arts.
John remembers that he and his mother went to the fine arts theatre to see foreign films when he was just a boy. “It was just the two of us, and it made a big impression on me.” He also remembers early impressions of the organ music at the Episcopal Church in Rochester, NY. In high school, he was grateful for his English teacher, Dolores Hart. “She knew how to use literature to instill a spark. Reading The Glass Menagerie made a lasting impression. I went on to be active in a readers’ theatre and played Puck in A Midsummer’s Night Dream. I could really fly around on stage.”
Dennis also was raised in an environment where the arts were an important part of everyday life. “My father died when I was young, and we moved from Bakersfield to Los Angeles to be with my mother’s family. My grandparents were immigrants from Hungary and they had many artistic friends who were involved with the movie industry.”
An appreciation for the arts continues to be a part of their lives. “We spend many evenings listening to music,” says John. “We have a great collection that includes all genres.” They also enjoy attending local theatre productions and note that Ukiah has “an impressive array of talent for a small community.”
The idea to open a scholarship fund for students interested in the arts came to Dennis while reading the Community Foundation‘s annual report. “I ran across a description of the Jerry Juhl Fund for the Arts and noticed it was focused on kids on the coast. I wanted to expand it inland.” The McCarthy and Whitcomb Inland Performing Arts Scholarship Fund is intended for students graduating from a high school in Anderson Valley, Ukiah area, Willits, Leggett, Laytonville, or Round Valley who are serious about pursuing a career in the performing arts, including music, theatre, dance, film, puppetry, and related technical fields such as sound, lighting, set and costume design.
Avid newspaper readers, John and Dennis appreciate stories about the outstanding young people in our region and are looking forward to helping some of them reach their goals. John says, “Kids should have the opportunity to build their lives on choices. They should not be prevented from following their dreams based on financial considerations.” Both men are also convinced of the vital importance of the arts in today’s world, noting “All the technology and artificial intelligence need a counterbalance. The arts represent our roots and our common language. It is a language of the heart and it never dies.”
The 2018 Community Foundation Scholarship Program opened on January 18 and will close on April 6, 2018. To review guidelines for the McCarthy and Whitcomb Inland Performing Arts Scholarship, visit Community Foundation Inland Scholarships. To explore our 25 other scholarship funds, visit  Community Foundation of Mendocino County Scholarship Program.