Initial location of the fire from CHP

UPDATE 3:20pm, 9/19/17 — The Grape fire has spread to about 100 acres, and crews are attempting to stop progress “west of Highway 101, east of Crawford Creek, north of Crawford Ranch Road,” according to scanner traffic. One responder on the scanner reports that “conditions look favorable,” and that “most of the fire is holding in retardant,” but that frequent spot fires are “burning back up the ridge.”

Crews a equipment on the scene include: “8 aircraft-12 Engines-4 Crews-4 Water Tenders-8 Chief Officers-2 Dozers,” according to Cal Fire’s update at 3:15 pm.

Photos and video and additional info can be found below and photos from readers can be found on our Facebook page.

UPDATE 3PM, 9/19/17 — The fire is now 100 acres but forward progress has been mostly stopped, according to scanner traffic. The air attack continues, we’ll update with more info as it’s available. The fire is now being managed by a Cal Fire incident commander and additional updates can be found here on the Cal Fire page.

UPDATE 2:20PM, 9/19/17 — Crews are responding to the scene from around the county, including Ukiah Valley, Laytonville, Leggett, and other departments, according to scanner traffic. Air tankers may be sent from Redding to assist with the response. Scanner traffic indicates at least three tankers are fighting the fire as of about 2:15pm.

The Highway 101 southbound “slow lane,” also called #2, is closed near mile marker 14, where the road changes from one lane to two to allow passing. The CHP incident page calls this a “hard closure” and right now that lane is expected to be closed for at least 10 hours.

Here’s a video and some photos of the scene from reader Amber Paz, more photos from Jonathan Beck below, and the original post. Cal Fire and CHP in Ukiah are sharing updates, CHP is also posting videos from the scene. Additional photos can be found on our Facebook page, we’ll update as more info becomes available. 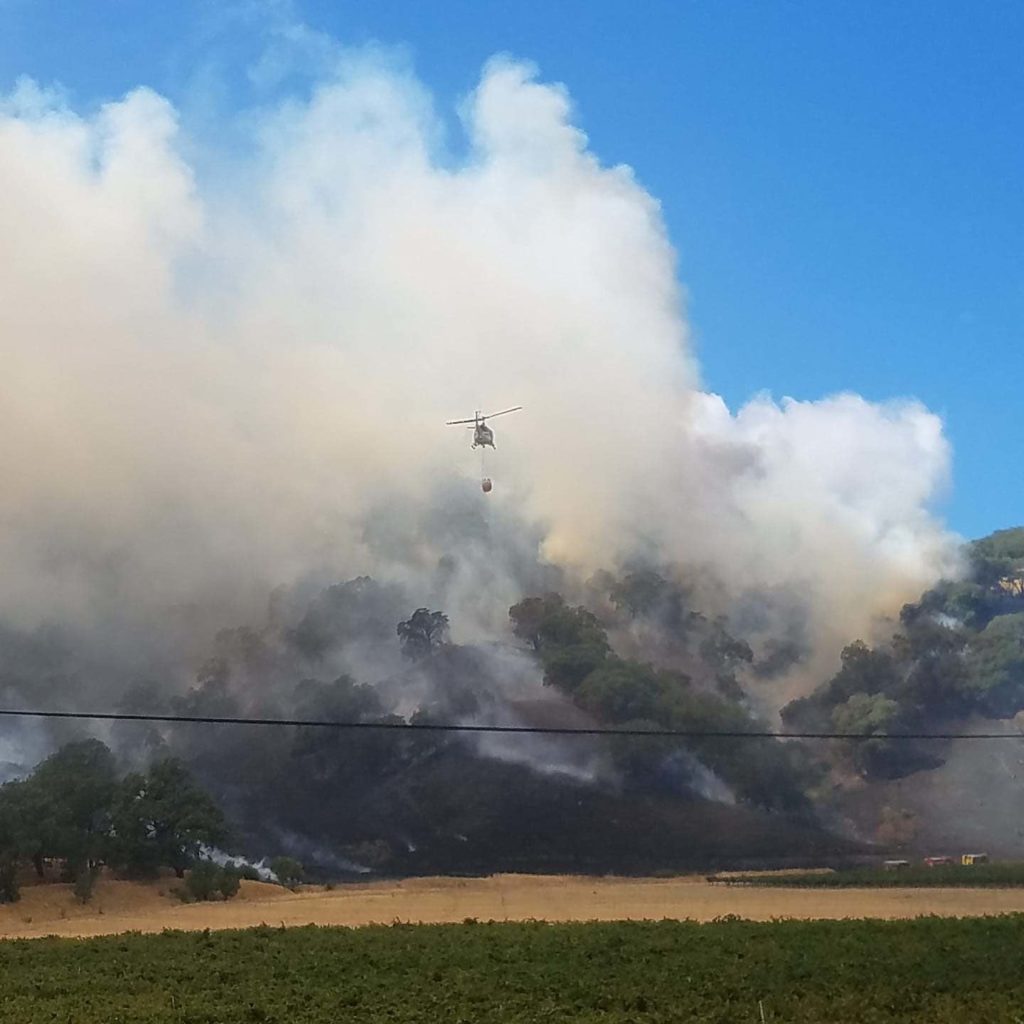 ORIGINAL: MENDOCINO CO., 9/19/17 — A one acre vegetation fire has started near Hopland and may be impacting traffic on Highway 101. Cal Fire and Hopland Fire are responding to the blaze, which is being called the “Grape Fire,” and an air attack is underway, with more resources being requested from fire stations around the county.

As of 1:30pm the fire is reported to be 40 acres in size and two structures are threatened. The fire began around the intersection of Highway 101 and Largo Road near the Jaxon Keys Winery and Distillery, acccording to the CHP. You can see the incident report and location below.

Initial location of the fire from CHP

The southbound lane “# 2” may be closed to allow fire crews to access the blaze, which is located around mile marker 15 in Hopland, according to the California Highway Patrol incident page.

Readers are reporting smoke clouds are visible from south of Willits. We’ll update as more information is available. You can see some more photos of the blaze from Kym Kemp here. 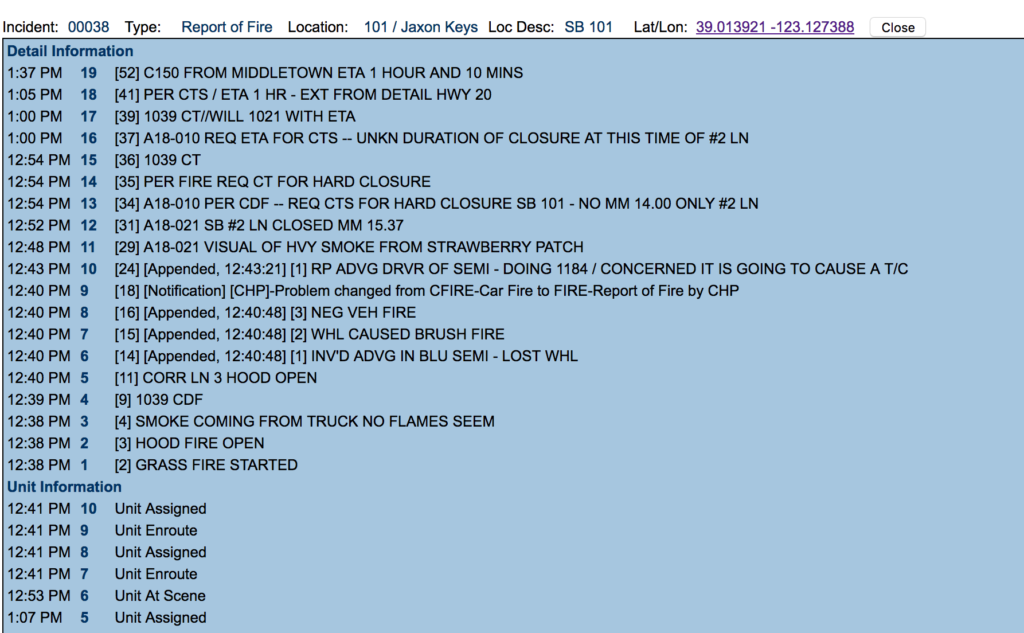 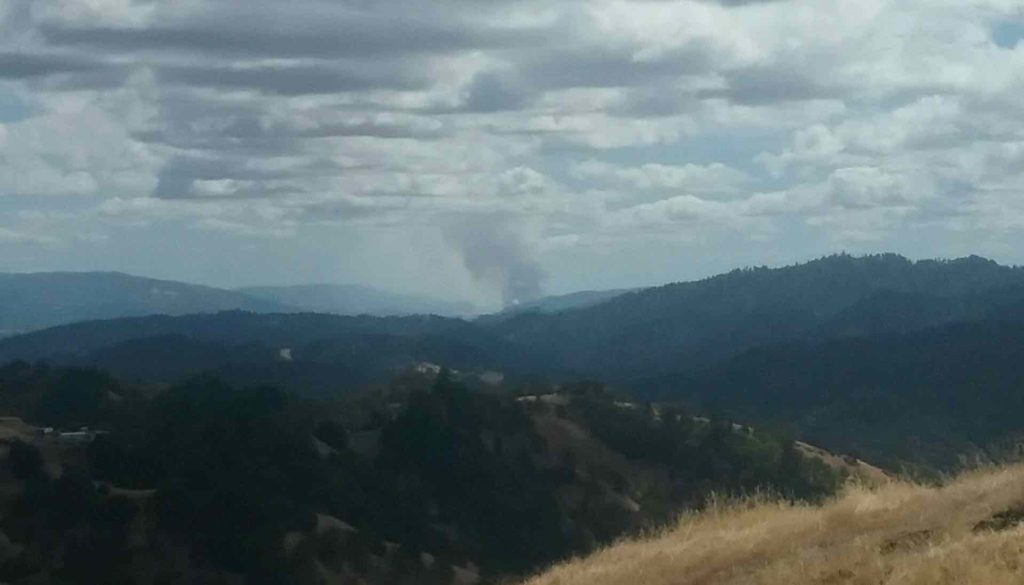 smoke from the Grape Fire in Hopland visible from Blackhawk Drive south of Willits, from a reader