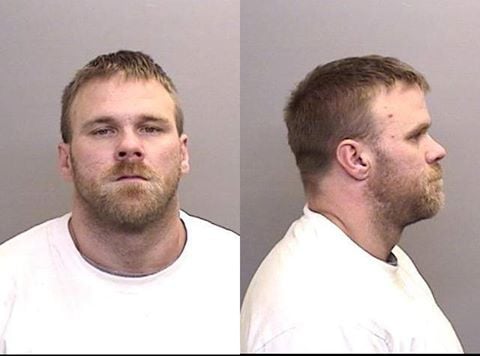 Trevor Jackson, from the MCSO

MENDOCINO Co., 8/1/17 — The Mendocino County Sheriff’s Office (MCSO) has put out a BOLO (be on the look out) for a man that was allegedly involved in a recent weed robbery in Covelo. On July 16, Trevor Jackson and accomplices, allegedly posed as law enforcement officers in an early morning attempt to steal a Covelo resident’s cannabis crop. The victim fled, contacted the MCSO, and a manhunt occured. Today the MCSO released new information via Facebook

BE ON THE LOOKOUT (BOLO)

Trevor Jackson is wanted on a $500,000 felony warrant for an armed robbery that took place off Hwy 162 on July 16, 2017 at approximately 2:30 a.m. Jackson has been identified as the “ring leader” and the one who planned the entire robbery. Jackson is being sought by the Mendocino County Sheriff’s Office Detective Bureau.

If you see him DO NOT APPROACH HIM. Jackson should be considered armed and dangerous based on information known to investigators.

For some background here is the original press release issued by the MCSO on July 17, 2017:

Synopsis: On 07-16-17, at about 2:33 AM, a subject called 911 to report that numerous armed subjects had just come onto his remote, rural property in several vehicles claiming to be law enforcement officers. Based on their appearance and demeanor the subject recognized that they were not law enforcement officers but were actually there with the intent to steal his marijuana crop. The subject fled to call 911, after suspects fired, and he believed that another resident was hiding on the property.
Mendocino County Deputy Sheriff’s were nearby and contacted the subject on Hwy 162, where he described what happened and the vehicles involved. The Deputies drove to the property where they encountered a truck matching one described by the victim. Upon seeing the deputies the vehicle attempted to flee, driving just out of sight and stopping. Deputies subsequently searched the vehicle, locating firearms and stolen property, but no suspects.
The other resident was located, unharmed, and said that he had been contacted at the house by 5-8 men wearing ski masks, armed with firearms, claiming to be law enforcement officers. These subjects questioned the victim at gunpoint about the location of valuable items and people on the property and forced him into a truck, threatening to shoot him if he did not comply. The subject was robbed of his personal belongings and forced to assist the suspects as they stole marijuana plants. The subject was released when the suspects drove away.
Deputies at the scene requested the assistance of the Mendocino County Special Weapons and Tactics team (SWAT) to assist in searching the wooded remote area for the armed suspects.
At about 11:00 AM three suspects were located and arrested without incident. All three suspects, Daniel Hernandezsanchez, Matthew Sturges, and Alejandro Nunez were lodged at the Mendocino County Jail for the listed charges with bail set at $150,000.00. The incident remains under investigation and anyone with information is requested to call (707) 234-2100or e-mail to [email protected].