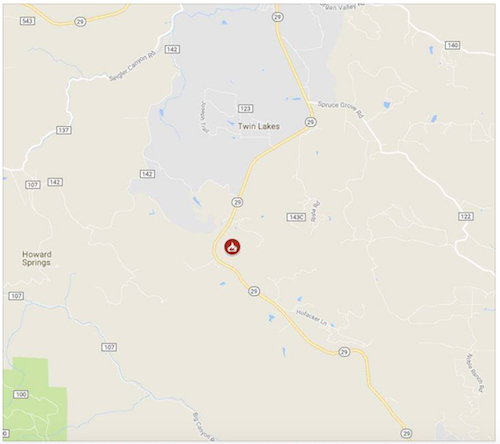 7/17/17, 7PM— Route 29 has been re-opened to one way traffic. The Lake County News is reporting that forward progress on the Murphy Fire has stopped, you can read their story here.

UKIAH, CA, 7/17/17 — While CalFire continues to fight two fires in Mendocino County, a fire has broken out in Lake County that has closed Route 29 near Hofacker Lane, according to a California Highway Patrol alert issued about 3:30pm. The road closure is at Route 29 northbound at Hofacker near mile marker 15.9, and southbound is closed at A Street near mile marker 16.7.

According to a CalFire update from around 3:55pm, the Lake County fire has reached 40 acres and is being being called the “Murphy Fire.” The location is near Route 29 and Agua Dulce, three miles south of Lower Lake.

The Lake County News is reporting that air tankers and ground support are battling the fire, but some structures are threatened. According to a post on their Facebook page around 4:15pm, “Cal Fire Division Chief Greg Bertelli…said they are continuing to make good progress, and that they have large air tankers as well as more ground resources on the incident. The wind is still an issue and there are still structures threatened, so the hard work is continuing.”

Mendocinosportsplus is reporting on the Lake County fire as well, with pictures of the tanker routes over the fire. You can see the post below. We’ll update as more information becomes available.