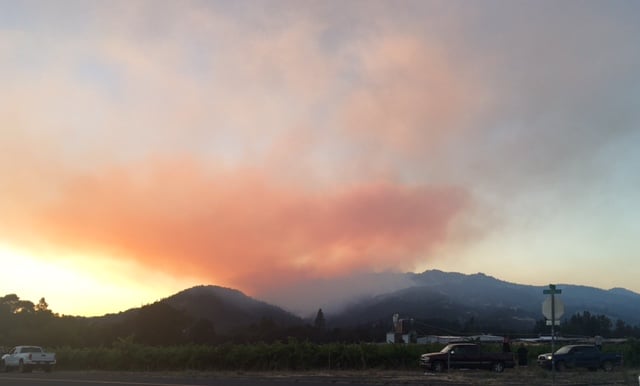 UPDATE 7/19/17 10pm — CalFire investigators have determined that the Grade Fire was caused by a vehicle fire that spread into grass, however, they have not yet determined the cause of the vehicle fire.

7/18/17, 10am — The Grade Fire is now 65% contained, as of CalFire’s announcement this morning. All evacuations have been lifted and no structures were damaged during the blaze. We’ll update as more information becomes available.

7/17/17, 9:30pm — Firefighters will be staying overnight to ensure all interior fires are extinguished and to strengthen patrol lines, according to CalFire’s most recent update. The fire is still at 900 acres and 30% containment.

7/17/17, 5:05pm: The Grade Fire is holding at 900 acres and is now 30% contained, as of about 4:45pm. Firefighters are still on the scene “mopping up,” ensuring control lines are in place, and putting out any active hot spots found in the interior of the fire. We took a tour of the location thanks to CalFire’s Tricia Austin and Emily Smith, public information officers, and talked to them about the methods they use to fight fires, you can see the video below and more footage on our Facebook page.

All evacuations have been lifted and residents are free to return to their homes. Firefighters fought to defend about five structures during the blaze, but thanks to defensible space that had been cleared around the houses, no structures were lost. More information is posted below the video:

The tour includes a stretch of the fire area that is the most active division of the fire, which means there are still some small “islands” of grass that are burning or may catch fire. Crews will remain on the scene overnight to ensure all smoke is fully extinguished to make sure any wind does not re-activate the fire or spread ashes in the surrounding area. The danger for “hot spots” is greatest in the afternoon, when high temperatures and wind conditions can sometimes lead to an increase in the fire. You can clearly see the lines where the fire retardant was dropped and where “dozers” cleared space to create a fire break in the video.

CalFire public information officers explained that some of the air and ground resources called in for the Grade Fire were freed up in time to assist with the Range Fire on Cow Mountain, which began this afternoon. Two private contractors with helicopters, known as “call when needed” support, were on the scene at Cow Mountain this morning, you can see our coverage of that fire here.

CalFire encourages residents to sign up for notifications through the Mendocino County Sheriff’s Office, which enables residents to get alerts when evacuations are occurring in their area. However, due to the fact that many vegetation fires occur in remote rural areas, residents are advised to prepare for evacuations in advance as circumstances may not allow deputies to alert residents by going door-to-door. You can sign up for the CalFire “Ready for Wildfire” app, which sends notifications to your phone when a nearby fire has reached ten acres in size, and you can also follow CalFire official updates using the links at this page.

We’ll update with more information as it comes in, and additional photos and video over the day.

7/17/17, 11:20am: Firefighters will be working to extinguish interior hot spots and improving control lines throughout the day, according to their Twitter page, where updates will be posted. We’re waiting for more information about what crews and air support are on the scene and we’ll update this post when it becomes available.

As of the time of this update the Baker Creek evacuation has NOT been lifted and the Mendocino Sheriff’s Office is requesting residents refrain from contacting the MCSO dispatch with questions but instead follow MCSO on social media for updates. In a Facebook post around 11:30am, MCSO included information from the Office of Emergency Services, which is assisting with evacuations:

The County is committed to getting residents repopulated/back to their homes as soon as it is safe to do so.

MCSO is asking the public not to call the MCSO front desk or dispatch center unless necessary. Instead the public are encouraged to visit the following websites for more up to date information regarding the fire:

Residents are strongly encouraged to register for the County’s Citizen Alert and Notification System at https://member.everbridge.net/index/892807736722865#/signup

Here’s the most recent CalFire update, with some photos, below. You can also check for updates on the Inciweb page for the Grade Fire.

MENDOCINO Co., 7/17/17 — On the second day of the Grade Fire, the fire is holding steady at 900 acres, with 25% contained, no structures damaged, and no injuries reported. The firefighter who was evacuated yesterday with chest pains has been cleared, and is back on duty fighting the fire. And, Hwy. 101 remains open, though there may be controlled traffic in the northbound #2 lane. 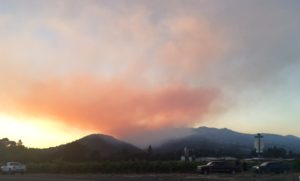 According to CalFire, evacuation orders have been lifted, however, a tweet from the Mendocino County Sheriff’s Office, from 8am, said that all people may return to their homes, except people in the Baker Creek subdivision, in Redwood Valley:

#MEUGradeFire #GradeFire UPDATE:
Sheriff Allman is stressing that it’s safe to return home if u DO NOT live in the Baker Creek Subdivision.

One quick correction, in our previous article we stated that the Red Cross would be issuing hotel vouchers for evacuees, however, it was in fact the Mendocino County Health and Human Services Agency. The Red Cross did not open a shelter last night, and will reevaluate the decision depending on conditions tonight.

We will have more information throughout the day, and will update again soon.