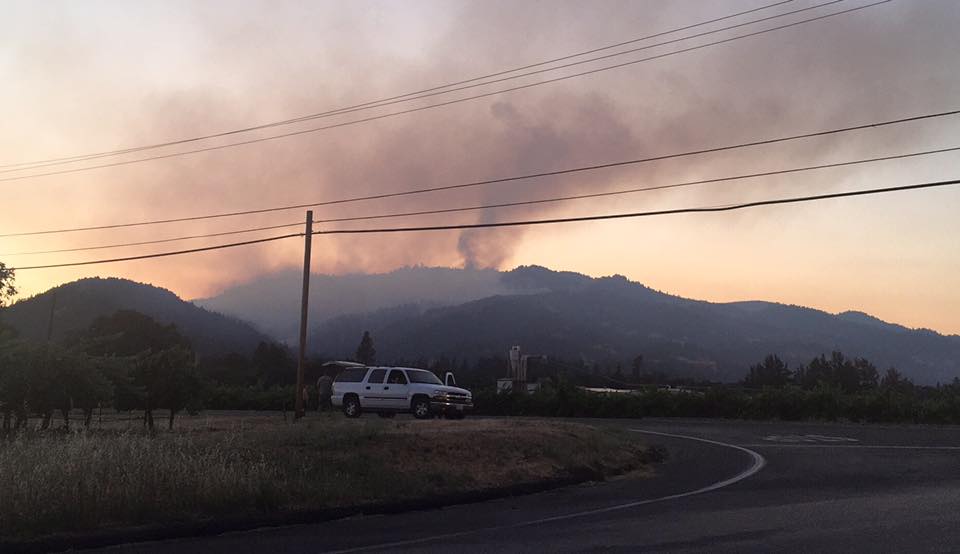 Small correction from last night. The hotel vouchers were provided by Mendocino County Health and Human Services, not the Red Cross.

UPDATE 12:00AM, 7/17/17: CalFire is now reporting that the the Grade Fire is at 900 acres, with the reduction in size due to better mapping. It’s remains at 10% contained, and a CalFire official stated that there have been no injuries, and no structures lost. No specifics, however, on the firefighter that was evacuated with chest pain.

Sections of Redwood Valley have been evacuated, specifically the Baker Creek subdivision. The Red Cross is providing vouchers for free hotel rooms to evacuees, available at the Coyote Valley Casino. More information about evacuations for animals is available in the previous update.

While the evacuation order for Baker Creek remains in place, the order has been lifted for other sections of Redwood Valley west of Tomki, according to the Mendocino Sheriff’s Facebook. However, they caution that conditions could change quickly. They also point out that powerlines might be de-energized, and so some areas around the fire may see power outages.

The fire began this afternoon at about the midway point of the Ridgewood Grade, a stretch of Hwy. 101 between Redwood Valley and Willits. A vehicle caught fire, for unknown reasons, and this fire spread into the roadside brush. The fire quickly climbed the hillside to the ridge, and then spread down into the canyons on the Redwood Valley side of the hill.

As of about 9:30pm, when this reporter drove up the grade, there were hot spots visible on the 101 side of the hill, and substantial smoke and flames on the Redwood Valley side.

UPDATE 8:45PM, 7/16/17: The Grade Fire now stands at 1000 acres and 10% contained, and still growing. Evacuation orders have been expanded, and evacuation centers have been created for people, livestock and pets. People should call the Red Cross at (866)272-2237, to inquire about evacuation centers and possible hotel vouchers. To evacuate horses, livestock or pets call (707)272-2299, to get in contact with someone at the Redwood Empire fairground, which will serve and an evacuation center for animals. For immediate help call Mendocino Health and Human Services, 707-972-7230.

You can follow updates on Twitter under the hashtag #MEUGradeFire, or #gradefire, and also follow the Mendocino Unit of Calfire on Twitter or their Facebook page. You can also check the updates on the CalFire incident page for the Grade Fire. Evacuations are being handled by the Mendocino County Office of Emergency Services — residents in the impacted areas will be contacted by the Sheriff’s Office, but you can sign up for notifications at the link below in this article. You can also listen to the scanner here. We’ll continue to update as more information becomes available.

With the sun now set, aircraft have been pulled back, CalFire generally does not lay down flame retardant or do water drops at night. However, additional crews have been sent to the fire. Though the fire is not fully contained, from a vantage point just below the fire, this reporter can see that it is produce far less smoke than before, though it is still smoking and a some substantial flames are visible. But don’t be fooled, just because there is less smoke does not mean it is out, or over, or safe. Continue to exercise caution.

On that note the Mendocino County Sheriff’s Office has updated their evacuation order. Evacuations are in place for the Baker Creek subdivision, and for areas west of Westside Rd. Here is their post from Facebook:

And from the Red Cross: 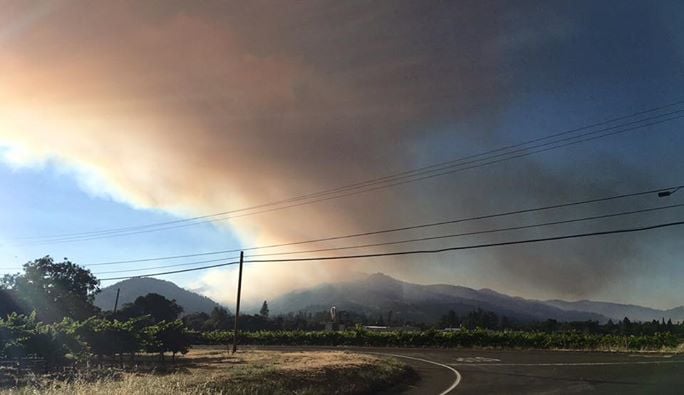 Image of the Grade Fire taken from the intersection of West Rd. and School Rd. in Redwood Valley, CA – Adrian Fernandez Baumann

UPDATE 7:10PM, 7/16/17: The fire has now spread to around 400 acres, and the latest information available put it at only 5% contained. In continues to spread in an area of dense vegetation, in temperatures around 90 degrees, and with a fair amount of wind. Conditions are not good.

CalFire has deployed numerous tankers, and helicopters including a DC-10, and just about every fire department in inland Mendocino has responded. Four more copters have just been requested. Also, scanner chatter indicates that the fire may have jumped Baker Creek Rd.

Scanner traffic indicates that one firefighter had to be evacuated with chest pains, code 3, meaning the ambulance used lights and siren.

Baker Creek subdivision, on Baker Creek Rd. has been evacuated. We can confirm that, having spoke with a deputy on the scene. Evacuations might begin near West Rd. but we are waiting for more information.

Also, a reporter in Redwood Valley has observed several engines and water tenders moving into the valley, so it’s possible that resources have been moved from the 101 into Redwood Valley.

Here is a fact sheet from CalTrans with information about what to do if you need to be evacuated.

Stay safe out there. 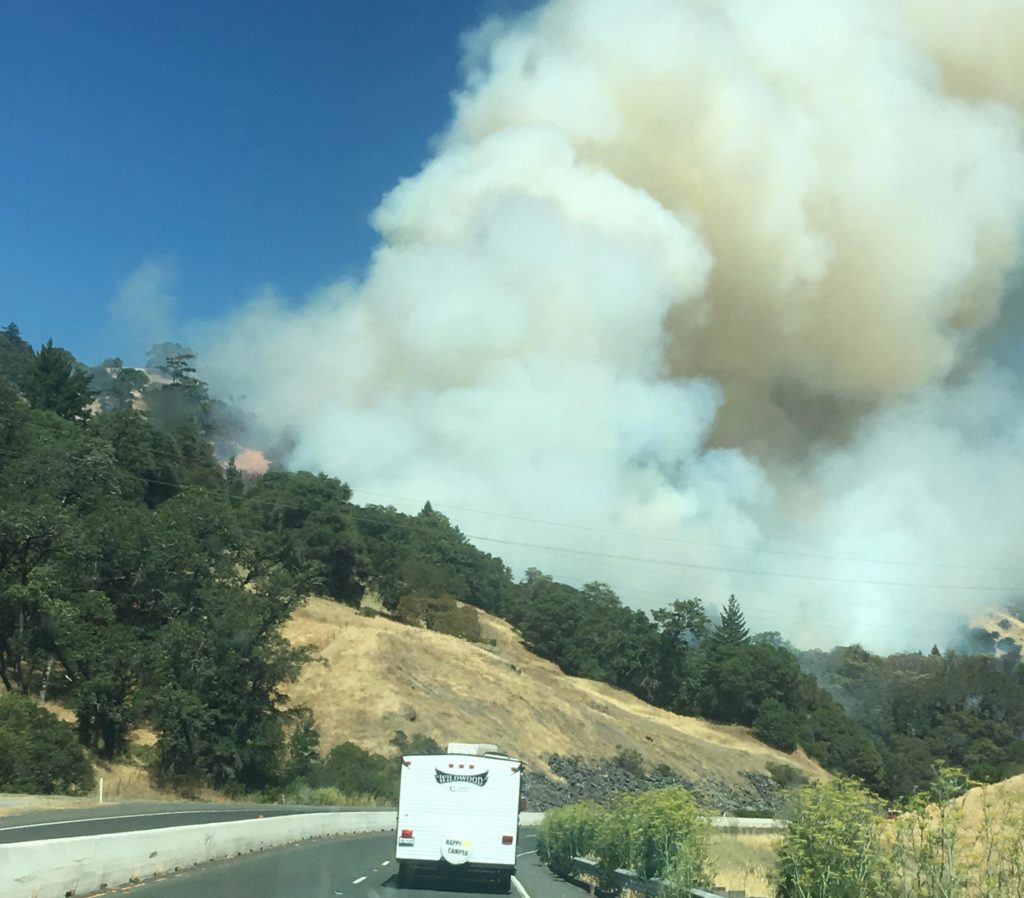 A picture of the Grade Fire along the 101, between Willits and Ukiah. Courtesy of Humboldt Nation.

UPDATE 6:30PM: According to scanner traffic, firefighting crews are fighting to save structures in the Baker Creek subdivision and in the Loughlin Way area. Here’s the latest video from the scene, you can see our updates below.  We’ll update this post as more info becomes available.

UPDATE 5:35PM: Heather Williams at CalFire in Sacramento reports that the fire has now reached 100 acres and is at 5% containment. The highway is open with one lane traffic and traffic controls in place, but traffic movement is very slow going. Evacuations from the Baker Creek began about 15 – 20 minutes ago. You can check the latest updates from CalFire at the Grade Incident page here.

5:20PM: We’ve posted videos from the scene. Evacuations are happening in the Baker Creek Subdivision in Redwood Valley, according to MCSO dispatch. Updated information should be available on the Sheriff’s Facebook page and residents are being notified. Highway 101 is open northbound one lane, according to CHP dispatch.

Scanner traffic indicates that structures are being threatened and crews are fighting to save them. There is also a half acre spot fire on the south flank of the fire.

WILLITS, 7/16/17 — A large fire is burning along Highway 101, between Willits and Ukiah. As of about 3:45pm the fire had reached 50 acres and more than 5 CalFire engines have responded, as well as helicopters and fixed-wing tankers. Local fire departments, include Little Lake and Laytonville have also responded. CalFire is calling this the Grade Fire.

The 101 will not be closed as 4:05pm, according to the CHP. Both southbound lanes will remain open and one northbound lane will be open, so expect delays, but the freeway remains open.

Here’s photos and videos posted below, our reporter is on the scene now. These are posted with the most recent first. We’ll be updated as more info becomes available.

However, over the scanner CalFire is asking for a complete closure of the 101, so don’t hold your breath, or make the trip unless you have to.

The fire has made it to the top of the ridge, and scanner chatter indicates that it has the potential to spread much farther.

The fire began as a vehicle fire, at around 2:50pm, but spread into the brush near the road, then made a quick climb up the hill.

CalFire and local departments have brought significant resources to the scene, including several aircraft, but scanner chatter indicates that the fire has the potential to grow quite large.

We will be updating.

For more check out Kym Kemp’s coverage, good pictures there.

Also, Mendocino Sports Plus has some good pictures and coverage. 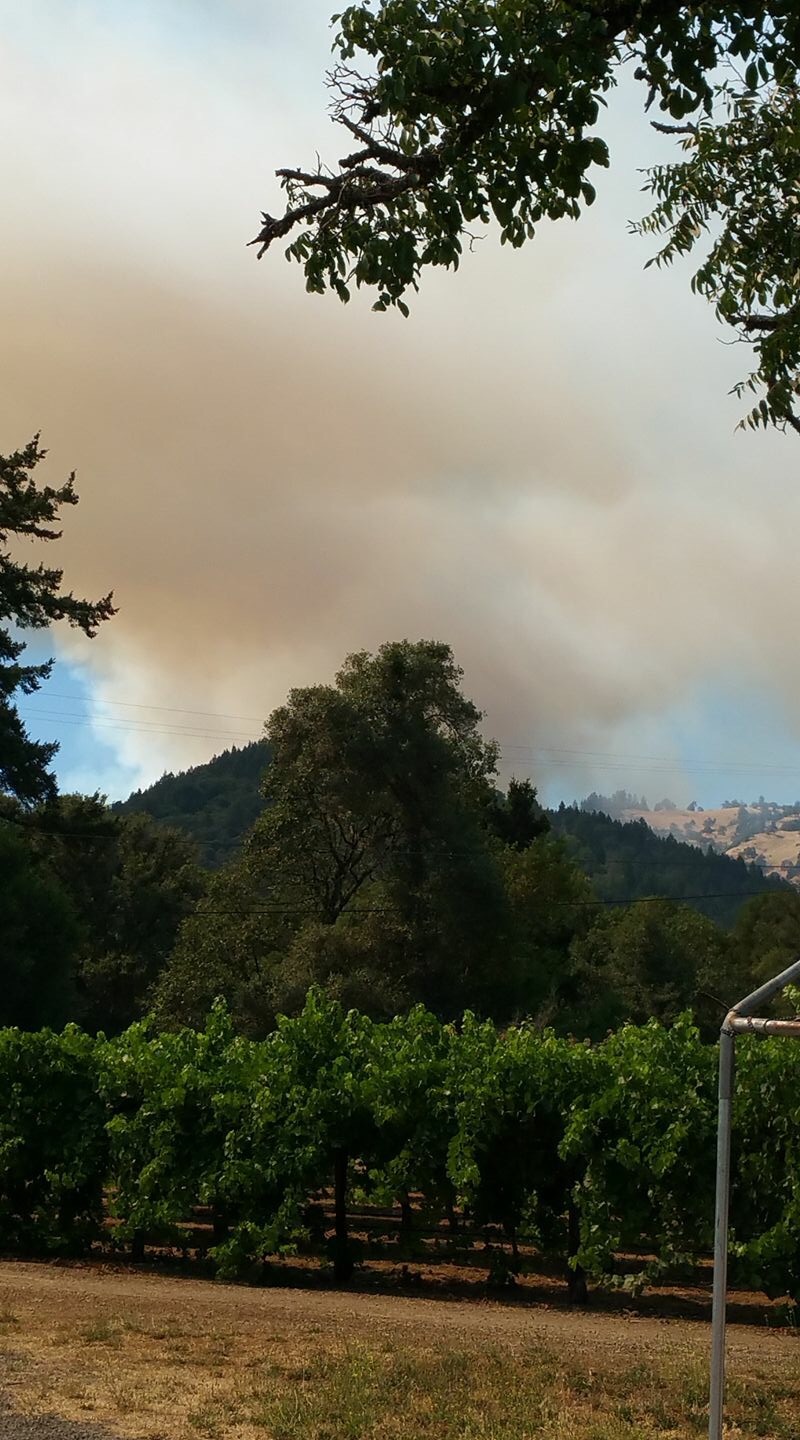