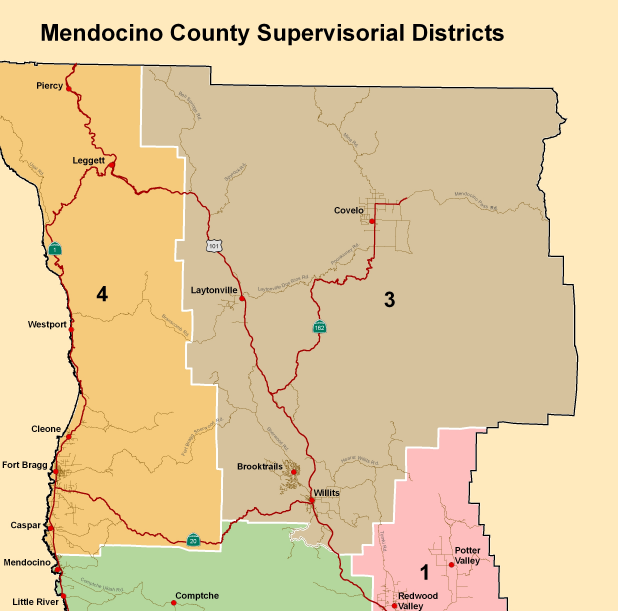 A map of the county districts, showing District 3.

Editor’s note: The opinions expressed in this article are Jim Shields’ and do not necessarily reflect any opinions of The Mendocino Voice. Anyone is welcome to submit a letter to the editor at [email protected] 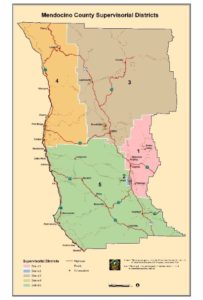 I’m talking about his appointment of Georgeanne Croskey to the vacant 3rd District Supervisor position on the Mendoicino County Board of Supervisors.

Let me say this at the outset, what I’m about to say is not about Ms Croskey, it is about a failure in the process of how this appointment was made. She had nothing to do with that process other than submit an application for appointment to the Governor’s office. The failure lies with the governor. Here’s why.

Many people in the 3rd District don’t know Croskey or anything about her. Her only experience in local government here is she was appointed to a vacant position on the Willits school board in October of 2015.

She has never run for an elected office, so obviously she has no experience in electoral politics.  She’s never had to stand before voters and explain to them why they should entrust her to represent them.  That is the most important and critical part of our electoral process:  facing the voters.

As a former long-time elected official, I’ve always said the only qualification to holding office is to get the most votes. The voters decide if you’re qualified or not. That tenet is the only one that counts —literally.

However, when it comes to appointments to vacant elected positions, it’s a different deal.

Case in point is the 3rd District vacancy.  It came about when then-Supervisor Tom Woodhouse resigned in early December of last year due to health reasons. His position has been unoccupied and 3rd District citizens have been unrepresented since then. That’s nearly six months folks have not had someone representing their interests on the Board of Supervisors.

During that period, the Board has been dealing with a deteriorating mental health system, a county road network that is falling apart that’s been made worse by this winter’s historic deluge, 18 months of stop-start action on marijuana rule-making that’s not complete yet, and now it’s budget talk time.

These are all big issues that need big thinking and require big problem-solving capability.

There’s about 18 months left in the term of office for 3rd District Supervisor. That’s not a whole lot time for a political neophyte to learn everything that needs to be learned about the job of a county supervisor, especially given the fact that the clock is running right now on a whole host of knotty issues and problems.

That’s why the Board of Supervisors, myself, the Ukiah Daily Journal, and many others urged Gov. Brown to appoint somebody with governing experience to fill the 3rd District vacancy. We recommended he select former long-time supervisor and Laytonville homeboy, John Pinches. Others backed former Willits mayor and city council member Holly Madrigal. We all knew and were in agreement that given the current state of affairs in this county, that it was vital to appoint somebody with political and governing experience who could literally hit the ground running and get to work immediately as a fully functioning county supervisor.

In a published report in the Mendocino Voice, Croskey said the following on her appointment, “At this point I don’t want to speak for the board before I have more information, I’m not privy to a lot of closed-door discussions. And I have a lot of work to do to get some more background information before I come out with my positions on issues.”

The “closed-door” comment is interesting. Evidently, Croskey is not aware of the state’s open meeting law, the Ralph M. Brown Act, which governs the local governing decision-making process. Close-door discussions are strictly illegal. Elected officials can only make their decisions in one forum: Open public meetings.

It’s surprising that Croskey, who has served on the Willits school board for the past 18 months as an appointee, is not aware of the Brown Act’s ban on closed-door dealing, it’s basic local government 101. It’s a major violation of the law.

I thought Madrigal’s comment on the situation was on point when she said, “I wish the 3rd District the best of luck.”

“Georgeanne Croskey, 38, of Willits, has been appointed to represent the third district on the Mendocino County Board of Supervisors. Croskey has been a veterinarian at Mendocino Equine and Livestock since 2012. She was an extern at the Ohio State University Veterinary Medical Center from 2008 to 2010, veterinary assistant at the Paws Inn Animal Hospital from 2005 to 2006 and a captain in the U.S. Air Force from 2000 to 2005. She earned a Doctor of Veterinary Medicine degree from Ohio State University. This position does not require Senate confirmation and the compensation is $61,200. Croskey is registered without party preference.”

Now here’s something interesting about Brown’s appointment that day:  He also made an appointment to fill a vacancy on the Riverside County Board of Supervisors. In fact, both vacancies occurred at about the same time last December. So he had the same amount of time to consider both appointments, and as I said, he made his decision on both vacancies the same day, May 9th.

What did he do on the Riverside County BOS vacancy?

He tapped V. Manuel Pérez, an experienced elected official to fill the position for the next 18 months.

So Brown demonstrates with the Riverside County appointment that he understands and practices the proper and intelligent way to fill local government vacancies.  If at all possible you choose a candidate who has the requisite experience so there’s no lost time with on-the-job training and learning the basics on-the-go.

So what was Brown’s reasoning in making either of these appointments?  We’ll probably never know because the appointment process is shielded by executive privilege, thus shrouded in secrecy.

But Gov. Brown was dead wrong on his decision in the Mendocino County case, and I say that as someone who generally supports him. The people of this county deserved a hell of a lot more respect and better treatment than he gave them.

So, I guess I’ll join Holly in wishing the 3rd District the best of luck.

I’ll also wish Ms Croskey the best of luck because it’s important for this county that she succeeds, she just shouldn’t have been placed in this situation by the Governor.

Jim Shields is the Mendocino County Observer’s editor and publisher, and also manages the Laytonville County Water District. Listen to his radio program “This and That” every Saturday at 12 noon on KPFN 105.1 FM, also streamed live: http://www.kpfn.org