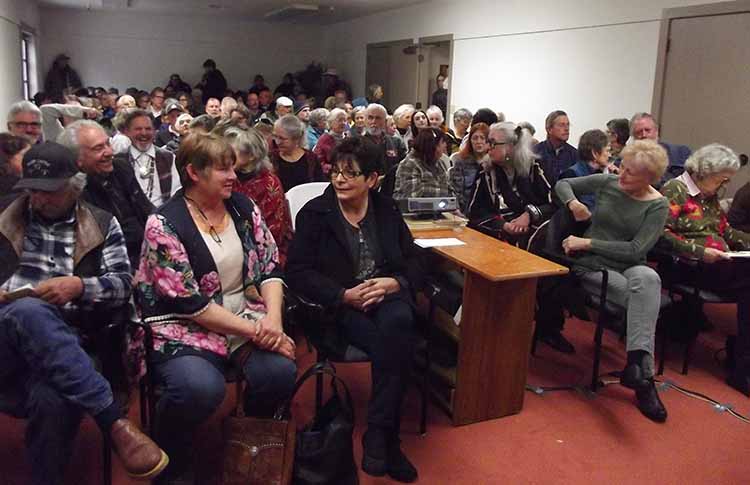 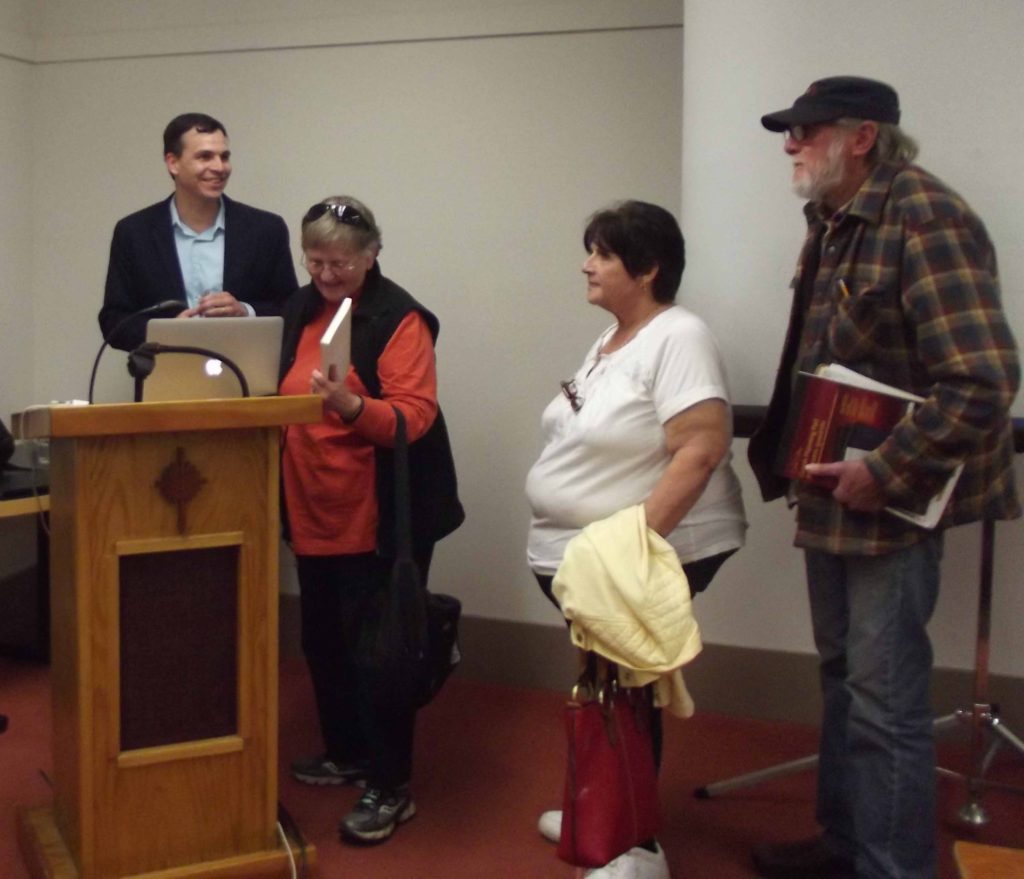 Bauer signing a copy of his book

UKIAH 2/28/2017 — About 160 people came to the Grace Hudson Museum in Ukiah on Saturday afternoon to hear a lecture by a Native American historian who tells the history of California using only indigenous sources. Dr. William Bauer, who is Wailacki and Concow, grew up in Round Valley and teaches history at the University of Nevada at Las Vegas. His most recent book, “California Through Native Eyes: Reclaiming History” is based on oral histories told by Native elders, including Bauer’s own great-grandfather, as part of a State Emergency Relief Administration (SERA) project, during the Great Depression. University of California Berkeley anthropologist Alfred Kroeber was hired in 1935 to organize the SERA project upon which Bauer’s book is based. Bauer used the interviewers’ handwritten notebooks, rather than the anthropologist’s typewritten versions, because the final drafts were heavily edited.

Bauer noted several features shared by many of the stories he found in the Bancroft archives at the UC Berkeley campus, saying that “Oral histories and oral traditions are not historically worthless. They are different, with valuable ways of understanding the past.” Most importantly, he argued, the indigenous method of telling history prioritizes physical location, rather than a sequence of dates, as is the practice for most modern historians. He also offered his audience an example of a well-known story he believes was a contemporary social critique, and another that was used to communicate social norms. Both indicate an ongoing relationship with history, he asserted.

In addition to being told by Native subjects, the stories were told

to Native interviewers, a fact that Bauer stressed in his talk. While this project had similarities to the Works Progress Administration’s effort to collect African-American slave narratives, Bauer pointed out that the power dynamic in the California project was much different, as some of the former slaves in the southern states were telling their stories to the descendants of people who had enslaved them.

“History is at its core a revisionist practice,” Bauer told his audience, which included several people he had interviewed for his 2009 book, “We Were all Like Migrant Workers Here: Work, Community and Memory on California’s Round Valley Reservation, 1850-1941.” Elaborating on the theme of location as a central component of indigenous historical knowledge, Bauer said that

“Knowledge and history are rooted in particular places that have spiritual significance…oral narratives follow topographical markers, not chronological ones.” Many of the stories also have what he calls a “relational” element, which means that all aspects of the world are considered to be sentient. In one of the stories Bauer shared, a murdered woman’s baskets demonstrated their sentience by following directions from her son.

This story was told by John McWhinney, who was 79 years old when he told the story to Lawrence Allen, who was renowned Pomo basket weaver Elsie Allen’s brother-in-law. In the story, Deer is killed by her husband, Bear. Bear’s stepson has caught game for the family, then taunted his stepfather for his failure to provide for the family. Deer’s son then burns Bear to death in his den, which causes the earth in the surrounding area to turn red. Bauer explained that in most versions of the story, Deer and Bear are both female characters. When Bear murders Deer, she is usually punished by being forced to eat her own children. Bauer posited that this might have been a story about a dysfunctional marriage between an Anglo man and a Pomo woman, noting that McWhinney might have been commenting on “The problematic nature of Pomo-Anglo marriages in the late 19th and early 20th century. Anglo men failed to provide for Pomo families. Anglo men treated Pomo women poorly, even to the point of killing them…This is my best shot at interpreting what he wanted to say,” Bauer concluded.

Another story, told in 1935 by a 64-year-old Pomo woman named Susie Wathen, begins by describing a mountain and a pair of lakes, now known as Blue Lake and Mud Lake, located on an old Indian travel trail that used to be flat and dry. The tale is an explanation of what may have been a geographical cataclysm, featuring a great dreamer who creates a lake and then turns into a dragon that resides beneath the water. His family grieves for him, and eventually they all walk into the water, which gives occasion for a detailed description of the proper way to mourn, and the length of the mourning period. Bauer said that Wathen, like McWhinney, ensured that her story would have meaning for contemporary indigenous people when she placed this speech in the mouth of a young girl, just before she walked into the lake in a long-ago time: “Our own kind of people are the planters of seeds, the gatherers of grains. Through our harvest, the hungry are fed. Our hearts hold many stories. By our fingers, bright pictures of designs are brought. We are the makers of trails. In our footsteps, a civilization follows. Over our once-silent paths, the traffic of a nation moves. Our campfires drive back wild animals. We were the pioneer, or even the frontier.”

No indigenous people in Eureka were interviewed for this project in 1935, because anthropologists at that time believed there were no more Indians left in Eureka. Former Ukiah poet laureate Linda Noel, who, like Bauer, can trace her ancestry to the Concow people who were forced to move to Round Valley, sat in the front row and remarked, “Isn’t it amazing that we’re still here.”