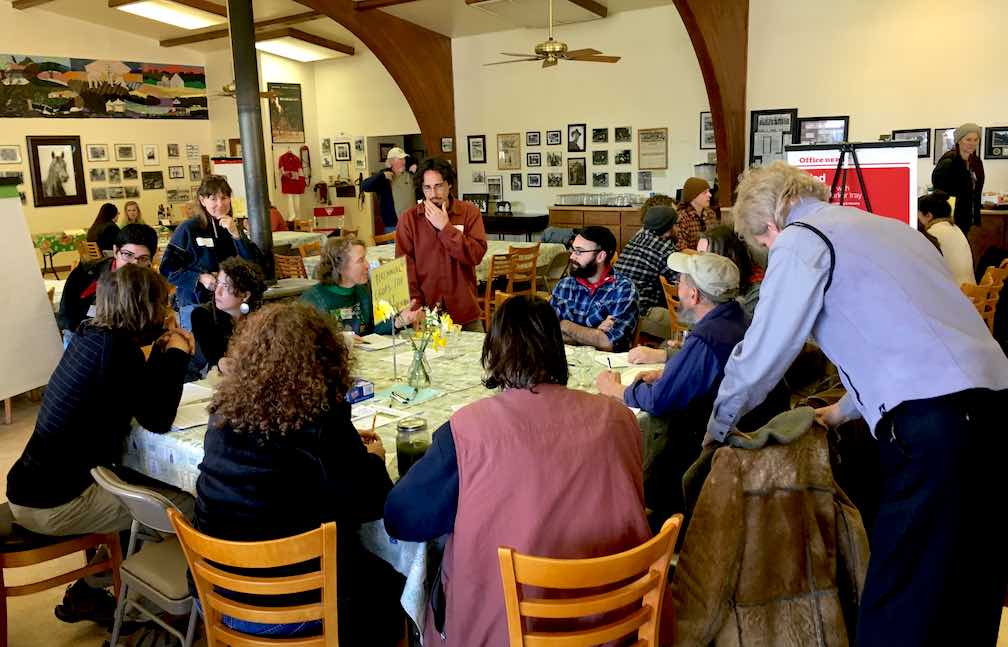 RIDGEWOOD RANCH, 3/1/17 — “Together, we are the local food revolution,” said the Mendocino Grain Project’s heritage grain farmer Doug Mosel, who received a raucous round of applause from the chapel full of local farmers gathered at the 5th annual North Coast Farmers Convergence at Ridgewood Ranch. The hundred and fifty attendees, including farmers, food advocates, retail food buyers, and a diverse group of local food enthusiasts, came together this week to cross-pollinate and build inter-generational connections with talk of seed saving, crop planning, financial sustainability, and politics in the North Coast foodshed.

The Farmers Convergence, hosted by North Coast Opportunities (NCO), provides a day-long event for those involved in the local foodshed from Marin to Humboldt to share expertise between like-minded farmers, buyers, and activists. Talks this Tuesday included pragmatic workshops on farm accounting and seed saving, but also took on more complicated topics such as how to increase purchases of locally grown food in Mendocino itself, and how a more regulated cannabis market might impact local food producers. How the Mendo-Lake Food Hub expand to better connect farmers with consumers, and how farmers can find their market niches, addressed by keynote speaker Dina Izzo, were also important topics throughout the day.

This year, with drought concerns receding, the theme of transitions cropped up again and again — in talks about winter turning to spring, in discussions of young farmers trying to get established, in conversations about national and regional politics, in chats about local food distribution, and even regarding the conference’s organizing team. Now in its fifth year, the previous organizers of the Convergence have all been replaced by a group of younger NCO staff who stepped up to make the transition seamless.

Another staffing transition is happening the Mendo-Lake Food Hub, which provides a wholesale purchasing website, distribution network, and series of cold storage nodes for local farmers to facilitate local food purchases by local grocery stores, school, and institutions. The Food Hub is now in its third year thanks to funding from a USDA speciality crop grant, but John Bailey, the former coordinator who established much of the program’s infrastructure, has left the position for a job at the Hopland Research and Extension Center.

Caroline Radice will be replacing Bailey as the manager of the Food Hub beginning this week, bringing a background as a an NCO staff member, Good Farm Fund coordinator, and local farmer and caterer with Black Dog Farm in Potter Valley. Radice was selected after a national interview process, and is intimately familiar with many of the challenges facing local small farmers, as a participant in the Food Hub herself. “I’m really excited about all the possibilities,” she said, “John did so much of the hard work setting up the hub with the routes and the nodes, so I feel lucky — I’m excited about all the different things we could do with the Hub.”

Several of the afternoon roundtable discussion groups touched on such possibilities, including how to increase the percentage of local food sold in local stores, and how to coordinate amongst local farmers to better utilize “seconds,” or the produce that is still delicious, but can’t make it to market due to superficial defects, distribution logistics, or for a variety of other reasons. 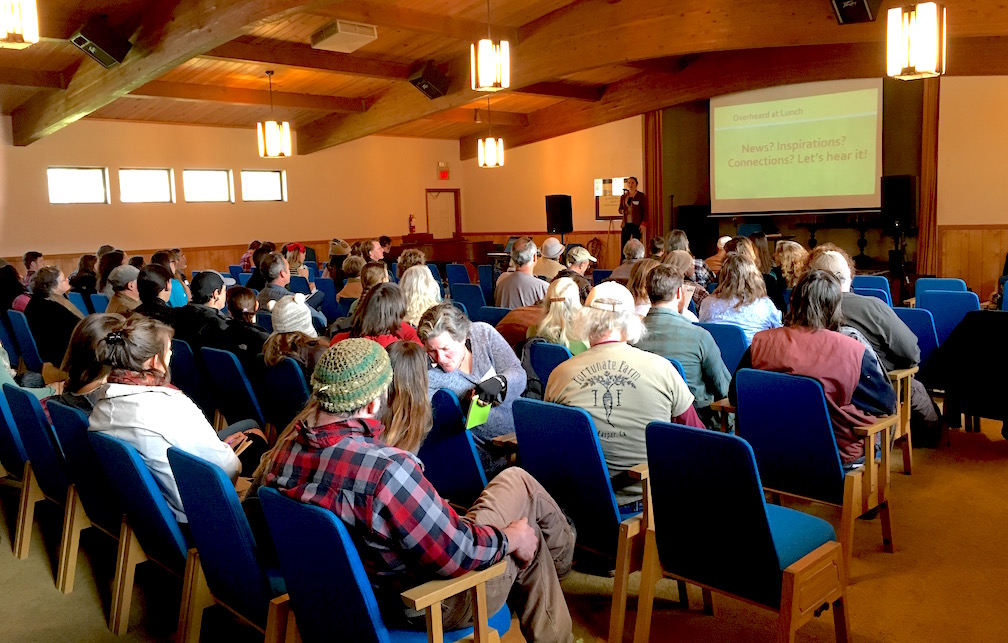 Ruthie King of the Grange School of Adaptive Agriculture talks to the crowd. 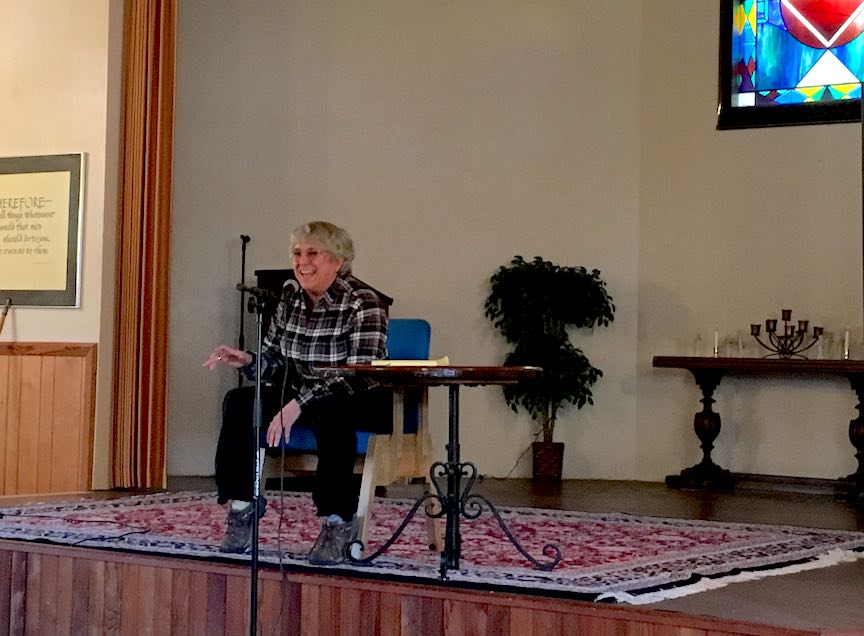 Dina Izzo of BlueDog Consulting gave the keynote talk on Know Your Farm, Love Your Farm and how to find your niche in the marketplace. 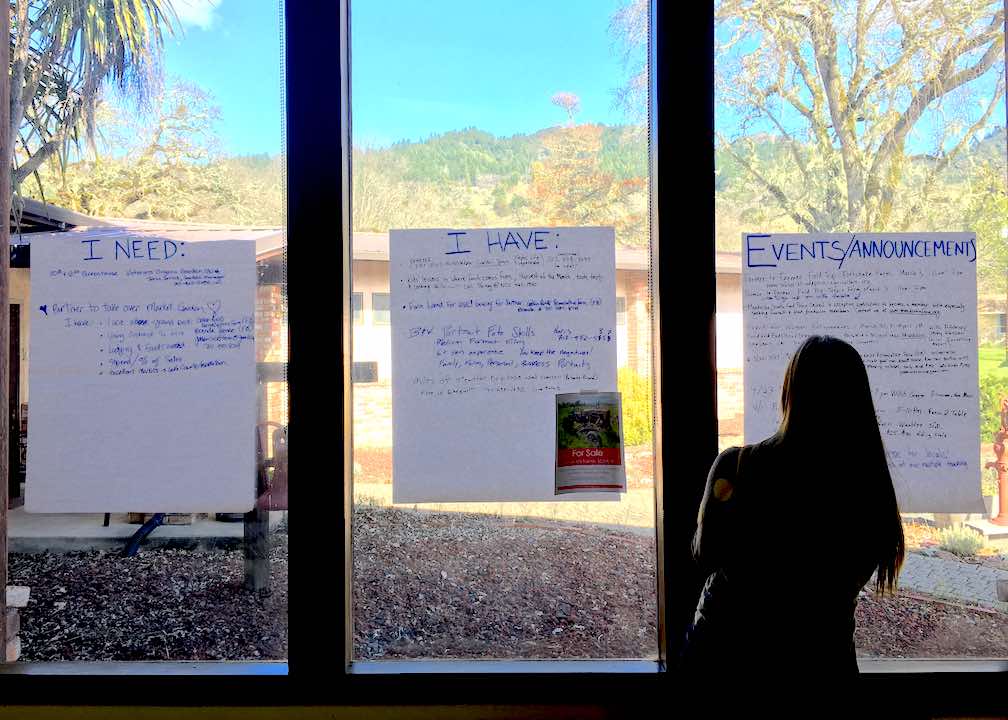 I Have and I Need signs were put up to facilitate connections, a method used by the Farmers Guild. 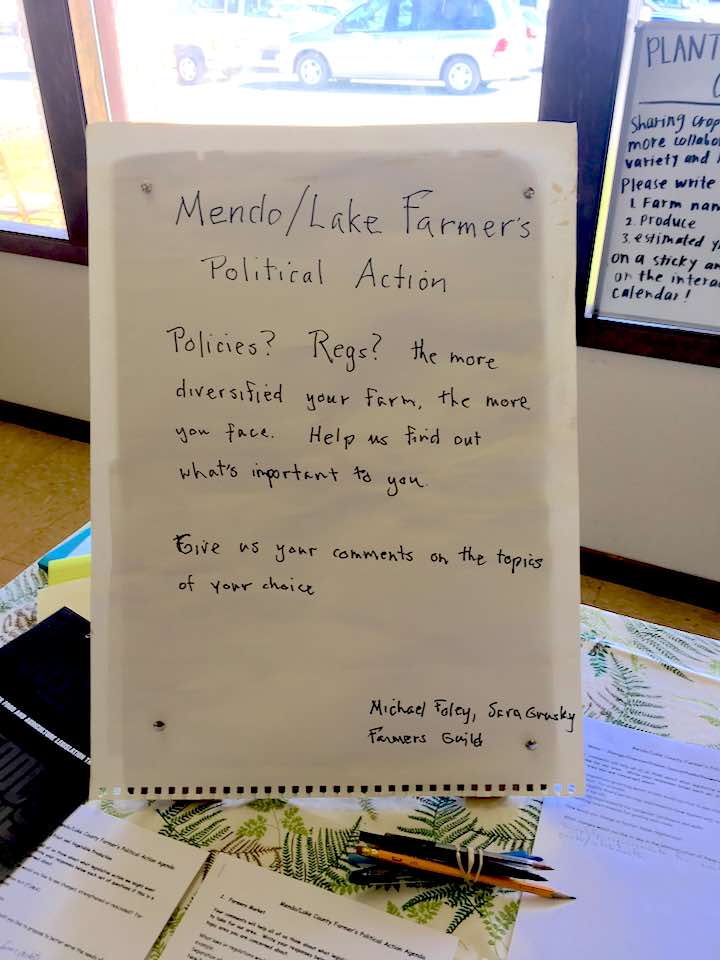 A political action group for farmers was one option on the table. 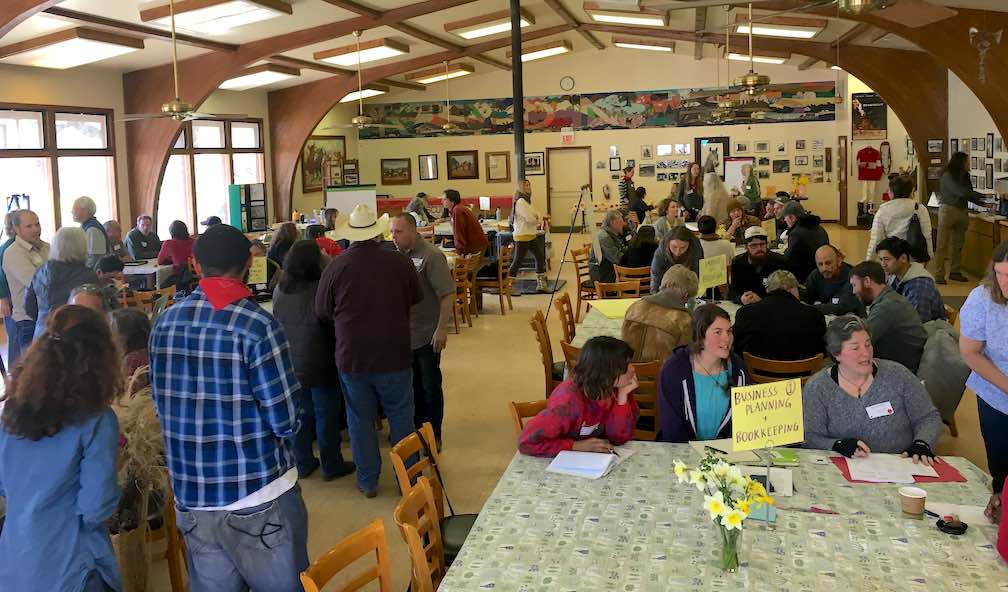 The dining hall was full for the many different roundtable discussions. 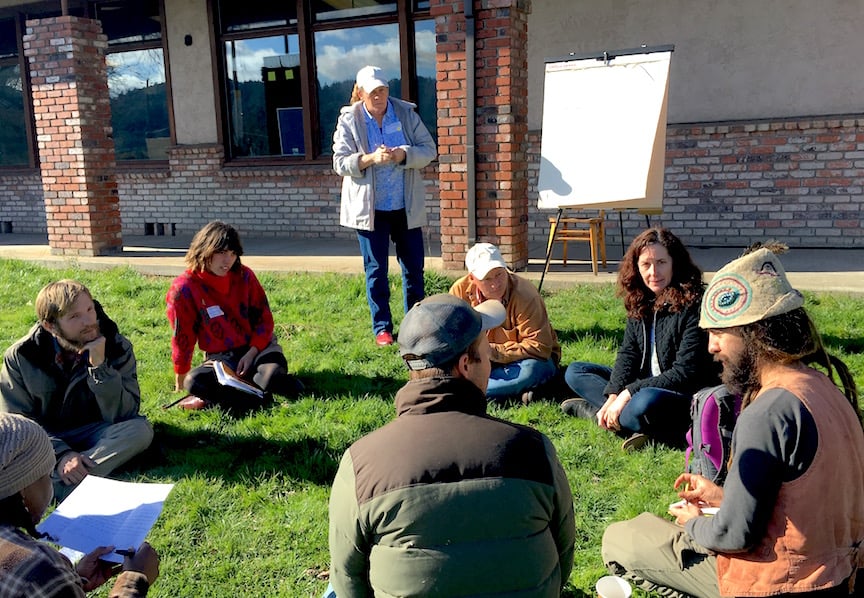 A few groups took advantage of the sunshine; this roundtable takes on keeping careful crop records.

One roundtable group, led by Radice and the Ukiah Farmers Market Manager and Westside Renaissance Market owner Scott Cratty considered whether the Food Hub could help farmers create “value-added” products such as preserves or sauces by connecting cooks with wholesale produce, and commercial kitchen, processing, and packing space. This could ultimately reduce waste and create additional revenue streams for farmers, and some of the produce could go into a line of “Mendocino Grown,” line of goods which would be available at local markets.

Drawing on her background of 30 years in the organic produce industry, keynote speaker Dina Izzo, of BlueDog Consulting, touched on how beginning farmers — and more established ones — not to follow the most obvious route, but instead find their niche in a local market by identifying their strengths and weaknesses, including the characteristics of their farmland. Once a farmer knows their capacity, she emphasized, they will be able to find their niche, sell what they love, and provide a better product to their real customer, “the eater.”

Izzo suggested farmers consider carefully whether marketing directly to a consumer, selling through wholesale distributors, or at a retail store will work best for them. She noted the importance of crop plans and reminded the group that they may need to educated consumers if they want to grow something that isn’t commonplace in grocery stores. See more video at the end of the article.

The roundtable discussions ranged from composting techniques to holistic management, perennial drought-tolerant crops to keeping crop records, but how to work together to create a more farm-friendly local politics was a reoccurring theme. Local diversified farmer Casey O’Neill of Happy Day Farms gave an overview of new state and local cannabis regulations, which redesignate cannabis as an agricultural crop, and talked about how cannabis farming can co-exist with other agriculture in California’s new commercial cannabis market, an issue that came up in many different conversations.

Other roundtables included discussions about the benefits of the cooperative model, in which attendees saw promise for many different types of farmers, including those working with cannabis, and “Niches of Resistance,” which took place at the sunny picnic tables and took on “Farming in the time of Trump.” An informational table was set out as a place to coordinate a new Mendocino-Lake political action group and help farmers collaborate on local policy issues.

The event also included an always popular locally-grown breakfast and lunch from Black Dog Catering, and a farmer/buyer mixer at the end of the day to further develop market connections between producers and retailers. The raffle, which in the past has included irrigation and farm equipment, this year included one night stays at Orr Hot Springs and several hotels on the coast, “to help farmers take some time off,” explained Food Hub assistant Arianna Chiechi.

Heritage grain farmer Doug Mosel concluded by encouraging the crowd to continue to be “carrying on,” despite political and climatic uncertainty ahead. Mosel read a few passages from author and farmer Wendell Berry, and emphasizing keeping “our eyes on the context in which we do the sacred work,” and considering “the implications of what we grow and how we grow it,” before reading a call for a local food revolution that drew calls of support from the room.

More farming workshops will continue over the next week as an extension of the Convergence. On Wednesday, March 1, Izzo will be back at Ridgewood Ranch from 9am – 3pm holding a free workshop on in-depth farm management techniques called “Know Your Farm.” There are also two upcoming “Farmer to Farmer Field Trips,” one on Friday, March 3, at 11am at Fortunate Farm in Caspar, and another on Sunday, March 5 at 11am Tequio Community Farm outside Willits, where the owners recently had to rebuild their new greenhouse after winter storms, and also won the Farmers Guild “Farmers of the Year” award.

Izzo on how “Customers are like your boyfriend or girlfriend”:

Izzo on finding the right wholesalers and retailers to work with: