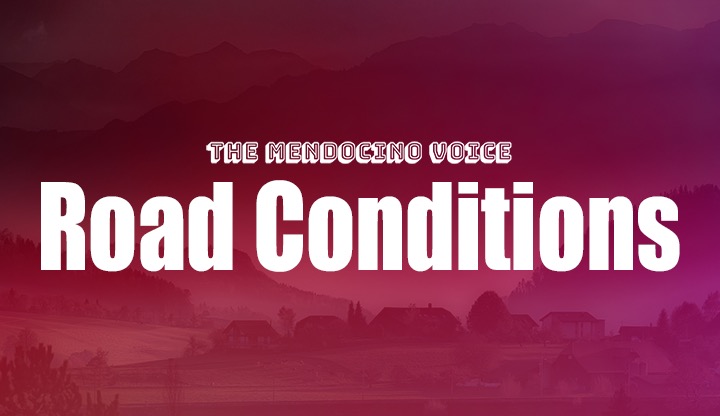 Orr Springs Road, about 5 miles west of Ukiah, is most definitively closed. Here are some pics, courtesy of Three Sisters in Ukiah:

UPDATE 1pm: Roads closed, according to CalTrans and the Mendo County Dept of Transportation:

As of noon, Hwy 101 about six miles north of Laytonville is closed, due to a small slide and a fallen tree, which are blocking all lanes.

Feb 21, 2017 1100am
The following roads are CLOSED. There is no estimated date/time of opening. Please use alternate routes.

Flooding has caused closures on the 128, Rt 1, and Hwy 175. There are also scattered power outages throughout the county, with almost 300 customers in Point Arena and over 100 customers each in Fort Bragg and Willits without power. The 128 is closed from Rt 1 to Navarro Ridge Road. Rt 1 is fully closed from Lighthouse Road to Fisherman Drive. The 175 is closed from 101 to East Side Road.

The Navarro River was still above flood stage, early this morning. Here are some graphs of the river, courtesy of the USGS website: 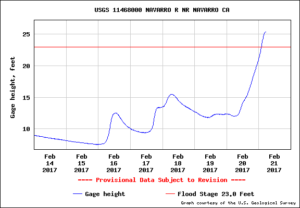 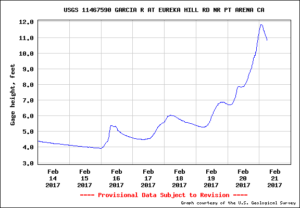 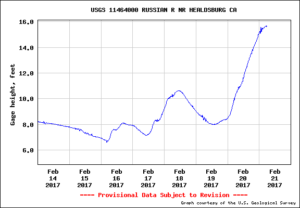 Mountain View Road between Boonville and Point Arena is closed, due to a slide at mile marker 18.5. As of 6:46am, there was a large tree down across Fircrest Drive in Ukiah, blocking both lanes. Mendocino County Sheriff Patrol reported flooding across the road at Talmage and the Talmage Court area, though no road closures are reported in the area as of early Tuesday morning.

On Rt 162, there is a flagging operation at The Middle Way due to drainage work. Also on Rt 162, the eastbound lane near Mark’s Place is closed due to emergency work. There is a slide blocking half a lane on Highway 20 at mile marker 27, between Willits and Ft. Bragg.

The U.S. National Weather Service predicts showers and possible thunderstorms today, with a potential for small hail starting mid-morning. Here’s a video of the weather system, and an explanation of the forces at work:

As a pair of upper-level disturbances cross the region today and again overnight tonight, showers will continue to develop with a few thunderstorms also possible. These disturbances will also bring much colder air aloft across the region, increasing the possibility for them to be accompanied by small hail. Here’s an animated radar loop (simulated) from one of our hi-resolution models, depicting this shower and possible thunderstorm development.

Although small hail is possible at any time through Wednesday morning, the two main time periods when hail potential looks to be somewhat higher is from mid-morning today through the early evening, and again after 3 AM tonight, continuing through mid-morning Wednesday. Please remember to use extra caution when approaching hail-covered roadways.

Thunderstorms could also be in our future today and tonight: