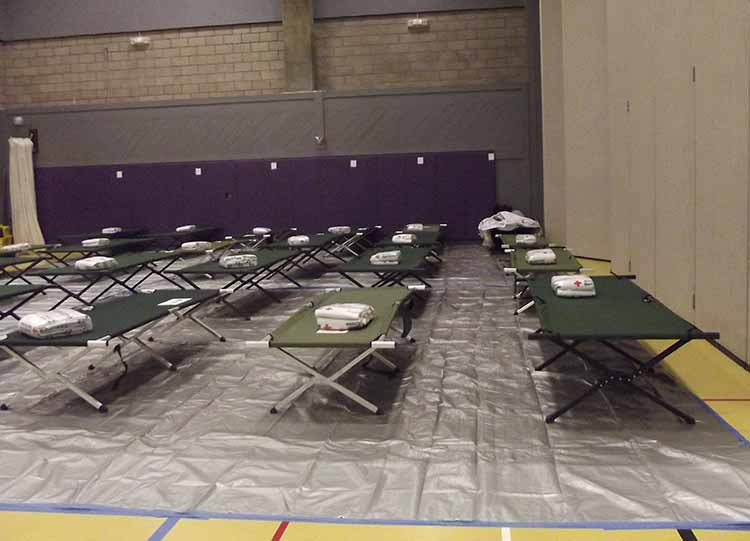 Some unoccupied cots in the Ukiah High gym. 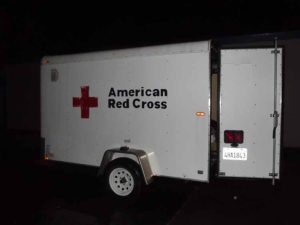 UKIAH 1/11/2017 — With Ukiah’s Oak Manor neighborhood on a voluntary evacuation notice and the Russian River expected to flood at Hopland around 9pm, the American Red Cross and the Mendocino County Health and Human Services Agency (HHSA) set up two evacuation centers in Ukiah. One, on the east side of the Russian River, is at the Mendocino County Office of Education. The other is at the Ukiah High School gym, at 1000 Low Gap Road.

A little before 8pm on January 10, Mendocino Health and Human Services Director Tammy Moss Chandler and Heidi Corrado, a senior program specialist with HHSA and a volunteer on the agency’s disaster response team, were setting up snacks and laying out paperwork. 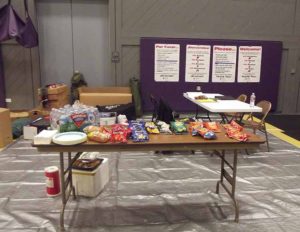 Snacks for evacuees at the high school gym

Two dozen cots were set up in the high school gym, but only three people had shown up early on the center’s opening night. This is typical, explained Corrado. Often, evacuation centers don’t fill up until after hotels in the area are full. Corrado’s experience with disaster relief includes helping to set up fire shelters in Leggett a few years ago and at the fairgrounds in Ukiah for evacuees from the 2015 Valley Fire in Lake County. “I was a paramedic and a law enforcement officer,” she said, “So I thought this would be a fantastic opportunity to serve my community.” She added that she worked as a paramedic in Sacramento during the floods of 1995-96. 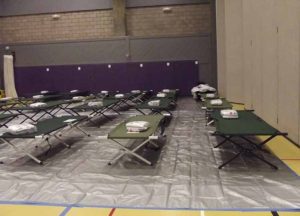 Some unoccupied cots in the Ukiah High gym.

Food items, she advised Moss Chandler, who was taking advantage of a break in the weather to pick up coffee and snacks, should be non-perishables that people can grab and go. “We don’t have anything really healthy, except the nuts,” Moss Chandler said, eyeing a box of pastries she planned to offer guests in the morning. The women agreed on granola bars, fresh fruit, and juice boxes for the kids, should any children take refuge in the gym.

The center is set up so that evacuees of all ages, including those with specialized medical needs, can stay there day and night. Rich Molinari, the manager of the county animal shelter, came by with a few crates for guests who come to the center with their pets. Evacuees who cannot care for their pets can take them to the animal shelter, but, Corrado said, “It’s not like surrendering your dog. They’ll take them overnight.”

Outside, the moon was visible between a few clouds in the sky. It wasn’t raining at the moment, but, Corrado pointed out, “Just because it isn’t raining downstream doesn’t mean it isn’t raining upstream.”
Sarah Reith [email protected]