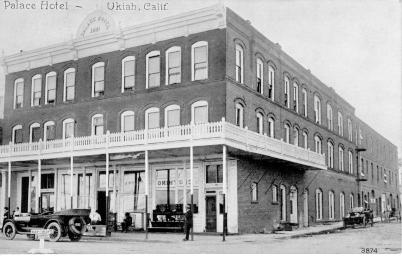 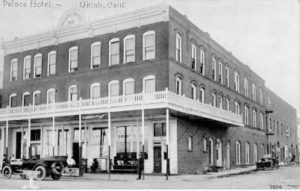 UKIAH 1/9/2017 — At a hearing at the Mendocino County Superior Court in Ukiah on January 9, Judge Leslie Nichols granted the City of Ukiah’s application to appoint Mark Adams as the receiver to take over the management of the Palace Hotel, centrally located at 272 North State Street in Ukiah. Resolution of the matter was one of three “big ticket items” mentioned by incoming Mayor Jim Brown when he was asked about his resolutions for 2017. The unused hotel is considered a landmark, and its future has been the object of much speculation and opinionating for decades.

The Ukiah City Council declared the 16,000 square foot building a public nuisance in 2011, and attempts to bring the building up to code through mediation with Eladia Laines, of Unique Properties in Sausalito, have been unsuccessful. The court documents list Laines and “Questex, Ltd. a revoked Nevada Corporation,” among the respondents to the city’s petition. The order refers to Questex as the owner of the property. Laines was present at the hearing and expressed dismay at the outcome, murmuring, “This is ridiculous.” Last year, Nichols declined to grant the city’s petition to appoint a receiver, suggesting instead that Laines and the city of Ukiah resolve the issue through mediation.

Adams, of California Receivership Group, a company based in Santa Monica, will manage the property. Adams is charged with all of a property owner’s responsibilities, including rehabilitating the building, bringing it into compliance with state and local codes, applying for permits, and obtaining financing for work on the property. He will not be held personally liable for payment of court-authorized costs associated with the receivership. He has thirty days to file an inventory of the property and submit a plan to the court. The court order authorized an initial borrowing of $35,000 and an hourly rate of $350 for Adams’ services.

Counsel Huber argued that the building is a danger to public health and safety. He illustrated his point by saying that in the event of a fire, the lack of fire sprinklers or fire monitors would expose nearby structures to the danger of flames. “The only way we will know if there’s a fire in that building, if one exists, is if someone sees it from the ground level, looking in the building,” he declared. “At that point, who knows how big the fire would be.” He read from a structural engineer’s declaration about the structural integrity of the property, which stated in part that a perimeter security fence could be built around the property, which would protect pedestrians and vehicles from being hit by falling objects. Huber said that the  declaration includes “a tacit acknowledgement that, if the building comes down, you’re going to want to put up a fence all the way around it.” He pointed out that in order to do this, three streets, including State Street, would have to be shut down.”

Huber also told the court that Adams, the professional receiver, had said he thought he could have a plan together within 30 days of getting control of the property. Laines and her former partners purchased the Palace Hotel in 1989.

Epstein began his remarks by saying he was “puzzled about the city’s singular focus on the remedy of receivership.” He told the court he thought a city would typically request an injunction against a nuisance property in a case like this one. With his own experience as a city attorney, he said, “I don’t typically take cases against cities.” But when he saw the facts of this case, he added, “I just didn’t get it.”

Counsel Epstein took issue with Adams’ claim about how swiftly he could get the property in order, saying that this assertion was “Just as easily critiqued or disbelieved as the petitioner wishes to address the statements made by Ms. Laines and her representatives.” He said he thought the Palace was not nearly as much of an earthquake or fire hazard as many other buildings in town, because it is unoccupied. He added that, “I would suggest to the court that the city’s professed concern about the risk of a seismic event is belied by the fact that…a Halloween carnival, where children were invited to play directly adjacent to the building was permitted, I think may have even been sponsored by the city of Ukiah, in October of 2015.”

He argued that, because the matter is scheduled to go to court in early June, it was unnecessary to appoint a receiver that day.

In the end, Judge Nichols disagreed, directing the clerk to stamp and file his order appointing a receiver as the lawyers were gathering their papers and putting on their coats. “Then you can undertake your duties now,” he told Adams.