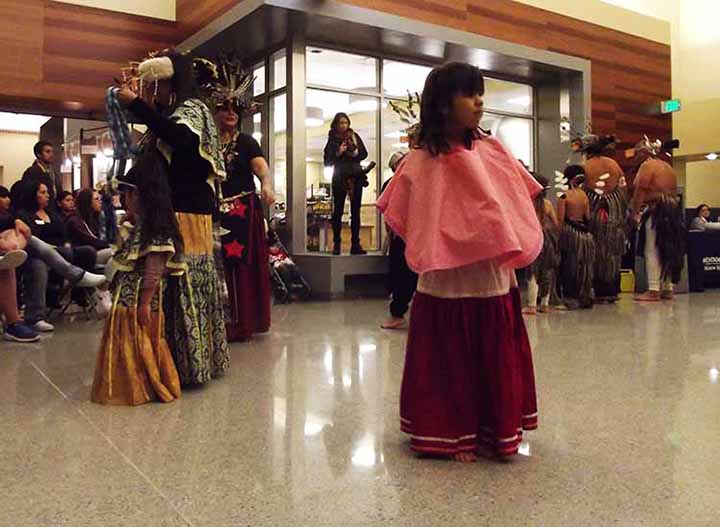 UKIAH 12/14/2016 — The Native American heritage celebration on November 30 at the Lowery Student Center on the Ukiah campus of Mendocino College focused on healing and traditional practices. Martin Martinez, a long time Native American spiritual advisor who offers traditional ceremonies to inmates and who is the director of the social services department at Redwood Valley Rancheria, opened the event with a nuanced blessing.

“Say thank you to something negative in your life,” he advised the dozens of people who gathered for games, dancing, and the tribal history. Presenters included keynote speaker Clayton Duncan, Mendocino College President Arturo Reyes, and Paul Murguia III, a substance abuse counselor who graduated from Mendocino College. “Let those who mess with you be your spirit helpers,” Martinez went on. “To show you what you shouldn’t do in life.” As he spoke, one of the ping-pong players in the next room put down his racket and came in to hear the rest of the blessing. “Grab this ugliness and bless it,” Martinez instructed. “Tell it, the next time you show up, I’m going to bless you again.” 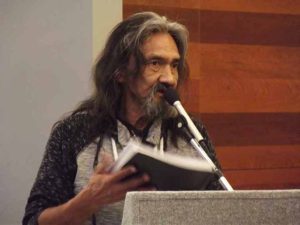 After this blessing and a song, Duncan took the microphone to tell the story of Bloody Island, the 1850 massacre of indigenous people at the north end of Clear Lake. He told the crowd that one of his ancestors, who was a little girl at the time, escaped the massacre and survived by hiding underneath the water and breathing through a tule reed. “I heard that story all my life,” he said. He then brought some personal history to bear by relating how for years, he yearned for revenge. “I wanted 30 million white men dead,” he said, but eventually decided that this would be disrespectful of his ancestress, who prayed for peace. He tied history to current events by predicting how the Standing Rock Sioux would stop the Dakota Access Pipeline. “They’re going to win because they’re doing it with prayer,” he said. “A lot of us are here now, offering skills. We should have been doing this, instead of going to Indian bars in Oakland.” 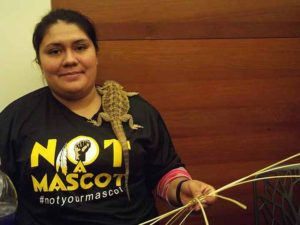 These activities included basket-weaving, taught by a group of young women wearing black T-shirts that declared, “Not a Mascot,” in large yellow letters. Cassandra Steele, of Pinoleville, said she was giving her first public demonstration of basket-weaving without her mentor, Christine Hamilton. 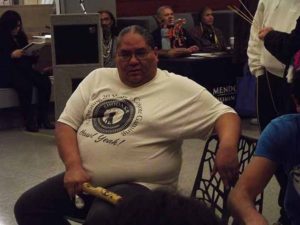 Tony Ramos, an elder of the Coyote Valley band of Pomo Indians, taught two rows of young people, including a couple of exchange students, how to play a hand game. This is an ancient game of skill and chance, where one team must guess where the other team has hidden a number of bones, or sticks, while the other team dances, sings, or plays music to distract them. In this case, Ramos, a serial winner at hand game tournaments, took it easy on the beginners and sang steadily while beating a clapper.

The game came to an end when the Round Valley feather Dancers emerged. The male dancers, both grown men and little boys, flipped their turkey feather capes and peered at the audience from behind masks made of flicker feathers. Female dancers of all ages gathered around them in a semi circle as musicians sang and beat drums. Finally, everyone present was invited to join the dancers, whether they were wearing regalia or not.

As Murguia observed in his talk about addiction and recovery, which included a jailhouse epiphany about helping others, “Life can be a very sad place, but there’s a lot of happiness.”