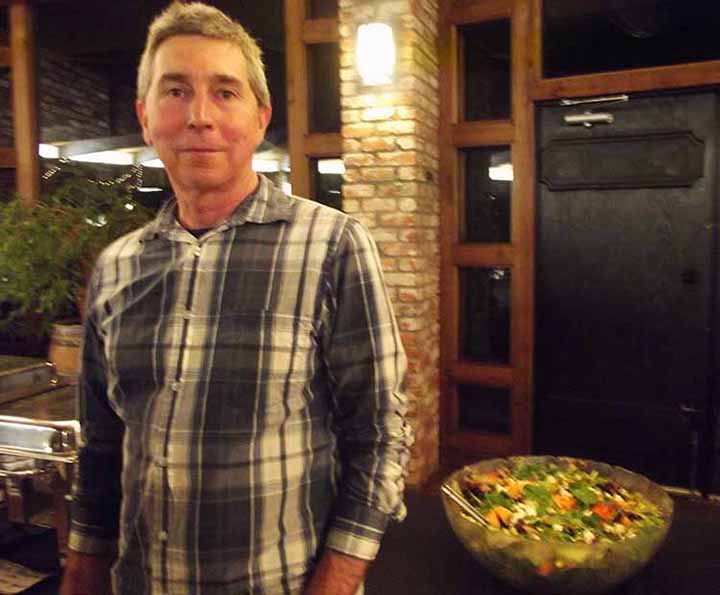 MENDOCINO Co. 12/14/2016 — Textures ranged from crunchy to creamy at a local farm to fork extravaganza last week. The roasted veggies, from seven local farms, provided a rainbow of flavors and hues. The salad dish, from Floodgate Farms, was a delectable color study, with its warm yellow flowers and mix of cool green.

And then there was the slow-roasted pork, which may have been a fierce-looking boar just a few days prior to its appearance at this elegant event. Now it got along most agreeably with thick green chimichurri sauce and heirloom corn polenta, which was flavored with apples, honey, and mushrooms both wild and tame.

The Good Farm Fund winter feast on December 8 at Barra Winery in Redwood Valley had something for everyone, from foodies to survivalists. 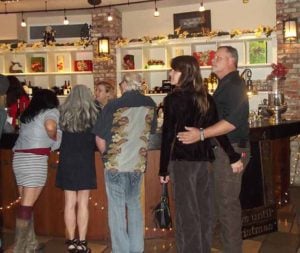 Guests belly up to the bar

The event was a fundraiser for grants for small farmers and the CalFresh match program. The first program, the Good Farm Fund, helps bring the food to the market, and the second helps to sell it, providing between $15 and $30 in matching funds to CalFresh recipients who shop at local farmers markets. Scott Cratty, president of the Mendocino County Farmers Market Association, explained that this program was “so cool and good, the government started to support it.” He added that the match program is “the best thing since sliced bread.”

That sliced bread would probably be farm fresh bread made with flour from the Mendocino Grain Project, since Cratty is also the co-founder of the non-profit Good Farm Fund, which is set to give out $20,000 worth of grants to local small farmers in the coming year. “If you grow broccoli, you get no subsidy,” Cratty explained. “But if you grow corn syrup” to make sweetener for unhealthy beverages, “you get a big subsidy.” Given the high land prices in Mendocino County and the lack of subsidies for broccoli-growers, he said, “at the end of the year, you’re probably on food stamps yourself.” 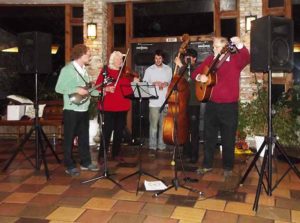 The dinner, with 160 ticketed guests, sold out a full day in advance. The menu read like a who’s who of local cuisine and small organic farmers, from small-scale operations to larger business efforts. Baguettes made with flour from the Mendocino Grain Project, near Ukiah, were adorned with chicken liver pate from Sisters’ Ridge Farm in Redwood Valley, cheese from Pennyroyal Farm in Boonville, and onion jam from Irene’s Garden in Laytonville. The Grange School of Adaptive Agriculture provided pumpkins for pies made by Kemmy’s, and North Coast Brewing Co. donated beer. 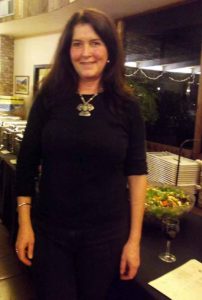 Bridget Harrington, co-owner of Patrona’s, a farm to fork gourmet eatery in Ukiah, told the crowd that supporting local farmers was an easy decision in uncertain times. “Help farmers grow, help the county grow,” she reasoned, adding that locally grown organic produce appeals to foodies, who are interested in produce that is “at the pinnacle of flavor,” as well as survivalists, who worry that “sooner or later, those trucks from Safeway won’t come up the 101 — there are three fundamental needs, and food is one of them.”

By Monday, Cratty had rough numbers from the event, which has grown each of the three years it’s taken place. He estimated the net take at about $12,000 or $13,000, though he still had to make his way through a few invoices. Thompson’s Party Rental supplied 200 plates, but with the 160 ticketed guests, plus kitchen staff, volunteers, and band members, he said, “we blew through the plates and had to feed the band and a few other people out of to-go boxes.” The recipients of the coming year’s grants have not yet been decided on, but for next year’s winter feast, Cratty hopes to announce the winners at the event and highlight their accomplishments.

Find out more about the Good Farm Fund on their website and Facebook page. And check out our quick video of the event here: