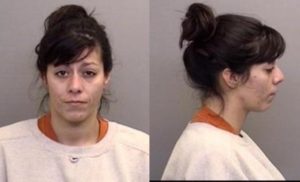 The following is a November 7 press release from the Mendocino Sheriff’s Department. The Mendocino Voice has not independently confirmed any of the information. All suspects are considered innocent until proven guilty.

The incident reportedly took place on the afternoon of November 5 during a traffic stop on Sherwood Hills Drive in Willits, during which a 25 year old woman was found to have two out-of-county misdemeanor warrants and in possession of brass knuckles. She was arrested and held on $40,000 bail.

Deputies contacted Amanda Jewell, who was the passenger in the vehicle. Deputies discovered Jewell had two active misdemeanor warrants for her arrest, which were out of Mendocino County.

Jewell was arrested on the warrants and found to be in possession of brass knuckles.  Jewell was subsequently arrested for Possession of Brass Knuckles and Violation of Probation.

Jewell was booked into the Mendocino County Jail where she was to be held in lieu of $40,000.00 bail.