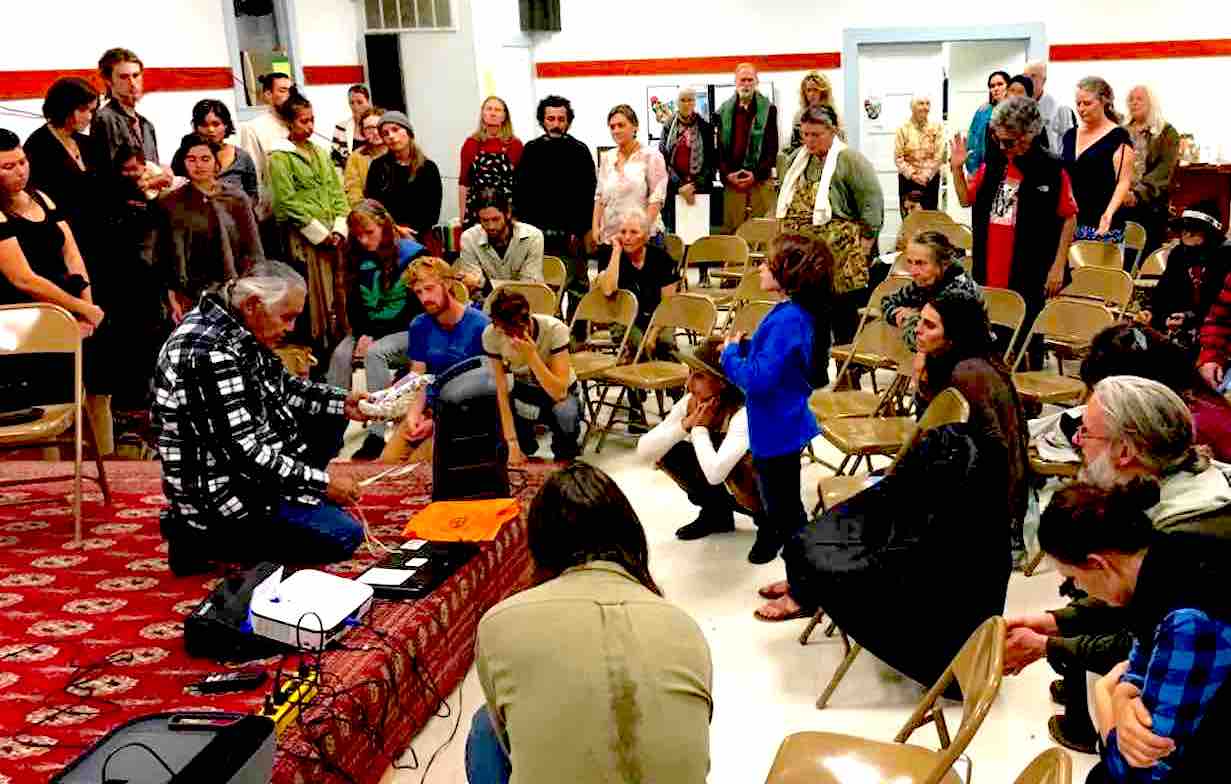 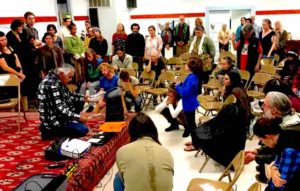 The event began and ended with a ceremony led by American Indian Movement Spiritual Leader Fred Short. Priscilla Hunter from the Coyote Valley Band of Pomo spoke about the environmental and historical connections between issues facing those at Standing Rock and local tribes, and journalist Will Parrish detailed how national banks are invested in the pipeline project. The event also featured several speakers who had travelled to the camps at Standing Rock Sioux tribal lands in North Dakota and who shared their experiences. Activists there, known as water protectors, are hoping to halt the Dakota Access Pipeline (DAPL), a four state, 1,172 mile construction route, near[footnote]The dispute was sparked after a the path of the pipeline was rerouted to pass through areas that the Sioux claim as tribal land and as sacred land. A further wrinkle in the controversy is the fact that due to varying interpretations of an 1851 treaty with the Sioux, the boundaries of their land are disputed.[/footnote] the Sioux tribal lands, pointing to potential environmental threats, such as contamination of the Missouri River, an important water source for many in the region. 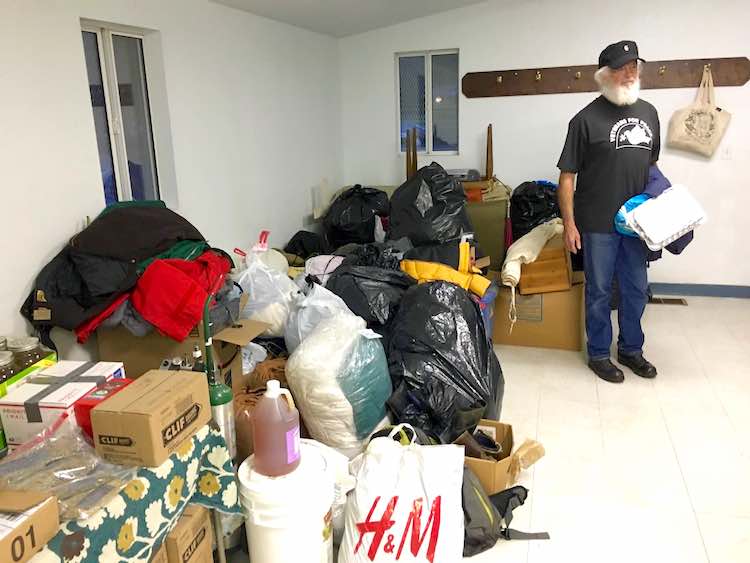 A mountain of donated supplies of winter and camping gear to be sent to Standing Rock campers. 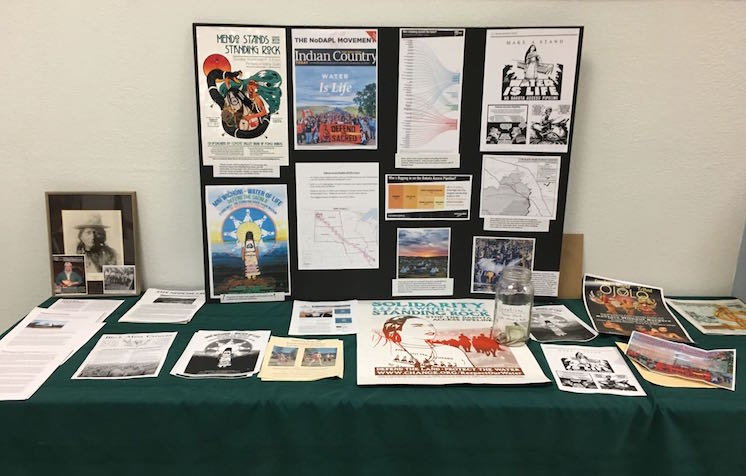 An informational table was set up about the movement against DAPL. 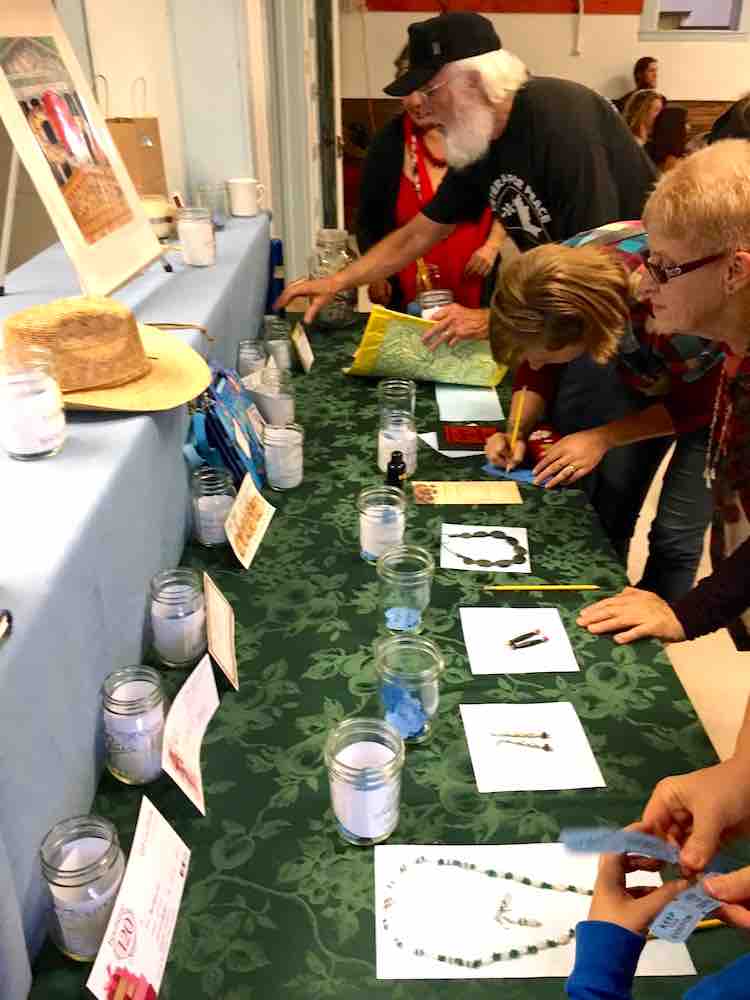 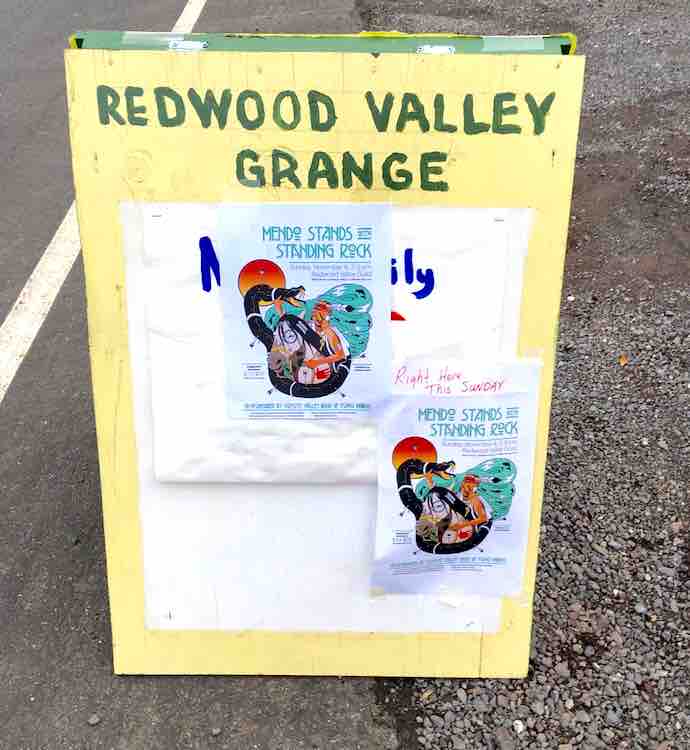 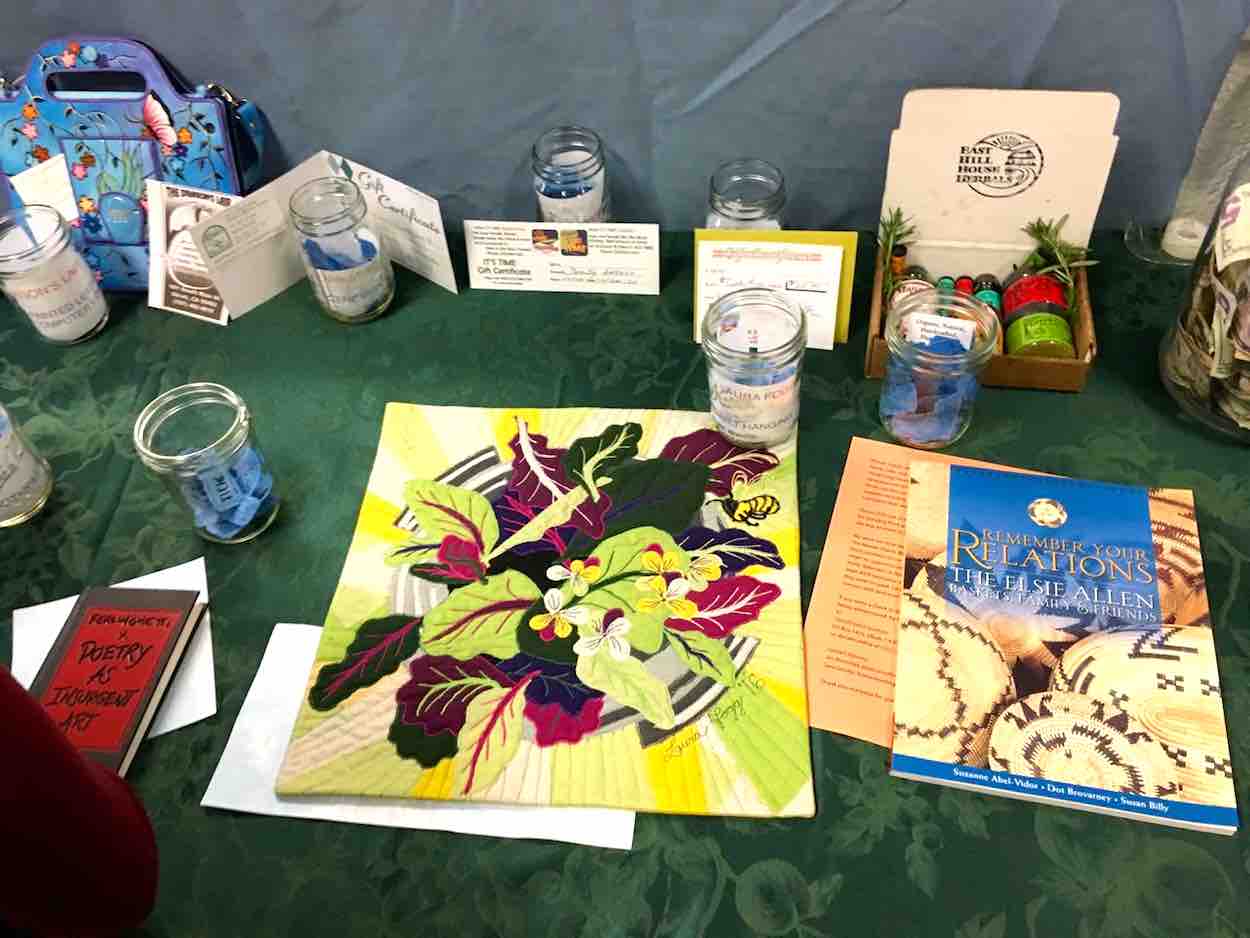 Local businesses and artists donated to the raffle to raise funds for support trips and legal aid for the Standing Rock campers. 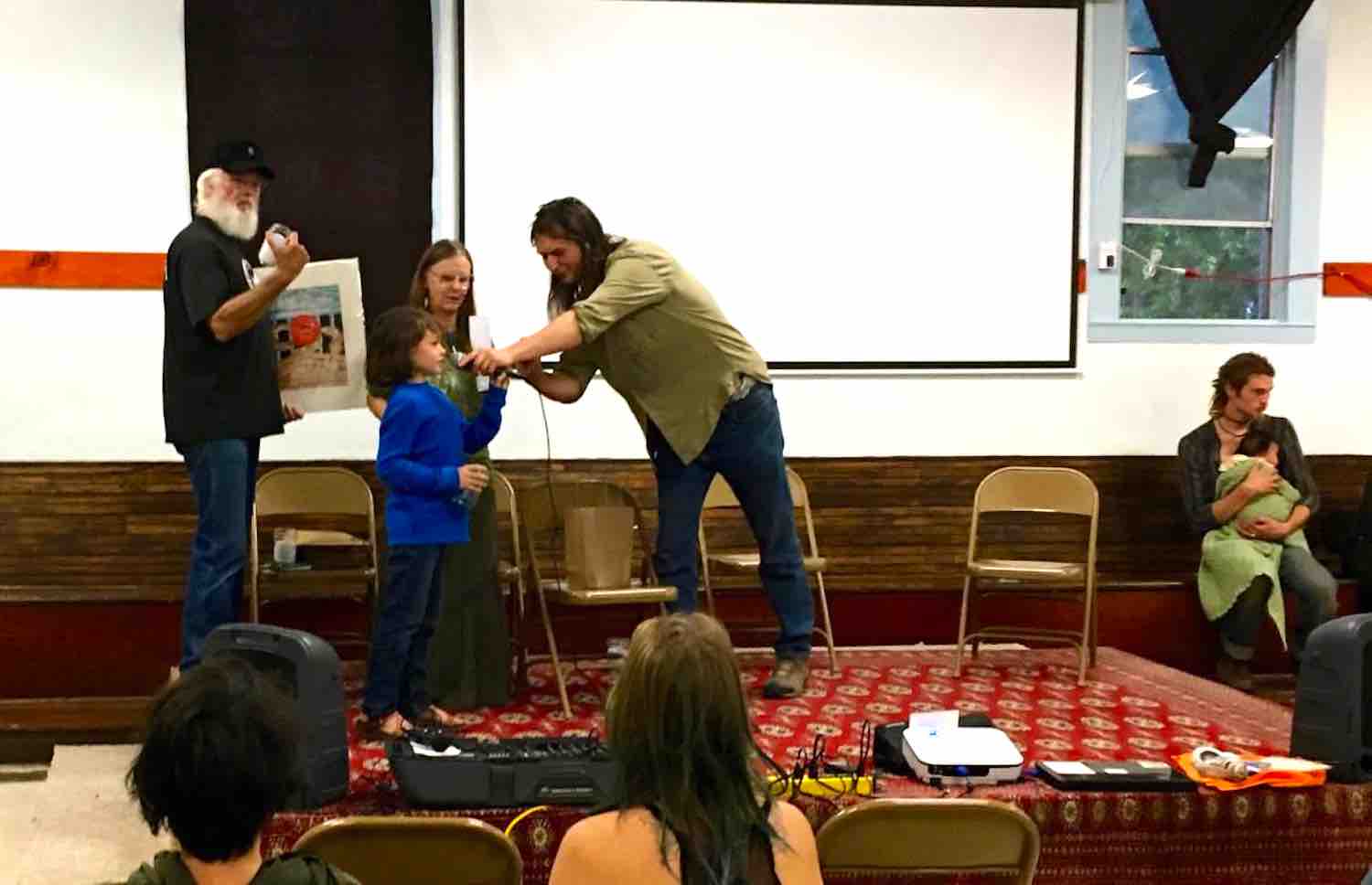 One of the younger attendees helped call out raffle prize winners. 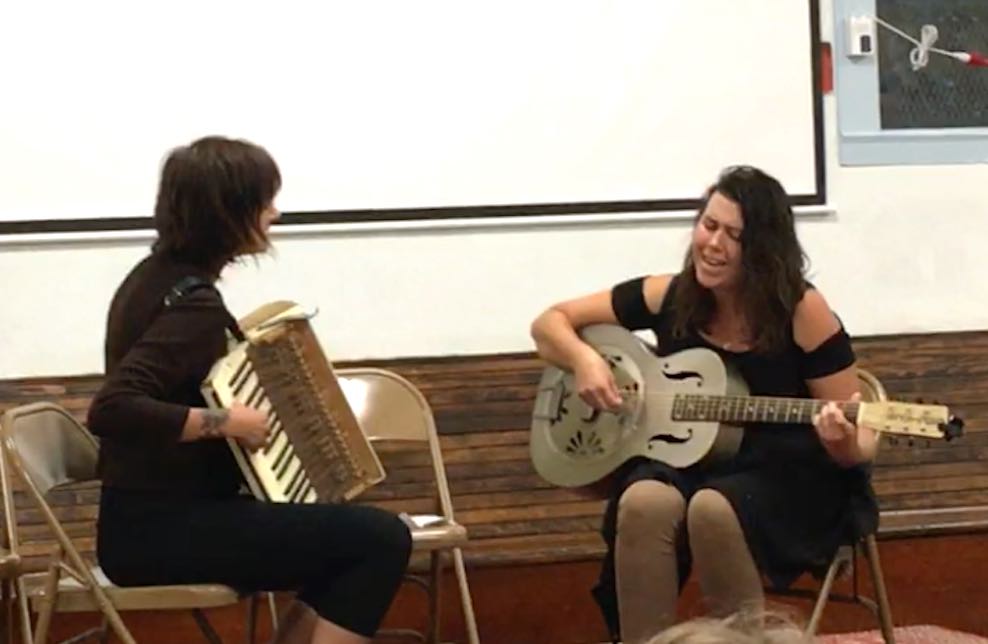 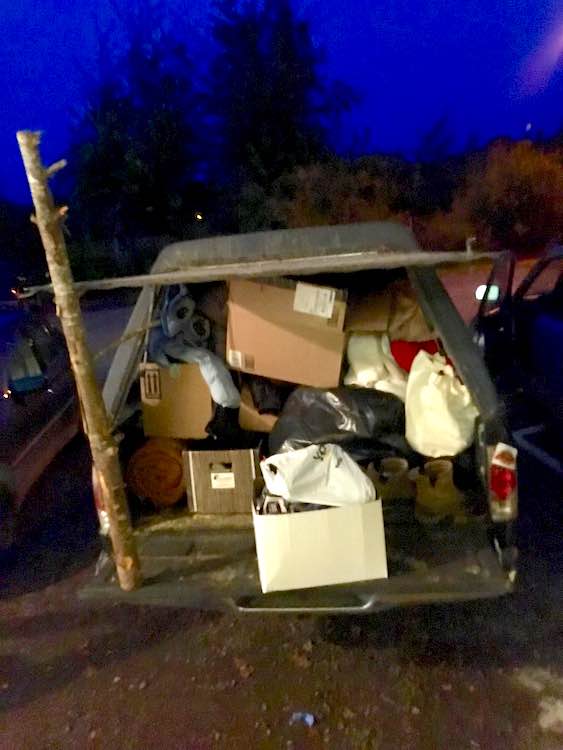 A truck full of donated supplies at the event's end.

“It’s all about the community, and they really support it,” said another organizer, Maria Billsborrow. Many Mendocino residents have made trips with donations to Standing Rock in the last two months, and at least two have been arrested while there. More Mendonesians and other residents of the North Coast are planning trips in the next two weeks.

Over the last several months, activists from many other tribes and supporters from around the world have traveled to North Dakota, and hundreds have been arrested, including journalists, politicians, and celebrities. The United Nations recently visited the camps to investigate potential human rights abuses by police defending the construction’s path. According to the New York Times, pipeline owners Energy Transfer says the pipeline will put millions into local economies and create up to 12,000 jobs, though many won’t be permanent.

Sandy Turner, a teacher for the Ukiah Unified School District, travelled with two others to North Dakota at the end of September and spent a week at the Standing Rock camps. Noting it was very windy in North Dakota in early October, Turner described to an attentive audience what it was like inside one of the canvas tents set up as a schoolroom for the children in the camps. He also talked about how the experience drove home for him the importance of preserving water sources as he swam in the Missouri River and used the limited water resources at the camp. Taylor said in an interview that he’d been sharing his experiences with the kids he teaches in history classes, who were familiar with the controversy over the pipeline.

There’s just been so much community response to this,” said Burnstad of the movement against DAPL. “I think we are just one little bubble, but there are a lot of bubbles like this everywhere around the world.” Events in support of Standing Rock have been held around the region and country over the last several months. Locally, these events included a ceremony and send-off in Ukiah for a Mendocino caravan in September, which raised almost $3,000, and several events in Humboldt including a march in Eureka November 5. Another Mendocino benefit, a samba workshop, is planned for Saturday, December 3 in Caspar.

The event also included several musical performances and an extensive and tasty spread contributed and served by volunteers to raise funds. A raffle funding travellers to Standing Rock and the camp’s legal aid offered prizes including artwork, jewelry, herbal medicines, and donations from local businesses. One of the event’s musicians, Burl Wood, encouraged donations of herbal medicine for the campers, which she will be delivering on a trip next week.

The back room of the Grange was filled up with bags of donated winter clothes, camping gear, insulate tipis, and other requested supplies for the campers, which activists will drive to the camps over the next few weeks. Burnstad said she had been coordinating with people heading to Standing Rock and those sending in donations, and encouraged those planning a trip to contact her if they had space for supplies. At first count the event raised at least $5,000, which didn’t include food sales and donation jars, but did include one donation of a $1,000 check.

There are several upcoming fundraising events planned to support the activists, including a December 3 Samba workshop at the Caspar Community Center from 2 pm – 4 pm. Several caravans travelling to Standing Rock are seeking donations or additional travellers. More information will be posted on the “Mendo Stands with Standing Rock” Facebook group. Those interested in donating or coordinating with caravans can contact Burnstad at [email protected] or Sara Grusky at [email protected]