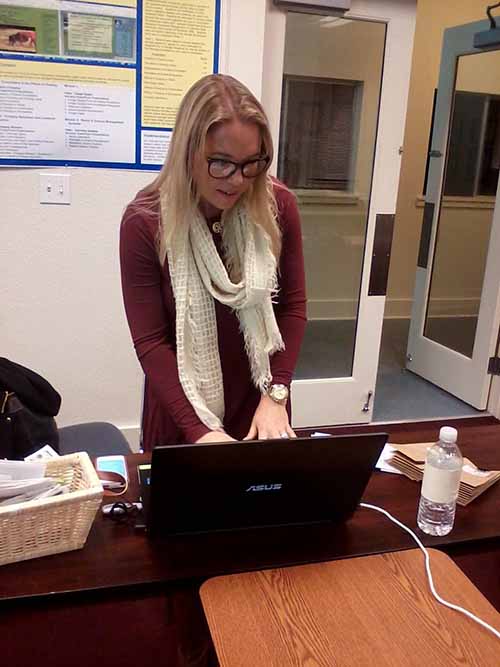 UKIAH — The Mendocino Council of Governments (MCOG) held a workshop in the UC Farm Advisor’s Conference Room on Monday evening, to gather public comment for its quadrennial update to the Regional Transportation Plan, which will contain a section for walking and biking infrastructure. The plan will form the basis for any new additions or changes to the public transportation infrastructure of Mendocino County for the next four years.

According to the MCOG budget for Fiscal Year 2016-17, the total revenue available to MCOG is $7,405,160. Four grants, plus 2% of Local Transportation Funds, which come from a countywide quarter-cent sales tax, could direct a total of $1,739,803 to bicycle and pedestrian projects. The Mendocino Transit Authority (MTA), which has 32 unmet needs, has also applied on its own to receive federal funds to expand services. The transit budget proposal, as administered through MCOG, is $3,876,497. The only eligible claimant for State Transit Assistance funds in Mendocino is MTA, though other funding sources are also available.

MCOG is a joint powers authority (JPA) [footnote]JPAs are government entities formed by two or more governments coming together to share authority and work on some issue together. They are distinct from special districts, in that, whereas districts are their own government entities deriving power from the people, and generally having elected boards, JPAs are created as a joint project between two existing governments.[/footnote] formed in 1972 for the purpose of transportation planning, identifying and developing transportation projects, and distributing state and federal grants for those projects. All projects must adhere to the transportation plan, which is updated every four years. Barrett said she is aiming to have a draft of this update done by the summer of 2017, and is hoping for a final a few months later.

MCOG is overseen by a board composed of County Supervisors Dan Gjerde and Tom Woodhouse, one city councilmember from each of the four incorporated cities in the county (Ukiah, Willits, Fort Bragg and Point Arena), and one county employee (Assessor-Clerk-Recorder Susan Ranochak). The MCOG board members were not present at the public workshop. The Executive Director of MCOG is Philip Dow, of Dow and Associates, a private firm based in Ukiah that creates budgets and reports for MCOG and for the Lake County Council of Governments (LCCOG). Davey-Bates Consulting, also in Ukiah, carries out the planning tasks for MCOG and LCCOG. This practice of having private companies conduct planning is common, as another example of government planning services undertaken by a consulting firm, LACO Associates, which has offices in Ukiah, Eureka, and Santa Rosa, is preparing the project description for the county’s cannabis cultivation ordinance and zoning regulations.

MCOG manages four state grants through a program that focuses on non-motorized travel, especially walking and biking. The grants, allocated in Fiscal Years 2014-15 and 2015-16, add up to $1,680,000, and have largely been used in the Covelo area, for the development of a multi-purpose trail that will run parallel to State Route 162 in the Round Valley. The trail, said Barrett, is “a real project now,” which means that it is beyond the planning phase and is in the process of development and environmental review. Ultimately, the plan for the trail is to run from Howard Street to Biggar Lane, then north to Hurt Road. A great deal of the trail will run through Tribal lands, and another portion will be within a state right-of-way along the highway. An east-west trail within Tribal lands is planned to connect Henderson Lane with the main portion of the trail.

The grant includes non-infrastructure components, such as education about bike safety, which will be addressed in the next few years by the North Coast Opportunities (NCO) Walk Bike Mendocino program.

At Monday’s workshop, Program Manager Nephele Barrett, of Davey-Bates Consulting, recorded public comment as part of the effort to identify the needs of the community. The comments will be incorporated into a draft plan, which will be subject to public and agency review. Meetings are taking place all around the county, though Barrett noted they have been sparsely attended. Three people took part in a recent workshop in Fort Bragg, and six people, including two city government officials, came to the one in Ukiah.

Tarney Sheldon, a Project Manager at NCO, spoke up in favor of the Ukiah Streetscape project, which she hopes will reduce the “four lanes of craziness” that could be mitigated by pedestrian bulb-outs and a left-turn lane on State Street, among other proposed modifications.

Barrett replied that the project has been delayed, due to dwindling funding from the state. This consists largely of the excise tax on gasoline, which the California State Board of Equalization brought down $.022 a gallon earlier this year. With greater fuel efficiency and the rising cost of projects, she explained, less money is available to address transportation projects at the county level.

Transportation includes public transit, most evident in the large MTA buses, which can be seen trundling along their routes, often with very few passengers on board. Dow maintained that these larger vehicles are the only ones that can withstand the wear and tear they are are subjected to on the mix of city and county roads, which are in various states or repair or disrepair.

The Transit Productivity Committee, which is made up of Fourth District Supervisor Dan Gjerde and Ukiah Mayor Steve Scalmanini, of the MCOG Board, and Jim Mastin and Jim Tarbell, of the MTA Board, and Charles Bush, of Redwood Coast Seniors, met in May to address 32 needs and recommendations for the transit system. While these needs were identified through MCOG’s Unmet Needs Process, MCOG declined to apply for a federal grant on MTA’s behalf to address these, citing a large workload and the fact that transit operators are eligible to apply on their own.

According to an MCOG press release, MTA recently received a $300,000 federal grant through the California Department of Transportation, enabling it to increase service on Route 65, from Mendocino to Santa Rosa, and between Fort Bragg and Willits. Buses will also depart ten minutes earlier from Fort Bragg and Ukiah, to improve the connection between Route 65 and Golden Gate Transit to San Francisco.

The next public workshop, where citizens will have a chance to weigh in on transportation plans, will be at the Willits Community Center on 111 Commercial Street at 5:30pm on November 7. Workshops in Point Arena and Covelo will take place later in the same month.